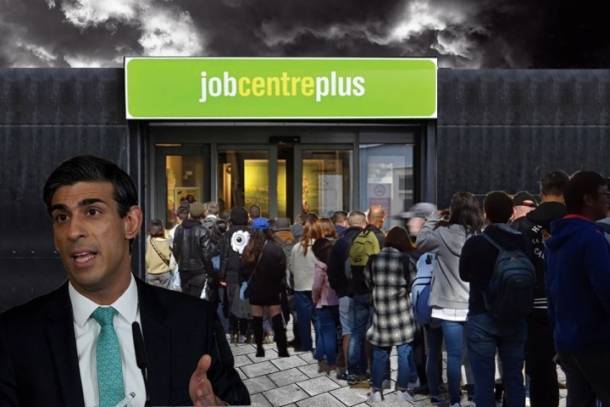 There has been a great deal of fanfare about the government’s pledges to protect workers and small businesses through this crisis. But, in reality, ordinary people have been left high-and-dry. We must make the bosses pay.

The Tory government has made substantial noises over their financial response to the coronavirus crisis. The new Chancellor, Rishi Sunak, has opened the floodgates on state spending, rolling out programmes aimed at covering the wages of contracted workers and the self-employed, along with promises of government backed loans to keep businesses afloat.

But when you scratch away the veneer of daily televised self-congratulation by the Tories, the picture is not so rosy. This is despite measures brought in by the government aimed at stopping businesses from sinking. Rishi Sunak promised that businesses would be able to go to a bank and take out a government-backed coronavirus interruption loan, in order to stay afloat.

With a massive backlog of companies desperately looking to take out loans, however, many have been unable to even get through to a bank in order to apply for a loan. Meanwhile, many more are being told that they are ineligible to receive any loans.

Money lenders are also exploiting the high demand for loans by demanding extortionate interest rates, with reports of interest rates of up to 30%. High street banks like Barclays are currently charging anything between 7% and 12%, despite the Bank of England’s base rate now being set at a historic low of just 0.1%. Officially, the government has taken measures to ensure that those out of work during the crisis will continue to receive pay. But these do not go nearly far enough, and will leave thousands of workers high and dry.

The ‘job retention scheme’ allows ‘furloughed’ workers to receive 80% of their wages. This means that businesses do not have to lay-off workers, as the government should cover their pay.

However, this does not provide any cover for workers who are not ‘furloughed’, but who still have their hours cut. Many non-essential businesses have continued to stay open despite the lockdown. Those workers have no protection if their hours are cut.

At the same time, many care facilities are not closed. Workers who must take time off to look after former residents of these care homes also do not receive anything from this scheme.

Furthermore, many are working in businesses that are going to go under throughout the course of the pandemic. These employees face the prospect of unemployment as soon as the pandemic is over, when temporary government protections are eventually withdrawn.

Elsewhere, there is the ‘self-employed income support scheme’, announced by Sunak last Thursday. This also promises to pay 80% of expected net-income. But the programme won’t begin processing payments until June.

All of this has led to a surge in demand for universal credit. In the last two weeks almost a million people have applied for this state support. The DWP has redeployed thousands of staff in order to process claims.

Socialist Appeal spoke to one DWP (Department for Work and Pensions) employee. In their local Job Centre, this worker said, they were “adopting leaner processes, cutting out some of the bureaucratic measures and trusting in the public”, in order to more quickly process claims. Most cases were being processed without the required evidence, which will be asked for at a later date. However, in many centres they are still sticking more rigidly to the rules.

Normally it takes a few weeks to train up employees to process Universal Credit claims, this DWP worker said. But now they are having to fast-track the training process and bring in workers responsible for administering alternative benefits, in order to streamline the process.

These measures have helped to make this employee’s job centres the fastest in the area for processing claims. Yet they are still receiving far more new applications each day than they are able to process. As a result, some people are having to wait days before their claim can even be looked at, let alone receiving any payment.

Universal Credit is only £94 a week and 1 in 4 people don't have any savings.

It will push people into poverty or force them to work when they shouldn't. The working class will be presented with the bill from government borrowing / Image: PCSThe situation facing the working class is dire. Even where workers are able to receive 80% of their usual wages, this is still a 20% reduction in pay. But people still have put food on the table, keep a roof over their heads, and pay their bills. This is going to push thousands - if not millions - more into poverty.

The government’s relief package represents a desperate attempt by the ruling class to keep the economy running in this period of crisis. In effect, the Tories are putting the bosses’ system on life support by covering workers’ wages and funnelling billions towards struggling businesses.

The last decade of ‘fiscal responsibility’ has been thrown out of the window, with Johnson’s government frantically trying to patch up the system as it collapses around them.

All of the money the government is spending now is through public borrowing. And all of it will have to be paid back at a later date, with interest. Just like after the 2008 crisis, it will be the working class that is presented with the bill, through widespread cuts to public services and attacks on living standards and working conditions.

We say: make the bosses pay for this crisis! It is big business who should cover the costs of workers’ wages, out of their accumulated profits. UK corporations are sitting on a mountain of cash - £700 billion by some estimates. This ‘magic money tree’ should now be firmly shaken.

Instead of building up the national debt today and paying it back through austerity tomorrow, we should expropriate this wealth that is sitting idly in the hands of the bankers, bosses, and big business. We have entered into a vicious cycle, comparable to the Great Depression / Image: fair useEven with the desperate measures being undertaken across the world, however, the ruling class will not save the economy. We are entering into the deepest crisis in the history of capitalism. This is no time for half-measures.

We have entered into a vicious cycle, comparable to the Great Depression. A return to the 1930s: this is the prospect facing the working class in Britain and internationally in the coming period.

Only the socialist transformation of society can offer a way out for humanity. This means expropriating the enormous wealth concentrated at the top of society in the hands of a tiny minority, and democratically planning the economy in the interests of ordinary people.