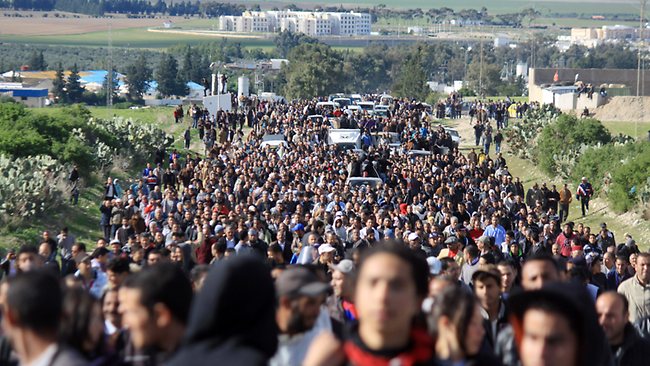 Clashes between  protesters and the armed forces continue as the Tunisian town of Siliana enters the fourth day of a general strike led by the UGTT trade union federation. The clashes which have led to more than 300 injured have become a focal point for people all over Tunisia.

Today, like the previous days, thousands of people took to the streets. The protesters are demanding the removal of Siliana governor Ahmed Zine Mahjoubi and that something be done about the high poverty and unemployment that exists in the region. They are also calling for the release of 14 people arrested 20 months ago and still being held without trial.

On Thursday the country’s National Guard deployed armoured vehicles as protesters erected makeshift barricades in the streets. On Friday morning the streets of the town were littered with stones and the charred remains of barricades which had been put up in the previous days. Residents also set up roadblocks on the highway leading to Tunis.

As one of the participants told AP, “I am a higher educated person and I still do not have a job; I’ve been unemployed since 2009. I am participating in this march to push the authorities to find solutions to our social problems and to penalize those who shot and blinded protesters.”

The police and army units have been using live ammunition in the form of buckshot that has left 15 people at risk of going blind. Explaining the use of violence by security forces, Interior Minister Ali Laarayed stated that events in Siliana are the product of violent attacks by citizens and that the security forces were obliged to resort to using buckshot in order to defend themselves.

France 24 reporter, David Thomson, who was one of the many journalists who were also attacked, had a different account of the events. According to him, “There was a disproportionate use of force by security forces. I see no necessity to resort to firearms, especially if protesters did not use Molotov cocktails or tear gas. These young people are just calling to improve their situations and to be employed.”

Thursday people also poured in from neighbouring towns to join the march and there were also demonstrations in solidarity with Siliana throughout the province – including attacks on police posts and headquarters of the Ennahda Party. Today a delegation was also expected from Sidi Bouzid – the city in which the first protests of the Arab revolution took place.

According to witnesses in Gaafour, north of Siliana, protesters hurled rocks at police and army trucks heading to the town, forcing some of them to turn back. In the town of Kesra protesters reportedly attacked and torched a security post and two police vehicles. Also, offices of the ruling Islamist party Ennahda in the town were attacked and documents burned.

Solidarity protests also took place in other cities, such as Mahdia, Sfax, and Tunis. In Tunis hundreds of people have gathered for several days in front of the Ministry of Interior in the centre of Tunis screaming ‘dégage.’ (“Leave!” a slogan initially used against the overthrown dictator Ben Ali at the beginning of the Tunisian Revolution).

One of the main concerns raised by the protesters was the chronic mismanagement of development funds in the poor farming region, especially the unemployment schemes. Siliana, which lies 75 miles south of the capital Tunis on the edge of the Sahara desert, saw investment plummet by 44.5 percent from January to October on a year-over-year basis. Unemployment in the region stands above 50 percent and the situation has only worsened since the revolution of 2011.

On Thursday, Interim Prime Minister Hamadi Jebali gave a live televised message to the protesters where he refused to dismiss Siliana’s governor and at the same time called for the people of region to be “realistic” and not expect that the economic crisis will be solved immediately. “Do you think there will be investment in regions with violence?” he asked. “We are all losers.”

It is clear that not all Tunisians are “losers”. There is a stark contrast between the luxurious lives of the Tunisian capitalists and the Ennahda politicians and the poor unemployed youth of the middle regions of the country. But at the same time Jebali is reflecting a certain truth in the sense that Tunisian capitalism cannot afford to raise living standards and solve the question of unemployment. The way forward is to break with the system and expropriate the commanding heights of the economy which are still in the hands of the old rulers of the country.

To this an activist replied on Twitter: “Mr. Jebali that “dégage” is what brought you to power and took you out of prisons, and if it wasn’t for that dégage you wouldn’t be giving this speech right now Mr. ‘Legitimate’.”

It is clear that the Tunisian bourgeoisie is manoeuvring to betray the revolution, but the Tunisian masses are confident in their own powers. They can remember who brought down Ben Ali and they understand that they can do it again.