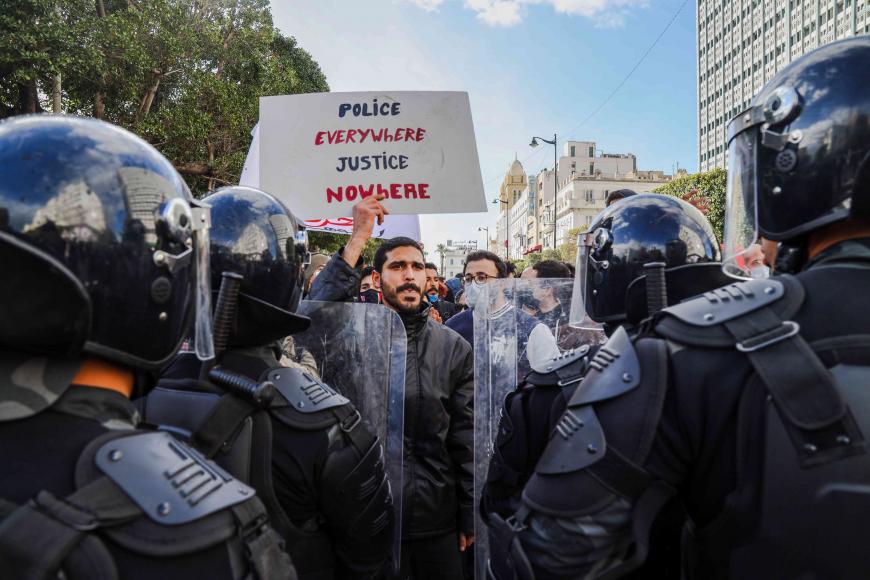 On 6 February, thousands of protesters took to the streets in Tunis, chanting the slogan “the people want the fall of the regime” against the Islamist Ennahdha party, a member of the government coalition. Riot police had in advance of the rally deployed cordons around central Tunis preventing both cars and people from entering the streets around Avenue Habib Bourguiba, where the demonstration took place. Despite these efforts, the protest was one of the biggest protests in recent years.

The protest took place in defiance of the lockdown that the government imposed the previous month in an attempt to prevent a general movement from erupting in commemoration of the 2011 revolution. Ironically, this manoeuvre in itself proved to be a contributing factor in the eruption of a new movement. During the last three weeks Tunisia has been shaken by a powerful protest movement, primarily consisting of the youth, who are demanding economic and political changes, and an end to police brutality.

The rally on 6 February was, unlike the previous protests, called by the big UGTT union to mark the anniversary of the killing of the left-wing activist Chokri Belaid, who was killed outside his home in 2013. The protesters used this opportunity to express their anger over miserable economic conditions, a corrupt political elite and the use of police violence against thousands of people arrested during the last three weeks of protests.

On 19 January, a powerful youth movement erupted which quickly spread to the whole of Tunisia, almost exactly 10 years after the 2011 revolution that overthrew the despot Ben Ali. The youth have been forced to take action as the economic crisis has eroded living standards and condemned 36 percent of young people to unemployment. The Tunisian ruling class and their political representatives responded to the protestors’ demands with brute force.

The military was sent in to patrol the streets of working-class neighborhoods; and France, the old colonial master, aided the Tunisian government by sending 60 police trucks to quell the protests. It is not the only time in recent history that France has taken an active interest in the suppression of the masses of their former colony. During the 2011 revolution, Michèle Alliot-Marie, then Minister of Foreign Affairs, offered Ben Ali France’s help to quell the uprising in Tunisia. With the backing of Western imperialism, the Tunisian state unleashed the brutality of the police.

🇹🇳 Hundreds of people took to the streets in Tunisia to protest against the government and the country's ongoing economic crisis, as well as to demand the release of those arrested during protests earlier this year pic.twitter.com/KDxKb6HS3A

During the more than three weeks of protests over 1,680 protesters have been arrested, 600 of them minors, and on 25 January Haykel Rachdi, a protester, was killed by riot police when he was shot in the head with a tear gas canister. News of the violations of protesters’ rights in the custody of the police, “amounting to torture”, have surfaced. All the so-called “democratic” Western powers have looked the other way.

By the end of January, it appeared that the government had succeeded in suppressing the movement, and that the momentum had begun to fade away. The lack of revolutionary leadership, with experience of how to advance the struggle on a class basis, had left the ruling class with the initiative, and they thus began a crackdown on the Tunisian revolutionary youth and left-wingers in general. For instance, four activists from UGET (General Union of Tunisian Students) were on 1 February kidnapped by the police while in a taxi. And on 3 February, Rami Riahi, a communist activist, was arrested due to a Facebook post perceived as offensive to the police. The experiences of the last weeks prove once more that the state is an organ of class rule, an organ for the oppression of one class by another.

While thousands of Tunisia’s revolutionary youth felt the brutality of the Tunisian state, the government celebrated what they saw as a victory. On 5 February, prime minister Hichem Mechichi met with a delegation from one of the police unions and saluted “the professionalism shown by police in dealing with recent protests”. The ruling class and their political representatives should however not celebrate too soon. They may have won the initial battle, but the war is far from over.

The role of UGTT

The rally on Saturday was, unlike the protests which have spread across Tunisia in recent weeks, organised by UGTT (Tunisian General Labour Union): the country’s most-powerful trade union federation. UGTT announced that they called the demonstration to protect the democratic rights that the Tunisian masses had won in the 2011 revolution. As Marxists, we agree that the democratic rights that the Tunisian workers and youth won in the 2011 revolution should indeed be defended, as these provide the Tunisian masses with new channels to develop their struggles against the Tunisian ruling class and their imperialist backers.

It is however curious that the UGTT leadership has now, suddenly, after a month of mass protests and brutal state repression, realised the need to defend democratic rights. In January, the UGTT tops denounced the ongoing protest movement and blamed the youth, not the police, for the violence, clashes, and confrontations! The UGTT leadership has not only failed to acknowledge the legitimate frustrations of the youth but has also discredited them. Instead of calling on the working class to join the ongoing protests, and link up the powerful workers’ movement with the revolutionary energy of the youth, UGTT placed itself on the same side as the Tunisian ruling class and the political elite.

The actions of UGTT during the last couple of weeks indicate that the leadership has deliberately attempted to keep the struggle of the youth and the workers separated. On 17 January, UGTT staged a one-day nationwide strike amongst Tunisnan rail, bus and air traffic workers. The strike was effective and put considerable pressure on the government, which is precisely why the strike should have been extended to an indefinite strike, and furthermore linked to the ongoing protest movement. Such actions would have massively increased the pressure on the government, and could have decisively shifted the balance of force in the streets in the favour of the masses.

But instead, the UGTT tops ended the strike and announced that a two-day nationwide strike instead would be staged one month later! The Tunisian rail, bus and air traffic workers will thus go on strike on 20-21 February (a Saturday and Sunday). This strategy from the UGTT tops cannot be seen as anything else than an attempt to divert the struggle of the workers away from that of the youth, and postpone it to a moment that is less dangerous for the overall stability of the capitalist system in Tunisia. Under the current leadership, UGTT is not a revolutionary force but a pillar of support for Tunisian capitalism, which is clearly illustrated in their participation in the National Dialogue Quartet: a class-collaboration initiative in which UGTT together with employers’ institute, the Tunisian human rights league and the bar association, collaborated to stabilise Tunisian capitalism after the 2011 revolution, to make sure that the revolution stayed within the limits of bourgeois democracy.

So why did UGTT then call on the demonstration on Saturday? Indications suggest that discontent with the position of the union was growing from below. On 30 January, five sectorial branches of UGTT published a joint statement expressing their support for the protest movement. The UGTT top made a calculated move. They could feel the pressure building and in an opportunist manner decided to act in order to secure their personal position and the continued support of UGTT amongst the Tunisian working class.

But one cannot confuse the motivations of the protestors with those of the UGTT top. The impressive number of protestors who turned out for the rally on Saturday, despite the risk of being subject to the vicious police brutality, is a testimony to the militancy and courage of the Tunisian masses who remain determined to fight for a better life. The experiences of the last 10 years (including those of the last few weeks) prove the need for a revolutionary party to carry the struggle of the Tunisnan masses to a revolutionary conclusion.

The need for a revolutionary leadership

Tunisian capitalism is going through a deep crisis, which has manifested itself in all corners of the state and society. The impasse of the system is clearly expressed as a decline of faith in the morals and ideas which legitimise the system, an important one being religion. Almost constantly since the 2011 revolution, the Islamist capitalist Ennahdha party has been the governing party or in a coalition with “secular” capitalist parties. It is therefore noteworthy that religion is in decline in Tunisia.

In 2013 only 16 percent of Tunisians considered themselves as non religious. By 2018 this had grown to 31 percent and amongst the youth the figure was as high as 50 percent! This development reflects a general rejection of the current system, and it is not hard to understand why. The capitalist system cannot offer the Tunisian masses anything but falling living standards and police oppression. It is not accidental that one of the chants at demonstrations in January was: "Neither police nor Islamists, the people want revolution".

The 2011 revolution has proved that the issues of the Tunisisan people only can be satisfied by overthrowing capitalism. As long as capitalism remains there is no end in sight for the suffering of the workers and youth in North Africa and the Middle East. The Tunisian workers and youth have time and again proven that they are willing to fight to change society radically and ready to take their destiny into their own hands. What they need to succeed is a revolutionary leadership, which can unite the struggles of the Tunisian youth and workers on a socialist programme.

As long as a revolutionary leadership does not exist, the initiative of leading future movements will fall on the shoulders of the current leaders of organisations such as UGTT, who refuse to break the confines of capitalism. The lesson of the last few weeks is that it is necessary to build a revolutionary organisation with roots in the working class before the next revolutionary movement breaks out. The task of the youth and workers of Tunisia is therefore to study the experiences of the working class and to build a Marxist leadership, capable of leading the coming revolutionary movements towards conquering power.