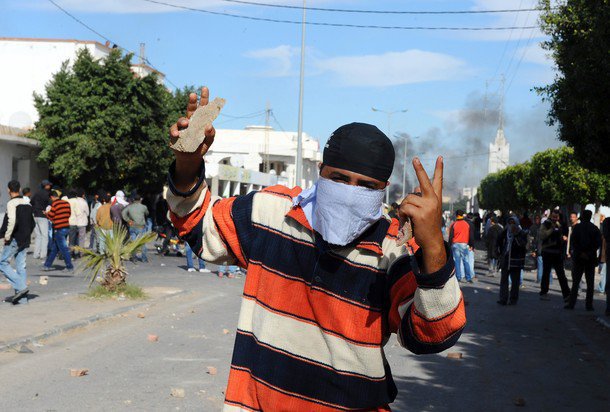 The marvellous uprising of the Tunisian people has taken on revolutionary proportions. The coldblooded murder of more than 20 demonstrators by the police over the weekend did not have the effect the dictatorship hoped it would have. The result was not fewer demonstrations but more with even more people taking part who were more determined than ever not to be intimidated any longer. One thing is sure now: this tug of war with the dictatorship will be waged until the very end by the masses.

Regional strikes have paralysed many cities in the central and eastern parts of the country. Violent clashes with the police, just like the scenes from the Intifada in Gaza, have continued without interruption in the neighbourhoods of many cities. In the space of a few days the movement has grown to unprecedented levels in recent Tunisian history. The volleys of bullets fired by the police continue to kill but do not to scare the masses anymore. In total more than 60 youth and workers have been murdered in the attempt to break the new spirit of struggle. This will all be in vain. More importantly the workers have started to move via their union, the UGTT, whose docile leadership has been forced to enter into opposition to the regime. Local and regional branches of the UGTT have taken the initiative to call strikes. The mass rallies have been like virtual occupations of cities.

Some sections of the union, like the teachers, the health workers and postal workers had already played an important role in pushing the UGTT into action. Journalists’ unions and the lawyers’ associations have also been in the forefront of the struggle. But now the wider layers of the workers’ movement have moved into action. Demonstrations like the ones in the rebellious workers’ city of Sfax or in Kassarine mark the active entry of the workers onto the scene. The images of those demonstrations reveal an attitude of open defiance towards the regime, a mood of confidence and a feeling that victory is within reach.

Already last Sunday, January 9, the UGTT local affiliate in Sfax issued a call for a regional general strike. With only a few exceptions (hospitals and many bakeries that stayed open to help the people in struggle), the strike saw a 100% turnout. In Sfax 30,000 workers and youths demonstrated on the streets. In Jenduba on January 12, there were 12,000 people demonstrating in a city of 30,000 inhabitants.

The local branches of the UGTT have become the centre of gravity of the resistance against the dictatorship. Mass meetings are held there, and the offices are used to organise many activities. This is no accident. It can only be explained by the specific weight this union has in the collective political memory of the Tunisian workers. The union played a decisive role in the anti-colonial struggle against the French occupation. Now it has become   despite the role of its leaders   the cornerstone of the resistance built up in the last few weeks.

In the last days this movement reached the suburbs of the capital, prompting the regime to impose a curfew. Military vehicles and soldiers were posted at strategic points around Tunis. Even tourist destinations such as Hammamet could not escape the sweep of the movement. Under terrible pressure from its ranks the UGTT leaders called for a 2-hour general strike in the country for today, Friday 14th January.

Realising that repression alone could not stave off the movement, the President General, Ben Ali, announced on three occasions this week promises of reform and concessions. Napoleon Bonaparte a long time ago understood that you can do a lot of things with bayonets except sit on them.

The divisions within the regime are now opening up more and more. The head of the Army is said to have been sacked by Ben Ali for his refusal to shoot on the demonstrators. Anecdotes often reveal the real situation in the army, like the one of the young army officer on the streets of Sidi Bouzid saluting the angry funeral march of one of the demonstrators that were killed.

The most important “concessions” were announced yesterday evening when Ben Ali declared he would lift the censorship on the media, introduce more freedoms, investigate the killings of protesters during demonstrations, ask the police not to shoot on demonstrators with live ammunition and that he would not seek re-election as president of Tunisia in… 2014.

This is a typical example of “everything changes so that nothing changes”. Yesterday evening’s stage managed demonstrations of supposed jubilant Ben Ali supporters in the centre of the capital were aimed at confusing the Tunisian people and the international media. But an awakened people cannot be fooled easily. Too many promises have been made in the past and too many have been broken.

The movement has also evolved from a localised social protests into a nationwide political movement confronting the mighty force of the state. The concessions now are “too little too late”. No one trusts Ben Ali and his clique any longer, no-one, that is, among the masses. There are still a few who trust this hated man. The main so-called opposition parties, including the former communist party, on hearing the concessions being made, have reacted with cautious optimism and called on Ben Ali to form a coalition government. But from the masses Ben Ali is getting a completely different response, not the kind of reaction he expected to the concessions he announced yesterday evening. 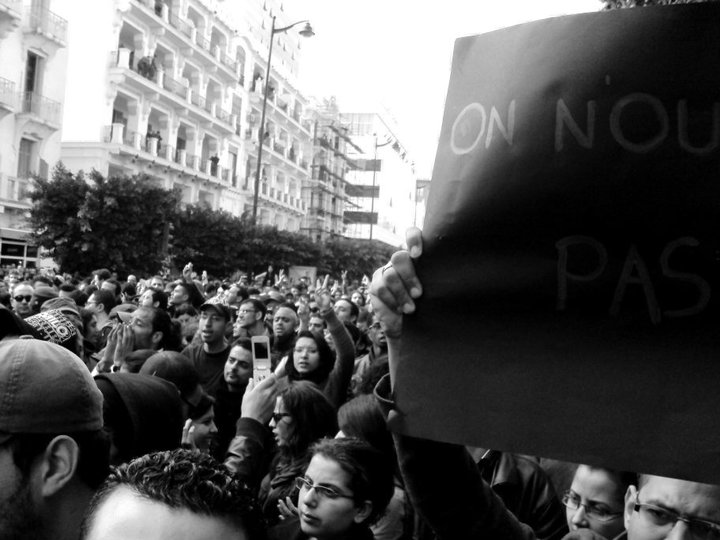 Protest outside ministry of interior 14 January. Photo: nawaat.org The Tunisian street, educated by years of oppression, lies and treachery by the representatives of the regime has replied with its feet. This morning the masses poured onto the streets all over Tunisia. More importantly in the capital, tens of thousands have gathered in front of the once feared buildings of the Ministry of Interior. A demonstration in front of the “Minister of Terror” would have been unimaginable even 24 hours ago.One slogan unites the demonstration: Ben Ali out! Not tomorrow, not in 2014 but now! Others say “we prefer to live on dry bread and water than to continue to live with Ben Ali”.

Scenes of fraternisation between the army and the demonstrators have been shown on French television and broadcast around the world. The police who were out on the streets this morning did not dare to intervene. Later on in the day fresh police forces were sent in who tried to disperse the demonstrators with tear gas and baton charges, but to no avail.

Other demonstrators decided to go the Presidential Palace in Carthage to stage a sit-in. Prominent figures within the regime are abandoning the boat, like rats jumping from a sinking ship. The regime is losing its grip on whole sections of its state apparatus. Some reports indicate that sections of the army have come out in defence of the demonstrators. Journalists of the Tunisian state television are reported to have revolted today, as they took over the TV studios and decided to start reporting the truth of what has been going on in the country.

These are all signs of the death agony of the regime. Nobody can doubt any longer that a revolution is going on in Tunisia. This is the moment of truth in Tunisia. Friday 14th of January 2011 will be remembered as an historic day. It will be remembered as the day when the whole of the Tunisian people rose up against its dictator. Again it has been proven that it is the masses that make history.

Yesterday a blogger summarised very well the feeling of many Tunisians:

“Ben Ali has proposed we should work ‘hand in hand’ to build an illusory future, but his hands are covered in blood! We cannot tolerate that he should goes in complete impunity.

“Having sacrificed our compatriots for some reduction of the price of bread, for opening access to Youtube and the illusion of democracy in 2014 would be unforgivable while freedom is within our grasp, in the grasp of the people that is capable of bringing a regime to its knees.

“Yesterday I saw a stressed and terrorised president… a president trembling, stammering, sometimes shouting and out of control. His speech was a confession of weakness, a cry for help. The man of ‘Bikolli hazm’ is on his knees. Let’s finish him.”

The regime is manoeuvring in order to save its very skin, making all kinds of last minute desperate concessions. Ben Ali has dismissed his entire government in an attempt to save his own position. The legal reformist parties of the “opposition” are preparing to lend him a hand. Most likely they will try to form a government of national unity with some of Ben Ali’s ministers together with representatives of so-called “civil society” and legal opposition figures. Most probably, however, Ben Ali will have to go. Such a government would be very unstable and govern with the shadow of the awakened masses on its back. This is how they will try to rob the masses of their victory.

The masses should have no illusion in any of these politicians. The struggle must be waged until the very end. The masses have learned in the space of a mere four weeks that they can only count on their own strength. Instead of conceding power to a government of national unity, the UGTT and all the other rank and file groups of youth, peasants, neighbourhood activists, should set up democratically elected committees at local, regional and national level. These could then form the democratic and political backbone of a new government with the aim of the eradication of poverty, unemployment, corruption and abuse. Within the confines of capitalism and imperialist domination, however, these aims are impossible to attain. Real democracy means also that the wealth, the economy, is owned collectively and run democratically. This is what socialism means. 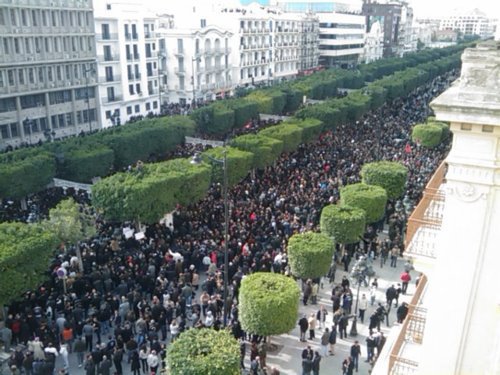 The Tunisian people, its youth and its workers, are writing history now, this very minute. They have become the symbol of the struggle against oppression and exploitation in the whole of the Arab world. They are showing to the whole world the real face of the Arab working class, a class that is prepared to struggle to the very end. In this struggle we do not see Islamic fundamentalism coming to the fore, but the working class and its organisations. The Tunisian workers are showing the way to their Algerian and Moroccan brothers and sisters and to the peoples of the whole of North Africa and the Middle East and beyond.

There is not a stable regime in the whole of the Arab world. The same conditions that have ignited the movement in Tunisia exist in Jordan, Syria, Saudi Arabia, Egypt... The same conditions will lead to similar developments. What we are witnessing is the unfolding of the Arab revolution, which will eventually spread from one country to another. The conditions exist for an international struggle that can only lead to one conclusion: the need for an all-Arab Socialist Federation.

Gallery of pictures from 10 January (nawaat.org)

Gallery of pictures from 14 January (nawaat.org)