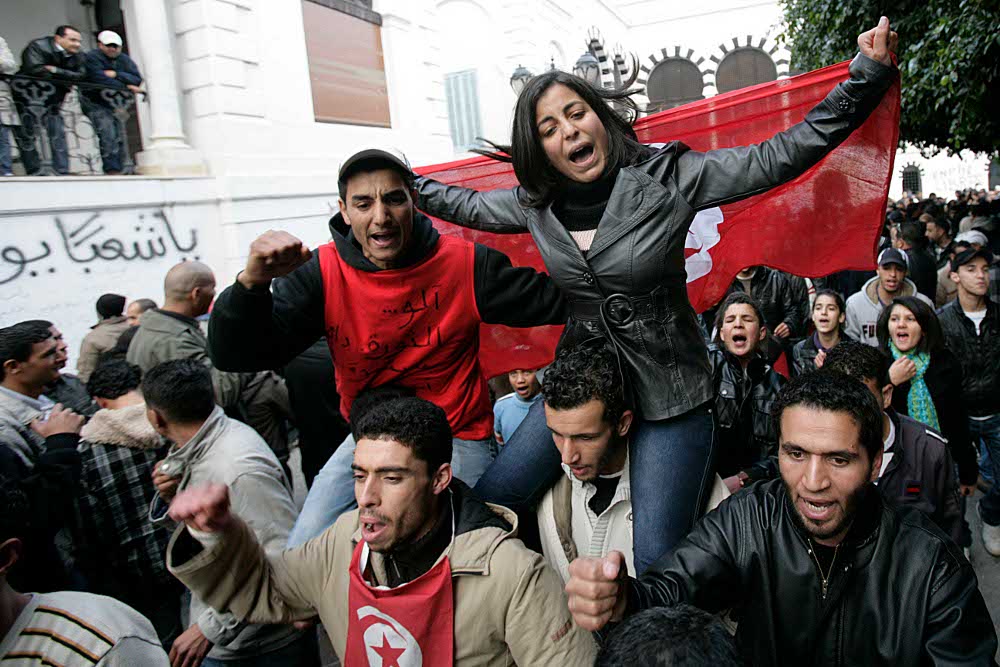 On Monday, March 7, Tunisia’s new prime minister Béji Caïd el Sebsi announced the composition of his government, the third since the overthrow of Ben Ali by the revolutionary uprising of the people on January 14. Essebi himself only came to power on February 27, after the resignation of Mohamed Ghannouchi, who had been Ben Ali’s prime minister and continued in the same role after his overthrow.

Gannouchi’s resignation came as a result of the pressure of mass demonstrations throughout the country which culminated in huge rallies in Tunis on February 25, 26 and 27, the largest since the fall of the Ben Ali (see The second wave of the Tunisian revolution: down with Gannouchi – all power to the revolutionary people). When demonstrators attempted to enter the building of the hated Ministry of the Interior they were met with brutal repression on the part of the police leading to at least five protesters being killed and hundreds arrested.

The resignation of Ghannouchi was followed by the resignation of a number of his ministers, including representatives of Ben Ali’s legal opposition parties Ahmed Ibrahim (from Ettajdid, the former Communist Party) and Ahmed Néjib Chebbi (from the PDP), who had been providing the national unity government with a left cover. These parties are widely despised by the masses that see them as having collaborated with Ben Ali until the last minute only to then join a “unity” government dominated by Ben Ali’s ministers. Under pressure from the masses other ministers also resigned, including most of those in charge of the economic portfolios, businessman Elyes Jouini, Ben Ali’s minister for privatization Mohamed Nouri Jouini, and Mohamed Afif Chelbi who had also been involved in Ben Ali’s economic policy.

There is an open struggle in Tunisia between the revolutionary masses, who are pushing forward, and the ruling class which is trying to contain the movement within the safe limits of bourgeois democracy. So far, the balance of forces remains favourable to the masses, who have been forcing concession after concession. First it was the removal of all ministers from the old ruling party from Ghannouchi’s government. Then it was the dissolution of the RCD itself. The masses also threw out the regional governors appointed by the government. The workers expelled managers linked to the old regime from companies and government institutions. Finally, the revolutionary workers and youth brought down Ghannouchi himself and many of his ministers.

The bringing in of el Sebsi is a ploy to put a more acceptable figure at the head of the attempt to restore bourgeois normality and put an end to the revolutionary fervour of the masses. El Sebsi, a lawyer, was a minister under Bourguiba and is presented as having had little to do with the Ben Ali regime.

In the current conditions in Tunisia, he can only rule by appearing to be making concessions to the masses. His first announcement after informing of the composition of his government was that of the dissolution of the hated political police and the directorate of state security, the two bodies most responsible for repression under the old regime. At the same time, he announced that instead of presidential elections, as originally planned, there would be elections to a Constituent Assembly on July 24. Mr. Caid el Sebsi asserted that all those responsible for crimes under the old regime would be brought to justice, starting with Ben Ali himself, who had committed the crime of “high treason,” not to mention all the key figures of the old system. He added that he “understood” the feelings of those youth who had organized the sit-in at the Kasbah.

At the same time, he is treading carefully, insisting his is also a “government of continuity”, and, in fact, the crucial defence, interior, justice and foreign-affairs ministers remain in their posts. He insisted that what was needed was to “re-establish security, which is the key to solve all of our other problems”, since, he said, “without security there will be no development”. The main priority of his government, he said, would be “work conditions, productivity, efficiency and the continuity of the state”. In other words, he wants the restoration of normal capitalist order in the field of the economy, putting an end to the “nuisance” of constant strikes, wildcat walk-outs, workers demanding the resignation of managers, etc., and also the restoration of the normal capitalist order within the state, putting an end to these constant sit-ins, demonstrations, demands, the rule of revolutionary committees and trade unions, etc.

If one looks more closely at the composition of this “technocratic” government, we can see clearly whose interests it represents: those of the capitalist class and imperialism. The government is full of ministers who have received training in French universities and have worked in international institutions (the OECD, the World Bank, etc). Abdelhamid Triki, Minister of planning and international cooperation, was part of Ben Ali’s economic team (as secretary of state for international cooperation and foreign investment), and was also an alternate director at the World Bank.

No wonder that the employers’ organization UTICA welcomed the new government: “we have the feeling that Tunisia will go back to a normal life and the measures taken reassure this feeling,” said Hammadi Ben Sedrine, the bosses’ boss.

It is clear that the concessions wrested by the revolutionary masses are important, and there is a certain feeling of having won yet another battle. The Constituent Assembly was one of the key demands of the masses and for them it represented a clean break with the old system. However, those who are now calling for it are the representatives of the ruling class. None of them played any role in the revolution but they are now attempting to claim a legitimacy which they do not have.

The war is far from over. The youth who sparked off this movement, the workers who mobilized massively to overthrow the old regime, were fighting for bread, jobs and dignity. For them democracy does not only mean the right to form political parties, the right to say what you want without fear, the right to vote every so often, but also, and above all, the right to have a job, a decent wage, to be able to buy food.

As we have explained in previous articles, the balance of forces in Tunisia is extremely favourable for the workers. However, one thing is lacking: a revolutionary leadership able to provide a way out. Amongst the organizations of the left in Tunisia there seems to be a disease of issuing statements but not taking any concrete measures to implement them. The newly formed Council for the Protection of the Revolution, which includes revolutionary organizations, but also others, including the Islamist party Ennahda which played no role in the revolution, is awaiting legal recognition from the government.

What these organisations should have done is to call and organise a national assembly of delegates from the revolutionary committees (which still exist in towns, cities and neighbourhoods throughout the country), which would be the only body with legitimacy to speak in the name of the revolution.

The road to bourgeois normality which the ruling class is pursuing, however, will be a difficult one. On the one hand, it cannot guarantee the demands of the people. On the other, there is in Tunisia a people which has awoken to political life, has achieved a whole series of victories through mass mobilization and direct action, and feels confidence in its own strength.

The key question is that it requires a revolutionary leadership armed with a clear programme of socialist transformation, the only one that can fulfil the aspirations of the masses for a better life.