The first round of the Tunisian presidential elections on 15 September, described as an “electoral insurrection,” was a heavy blow against all the parties that have in one way or another ruled the country since the revolutionary overthrow of Ben Ali in 2011. Nearly nine years later, none of the social and economic problems that sparked the revolution have been addressed. This was expressed through increased abstention (turnout was only 45 percent, 18 points lower than in 2014) and two “outsiders” going on to the second round, despite one of them being jailed for tax evasion during the campaign.

The results were a damning indictment of both the “secular” and “Islamist” bourgeois parties, which have jointly managed the country since 2011.

The election was called because of the death of the president, the 92-year-old Béji Caïd Essebsi. He was a man of the old regime who, after the revolution, played a key role in making sure that nothing fundamental would change. Essebsi founded his own party, Nidaa Tounes, as a vehicle for recycling politicians of the old regime into the new, democratic Tunisia, and won the 2014 presidential election, defeating the bourgeois-liberal Marzouki. This 88-year-old politician, who represented all that was hated about the old regime, was a graphic expression of the way the revolution had been hijacked and its aims betrayed.

Though final and complete results have not yet been announced, it is clear and official that the reactionary, populist, constitutional law expert, Kaïs Saïed (who stood as an independent and received 18.4 percent of the vote); and jailed TV magnate, Nabil Karoui (who stood for his own Heart of Tunisia party and received 14.48 percent) will both go to the second round. 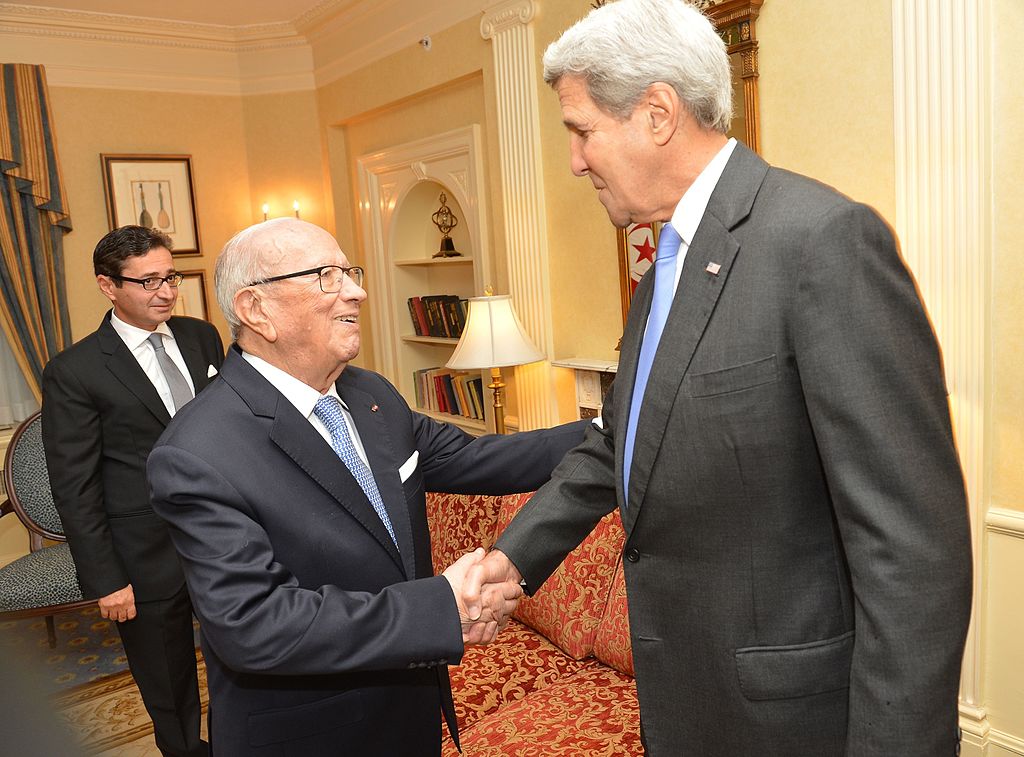 The election was called after the death of the 92-year-old president Béji Caïd Essebsi / Image: Department of State

Voters say: get out!

In what some observers have described as a wave of “degagisme” (from dégage – “get out” – the slogan the 2011 revolution directed at Ben Ali and his regime), all the candidates of the establishment parties were trounced. The candidate of the bourgeois-Islamist Ennahda, Adbelfattah Mourou, standing for the first time in the presidential election, received a paltry 12.8 percent. The candidate of the deceased president Essebsi, Abdelkrim Zbidi, got only 10 percent of the vote. The current prime minister, Youssef Chahed, standing as the candidate of his own party, Tahya Tounes (a split off from Nidaa Tounes), got an even-worse result, with only 7.3 percent of the vote.

One front-runner, Kaïs Saïed, is a reactionary constitutional law professor who captured some of the vote of the Islamist Ennahda party and demagogically calls for devolution of powers to local councils / Image: public domain

The elections reflected a deep-seated discontent with the “democratic transition” in Tunisia, which has not resolved any of the social and economic problems that led to the 2010-11 revolution. Namely, unemployment, the high cost of living, poverty in the regions of the interior, lack of opportunities for the youth, etc. The economy is stagnant. At 7.5 percent, inflation is at its highest level for nearly 30 years. Unemployment remains at 15 percent overall, though it reaches 30 percent in some of the poorer regions, with youth unemployment at 34 percent. More than a third of the country’s unemployed have university degrees, something that played a key role in the revolutionary uprising in 2011.

Since the overthrow of Ben Ali (who died yesterday in the protection of the reactionary Kingdom of Saudi Arabia), there has been wave after wave of protests, strikes and local insurrections, the most recent one in 2018. There is widespread opposition to the government’s policies, particularly its package of cuts and “structural reforms” agreed with the IMF as a loan condition. The country’s debt-to-GDP ratio, which was 43 percent in 2011, has shot up to over 70 percent now, with debt servicing skyrocketing and eating up a large part of the government budget.

These economic and social conditions have led to the growing discrediting of all established political parties – be they “secular”, “Islamist” or representing old regime – which have ruled together as part of a national unity government. This is the explanation both for the record level of abstention, as well as the victory of candidates who are seen as “outsiders”. 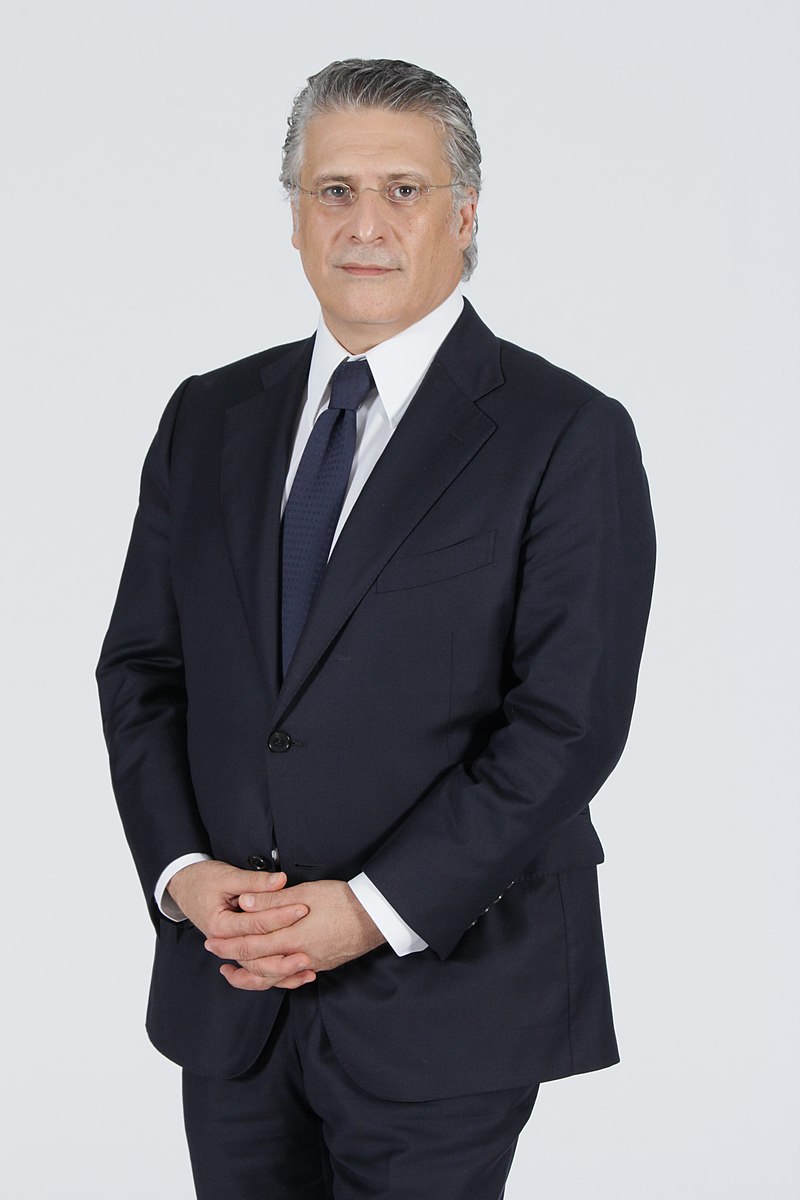 Nabil Karoui is the wealthy owner of TV station Nessma, is currently jailed for tax evasion, and has presented himself as the "anti-establishment outsider", though he is anything but / Image: Mohamed Riadh

But who are Kaïs Saïed and Nabil Karoui? Saïed is a constitutional law professor who has captured some of the vote of the Islamist Ennahda party by opposing gender equality in inheritance, the decriminalisation of homosexuality and the abolition of the death penalty. However the main appeal of his campaign, in which has made frequent references to the “martyrs of the revolution,”' has been his proposal for a complete overhaul of the political system. He wants to devolve all power to local councils and for representatives to these to be directly elected and recallable at any time. He wants the national parliament to be elected by these local councils and for representatives to it to be recallable as well. The fact that such a proposal has garnered support is an indication of the extent to which political institutions have become discredited, despite having been established so recently. The problem, of course, is that no amount of tinkering with the political system will solve the economic and social problems in Tunisian society, as long as the economy remains in the hands of a few wealthy families and multinational corporations.

Nabil Karoui has presented himself as an outsider: he is anything but. He has been compared to Berlusconi. He is the wealthy owner of TV station Nessma, which he founded in 2007 with the agreement of Ben Ali. He was then a promoter and close associate of Nidaa Tounes, the party through which figures of the old regime became “democrats”. He played a key role in delivering Essebsi’s election victory in 2014 through his TV station and communications company. However, in 2017, he fell out with Essebsi’s son and party leader Hafedh Caid, and left the party.

He used his wealth skilfully to promote his image through a charity foundation, which allowed him to build a network of patronage and support in the country’s poorer regions. It was through this network that he created his own party earlier this year to run in the presidential election. His image as an anti-establishment figure was created by the establishment itself, which used all possible tricks to try to prevent him from standing and to disrupt his ability to campaign. First, they attempted to pass an amendment to the electoral law banning anyone running charitable foundations from running as a presidential candidate. Then, in July this year, a 2016 report questioning the transparency of his charity was dug out to accuse him of money laundering. His assets were frozen and he was banned from travelling abroad. Then, on 23 August, in the middle of the presidential campaign, he was arrested on charges of money laundering and tax evasion.

Surely, he is a crook, but these moves were seen as a transparent attempt by the prime minister and the powers-that-be to prevent him from winning the election, thus giving him the aura of a victim of the system.

Socialist revolution the only way forward

It is not clear who will win the second round of the presidential election, which will probably coincide with the legislative elections which are also due. What is clear is that neither of these candidates will solve the problems and the frustration that led a significant section of the electorate to abstain and another to punish the establishment politicians. 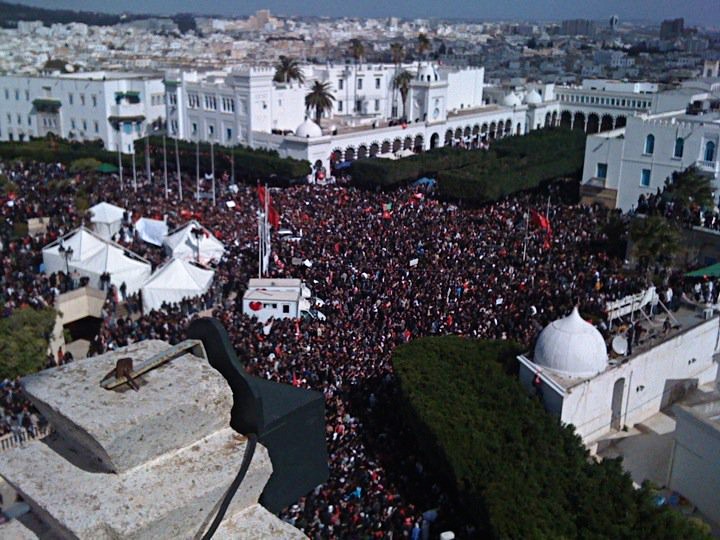 Tunisia needs a second, socialist revolution, one that should complete the task of the heroic movement in 2010-11 / Image: public domain

The left did very badly in this election. The veteran Hamma Hammami of the Workers’ Party got only 0.69 percent: a complete collapse from 7.8 percent in the 2014 election, when he stood as the joint candidate of the left-wing Popular Front. The truth of the matter is that the revolutionary left wasted several opportunities in the first stages of the revolution in 2011. At a time when the question was posed of transferring power to the workers and the poor, they dithered, tail-ended the “secular” parties and allowed the ruling class to regain the initiative. Instead of raising the basic questions of jobs, poverty and who controls the economy, they concentrated the debate on secularism vs Islam. Instead of raising the question of socialism and the expropriation of the capitalists and multinationals, they concentrated on fighting for “democracy” in the abstract, as if there could be any “better” kind of democracy under capitalism. Through their own mistakes, they became irrelevant to the revolutionary youth and the workers. Now they have paid the price in the elections.

The experience of the Tunisian revolution should serve a salutary lesson for the ongoing revolutionary movement in Algeria. “Democracy” – within the limits of capitalism in a country dominated by imperialism and a few local capitalist families – cannot solve any of the problems of the masses. Even a constituent assembly called by the regime, as was the case in Tunisia, will not improve anything. What is needed is a complete overthrow, not only of the old, despotic regime, but also the capitalist system by which it is sustained.

Tunisia needs a second revolution, one that should complete the task of the heroic movement in 2010-11, in which so many gave their lives. That revolution can only be a socialist revolution, one that would be an inspiration to the masses across the North of Africa and the Arab world. For that, it is necessary to build a Marxist tendency, based on a clear balance sheet of the experience of the last nine years. The economic and social conditions in the country will lead to new explosions. The key question now is to patiently build a revolutionary leadership that can take them to victory.