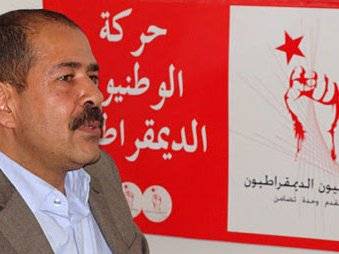 On the morning of February 6th, the prominent left wing leader Chokri Belaïd was assassinated in front of his house in Tunis. Thousands have taken to the streets, attacked offices of the ruling Ennahda party, which they consider responsible for the assassination, and a general strike has been called for tomorrow, February 8th. This could be the incident that sparks a much needed second revolution, two years after the overthrow the hated Ben Alí regime.

Chokri Belaïd was the general secretary of the Unified Party of Patriotic Democrats (PUPD), which describes itself as Marxist and Pan-Arabist, as well as being one of the leading figures of the Popular Front, a coalition of left wing forces including the Workers Party (PT, formerly the PCOT). Belaïd’s family and comrades lay the blame for his assassination on the so-called “Leagues for the Protection of the Revolution”, gangs of fascist thugs linked to the ruling Islamist party Ennahda. Hamma Hammami, the spokesperson of the Popular Front and main leader of the PT declared: “the government as a whole is responsible for this political crime”. The current government is a coalition between the Islamist Ennahda, the Congress for the Republic (CPR) and the social democratic Ettakol.

On Saturday, February 2nd, a regional congress of the PUPD was attacked by Salafist gangs leaving 11 people injured. At that meeting Chokri Belaïd denounced Ennahda as being responsible for the attack, which was the latest in a constant and growing campaign of intimidation and violence carried out by Islamic extremists.

As news spread of his assassination, thousands immediately gathered in protest demonstrations, both in the capital Tunis and in cities and towns across the country including Gafsa, Sidi Bouzid, Béja, Kasserine, Bizerte, Mahdia, Sousse, Siliana and Mezzouna. In many of these places the demonstrators ransacked and torched the offices of the ruling Ennahda party. Thousands gathered in the Habib Bourgiba Avenue in the capital and outside the Ministry of the Interior. Once again, the shouts of “the people want the overthrow of the regime”, which were the rallying cry of the Tunisian revolution against Ben Alí, were heard again.

Incredibly, despite the official condemnation of the killing by the government and Ennahda, the state used riot police and tear gas against the demonstrators and against the procession which accompanied the ambulance transporting the body of Belaïd.

Some of the demonstrations on the day and on Thursday have acquired insurrectionary proportions. In Sidi Bouzid youth clashed with the police throughout the night and attacked the police barracks, finally forcing them to withdraw, to be replaced by the Army on the streets. In Jendouba, a march organised by the regional UGTT trade union on Thursday 7, occupied the building of the regional governorate and demanded that the governor should leave the region. Similarly in Gafsa, paralysed by a general strike, demonstrators have clashed with the police while attempting to occupy the governorate building. There was also a general strike in Siliana, which had already seen a popular uprising in November 2012. In Kelibia (Nabeul), the offices of Ennahda were assaulted and the government delegate expelled. In El Kef, which was the scene of a regional strike two weeks ago, there were huge demonstrations yesterday and today and the offices of Ennahda were attacked and the people declared all government representatives persona non grata in the region. Media reports pointed out that police forces were completely absent and that militants of the Popular Front had organised stewarding to guarantee public security.

Clearly, even before the assassination of Belaïd, there had been a build up of discontent and anger which had been accumulating for months. The current unstable coalition government has never had mass popular support. At the time of the Constituent Assembly elections in October 2011, with a turnout of just 50% of those registered to vote, Ennahda, the main coalition partner got barely 37% of the votes and its coalition partners got even less; CPR 8.7% and Ettakol 7%.

The lack of legitimacy of the tripartite government was shown by the fact that the wave of strikes and regional uprisings which was unleashed by the overthrow of the Ben Alí government on January 14, 2011, continued unabated, though with ups and downs.

The basic reason for this is that the social and economic conditions of the masses have not changed in any significant way. If anything, the situation has worsened after the overthrow of the regime. In the past, the Tunisian economy was heavily reliant on foreign investment, attracted by cheap labour and a stable political situation (ie. a ruthless dictatorial regime guaranteeing the suppression of social protests), tourism and the migration to Europe as an escape valve. With the onset of the capitalist crisis in Europe, these three avenues have dried up. Dozens of European companies have closed their factories in Tunisia, as there is no longer social “peace”, but also because Europe no longer provides a hungry market for their products. Tourism has also collapsed for similar reasons, with a 30% drop in the number of tourists in 2011.

We have to remember that it was mainly the social and economic conditions which led to the revolutionary uprising which ended by overthrowing Ben Alí. Endemic rates of youth unemployment of over 35% and thousands of unemployed graduates with no future were amongst the main reasons for the movement. None of that has changed. Unemployment is around 17 to 18% overall (up from 13% before the revolution) and 40% for youth.

The uprising in Siliana, where a general strike demanding jobs and economic progress in November led to clashes with the police, with the burning down of the Ennahda offices and over 300 people injured, marked the beginning of a new wave of protests. At the beginning of December, Salafist thugs (which act with the acquiescence of the national government) attacked the offices of the UGTT in the capital on the day the trade union was commemorating the anniversary of the assassination of its founder. The attacked provoked an angry reaction which forced the union leaders to call a national general strike for December 13. Even before that day the regions which played a key role during the revolution against Ben Alí came out on strike on December 6: Gafsa, Sidi Bouzid, Sfax and Kasserine.

The December 13 general strike was seen by all as a political strike, the only aim of which could be the overthrow of the government. Enormous pressure was brought to bear on the UGTT leaders which finally, at the last minute, decided to call it off. The decision was taken with only a very narrow majority and there was widespread discontent amongst the ranks.

In any case, the calling off of the strike did not solve anything. Regional strikes and movements continued, as well as a wave of strikes in different sectors involving customs officers, secondary teachers, university lecturers, social security officers, hospitals etc. December 2012 ended with a regional strike in Jendouba and January 2013 started with a very radical general strike in El Kef, with tens of thousands participating in the demonstrations and establishing road blockades throughout the region. In a sign of the desperation facing many of the unemployed, some of those involved in a sit-in to demand jobs went on a hunger strike and decided to sew up their lips.

This enormous pressure from below led to a crisis in the ruling coalition and all sorts of attempts to enlarge its scope, that is, to make more parties responsible for its economic policies. Throughout January there were calls for some sort of “national dialogue” commission to be set up, the main aim of which would be to rope the leaders of the UGTT trade union into some sort of deal to put an end to the wave of strikes and demands by the workers. Meanwhile the government has been in negotiations with the IMF for a 1.8 billion dollar loan. The conditions attached to such a loan are, in themselves, a recipe for a social explosion, demanding further deregulation of the labour market, cut backs in subsidies to basic products, a reduction in the number of civil servants.

Under enormous pressure from below, the UGTT leadership today has decided to call a general strike for tomorrow, Friday, to coincide with the funeral of Chokri Belaïd. At the same time, the Prime Minister, Hamadi Jebali decided to sack the government and call for the appointment of a new “technocratic government”. This has been rejected by Ennahda (the party he belongs to). The manoeuvres and dealings from above reflect the difficulty the Tunisian ruling class has in finding a government with enough legitimacy to carry out the anti-working class policies which are needed from their point of view. This is a reflection of the strength of the workers movement.

The 2010/11 revolution in Tunisia was not completed. Ben Ali was overthrown, but his regime and the capitalist system he defended still remain. At the time of the revolution there was no clear alternative offered by any of the revolutionary organisations which could have taken the movement further beyond the limits of bourgeois democracy and towards genuine social transformation. In those conditions, the whole movement was contained and derailed along bourgeois democratic lines.

The new revolution that is being prepared, demands that the lessons from the shortcomings of the previous one are studied and learnt. The only way to solve the pressing problems of the Tunisian masses of workers and the poor is through the expropriation of the handful of capitalist families and multinational groups which control the country’s economy, so that the resources of the country (material and human) can be put under a democratic plan of production to start addressing the needs of the masses.

What needs to be stated clearly is that as long as the capitalist system, based on the private property of the means of production, is left untouched then, none of the problems of poverty, unemployment and oppression faced by millions of Tunisians can be solved. These are precisely the lessons of the last two years.

Tens of thousands of workers and youth have already experienced the joys of capitalist “democracy” in Tunisia. They are ready and willing to fight for genuine liberation. What is needed is a revolutionary leadership armed with a program which can lead them to victory. A similar process is taking place in other Arab countries, particularly in Egypt. A new revolutionary upsurge in Tunisia will have an even greater impact across the Arab world than the overthrow of Ben Ali two years ago.