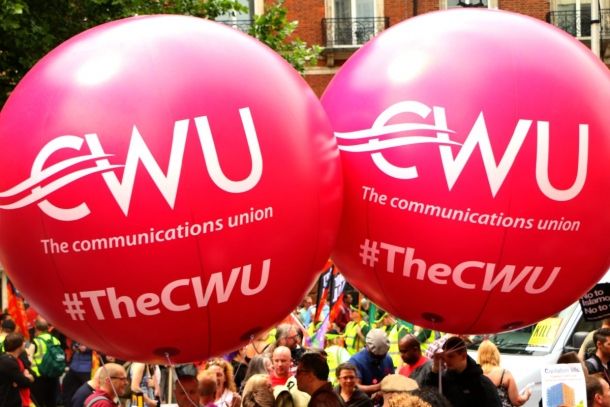 The Labour4Clause4 campaign in Britain received a massive boost at the annual conference of the Communication Workers Union (CWU) in Bournemouth on 28 April, when a composite resolution supporting the restoration of the original Clause 4 to the Labour Party Constitution was passed unanimously.

The composite motion (see below) was supported by five CWU branches, and was moved by Des Heemskerk from the Essex Amal branch, who was proudly wearing a Clause 4 campaign t-shirt as he spoke to the conference.

Des concluded by saying, "the CWU needs to be at the forefront of the campaign to restore Clause 4, restoring our socialist principles and opposing the Blairite free market."

The motion was seconded by John Humphries of the London Postal Engineering branch. John demanded more public investment and an end to austerity. The Tories defend their principles the death, John asserted, and we need to defend our principles with the same determination.

In another contribution to the discussion, brother Amarjit Singh of the South East Wales Amal branch passionately stressed that: "Enough is enough! Big business is ripping us off. Privatisation is creaming off the wealth for the bosses and nothing for us."

Phil Waker of London 7 branch stated that public ownership is not simply good for one section of workers, but for all workers. "We don't need lords and ladies running our nationalised industries, but the workers themselves, " he emphasised.

Maria Exall of the London combined branch stated that "power and wealth are in the hands of the few not the many." Maria argued for Labour to take telecoms into public ownership, alongside Royal Mail. A Labour Party committed to public ownership will be extremely popular, Maria noted – but we need democratic control. "We need to replace this dog eat dog society with a society based on need not profit," Maria asserted in finishing.

The debate was concluded by Katie Dunning of the West London Postal branch. Katie made an impassioned plea for congress to pass the motion.

"We were told that privatisation was as natural as Darwinism under Thatcher's property-owning democracy. We were told that class did not exist, as they sold off the water, gas, electric, railways, and even the Queen's head," Katie explained. "Big business has profited off the backs of working people, with their big bonuses and packages."

Katie highlighted that big business were expressing their fears about nationalisation in the pages of the Financial Times. "Big business are co-ordinating their attack," Katie stressed. "We should do the same!"

The CWU National Executive Committee (NEC) backed the motion, with CWU general secretary Dave Ward speaking on behalf of the NEC to pledge support for the call to bring back Clause 4.

"These debates are not pipe dreaming," stated Dave. "What is happening is unacceptable." People can see what is going on, where inequality is growing. The only way forward is a political one.

"We are paying for the price of Thatcherism. Between 1980 and 2916, 40% of all the money made from privatisation in the OECD was made in Britain. We led the way for the experiment. They were allowed to continue this with the neo-liberals in the Labour Party. Mandelson was telling us that Royal Mail was a basket case. But within three years, £1 billion in Royal Mail went into the pockets of the shareholders."

Dave attacked the old Royal Mail management, which ripped workers and customers off. These people conned us for years. "We are not going back to that," he said. "We have got to start by changing the governance and how the industry is run."

When the composite motion was put to the vote, there was not a single vote against. This augurs well for the campaign to restore Clause 4. The CWU is affiliated to the Labour Party, and a motion to bring back the original Clause 4 will be on the agenda of this year's Labour conference in September.

We call on delegates from CLPs and all trade unions to back this motion and help to restore Clause 4 – Labour's historic socialist pledge.

The Labour Party was created to put an end to this dog-eat-dog society. Its aim was “common ownership”, and for a society based on need not profit.

This was written into Labour’s Constitution as Clause Four, guaranteeing “to secure for the workers, by hand or by brain, the full fruits of their industry.”

This was abolished by Tony Blair in 1995, instead committing the Party to “enterprise of the market” and the “rigour of competition”, which justified previous Tory privatisation and set future Labour government policy.

Conference notes at the last Labour Conference, John McDonnell, the shadow chancellor, stated that the “common ownership” principles of the original Clause Four “are as relevant today as they were back then”.

Conference therefore instructs the NEC to support campaigns and initiatives by like–minded organisations that promote the renationalisation of our previous public companies and seek to restore the principles of Clause Four as part of the aims of the Labour Party.

The NEC should also consider submitting a proposition to Labour Party and TUC conference to support these aims and objectives. The execution of the policy contained within this motion should not in any way undermined or diminish the role of trade unions.