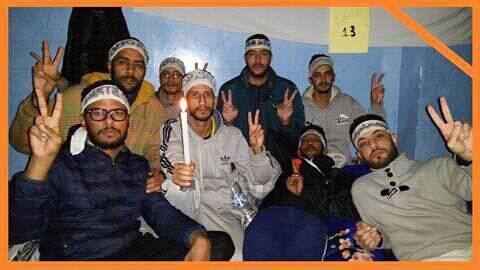 In the last few months, the Group of Unemployed Saharawis, which consists of many masters degree holders, university graduates and technicians, organized several peaceful demonstrations in the main streets of Laayoune, Western Sahara, demanding their right to employment. This modest demand has been met by the most monstrous oppression at the hands of the Moroccan police. After the authorities refused to open channels of dialogue with the protesters, the Group found no other resort but to go on a hunger strike.

Sick and tired of the brutal and atrocious ways used by Moroccan police to break their peaceful demonstrations and protests, nineteen of them—The Field Coordination of Unemployed Saharawis, most of whom are masters degree holders—chose the headquarters of The Association of The Defense of Human Rights (Laayoune branch) as the battlefield for their struggle.

Since the outset of this civilized protest, The Moroccan authorities have dealt with this with an inapprehensible degree negligence and procrastination. On the other hand, the strikers have gained popularity and the sympathy of most of the Saharawi Community.

This region contains plenty of natural resources which are being exploited on a daily basis by the Moroccan government and other wealthy businessmen, while the majority of Saharawis continue to live in misery and suffer from poverty and unemployment.

“The battle of Empty Intestines—as it is commonly known amongst the population of Laayoune—will definitely lead to our victory because we rather die of hunger than live humiliated,” shouted a striker.

Moroccan Police ready to violently break up the peaceful protest organized by the comrades and families of the hungerstrikers - 24 January 2016The families of the strikers have denounced the local authorities for stopping them from visiting their sons and for preventing the strikers from communicating with the press, some human rights associations and some trade unions. Families and the comrades of the strikers have organized numerous peaceful demonstrations in support of this struggle but they too have only encountered oppression and violence.

[For more information about the struggle of the Saharwis read this article: Western Sahara: The uprising in El Aayiún – our position]

The strikers are holding strong in their demand for decent jobs and will not capitulate until they get what they are fighting for. The growing anger of Saharawis—especially the working class—is boiling and threatens to bring about a return to the riots and sit-ins that rocked the region in 2011.