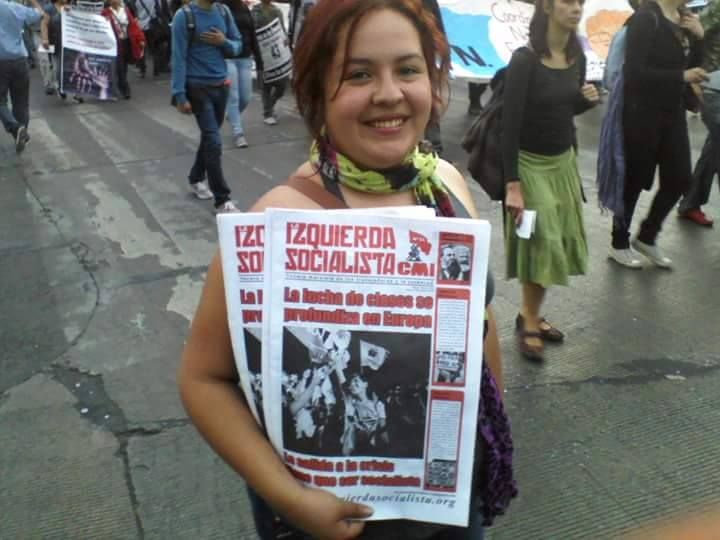 This is a call to all national and international organizations, to the workers and the youth of the world, to send the following resolution to the Mexican authorities in solidarity with comrade Stephanie Arriaga (Fanny) and her family, who are currently victims of extortion and death threats. Comrade Fanny is an outstanding fighter for the rights of students and workers at the Instituto Politécnico Nacional (National Polytechnic Institute) and is an activist in the Mexican section of the International Marxist Tendency.

The Mexican authorities are ignoring all complaints made by the family. In addition, organized crime keeps watching over Fanny’s house, intimidating her and her family; they have even threatened their neighbours with firearms. We fear for the security of our comrade, her family and her neighbours. We don’t want any more cases of activists being victims of violence or killings, in particular the targeting of women, which has been a feature of the situation in Mexico. We don’t want any more cases of omission and complicity between the state and organized crime.

To the mayor of Mexico City, Miguel Ángel Mancera

To the head of the Gustavo A. Madero borough, Víctor Hugo Lobo

The undersigned are deeply concerned about the situation of violence in Mexico. 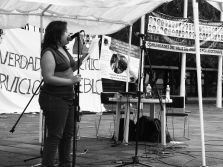 According to some statistics, there are 27 thousand people who have been disappeared in this country, including cases such as that of the 43 missing teacher students of Ayotzinapa and the case of the five disappeared youth from Tierra Blanca, Veracruz. Homicide figures are even more worrying. In the three years of the government of Enrique Peña Nieto 54,000 new cases have been reported. Among them, the cases of Julio Cesar Mondragón, a teacher student from Ayotzinapa ; Rubén Espinosa, a photo journalist who was assassinated on July 31st 2015 in Mexico City along with Nadia Vera, Yesica Quiróz and Mile Virginia Martín who, in addition, were raped and tortured ; and Anabel Flores, a journalist assassinated in February of this year. The murdering and raping of women, kidnappings, and extortions are daily occurrences in an environment that has become intolerable, especially for poor families in Mexico.

It is also worrying that the corrupt Mexican state does not act to protect victims of violence but instead, protects organized crime and is even involved in attacks against the Mexican population, journalists and social activists. The case of Ayotzinapa showed the world this undeniable reality.

So far, Mexico City has experienced less levels of violence than other parts of Mexico. This is partly due to the fact that there is a more critical and conscious population, that in years of struggle, has fought for social progress. This is even manifested in the government of the capital. But the actions of the administration worry us and leave us with serious doubts about whether they are acting in the best interests of the working population of Mexico City.

We are particularly alarmed by the case of comrade Stephanie Arriaga Casillas and her family, residents of Mexico City and victims of extortion and death threats. On February 16th 2016, around 7:30 pm, six armed men arrived in a grey car with tinted windows that did not have a plate number. They entered her house in the Gustavo A. Madero borough. They spoke with her uncle, who runs a food stand in the house, and asked him for 100 million pesos (aprox. US$5,600) "of rent" (extortion money). This is an enormous amount for a working class family. Comrade Stephanie is a professor with precarious working conditions. The armed men said they knew about Stephanie, her brother and her uncle’s sisters, including their names and specific details. This is obviously a threat to their security and lives. The criminals said it was useless to contact the police, for they were collaborating with them. They left a cellphone with her uncle and told him they would call with instructions.

A complaint was raised to the Attorney General’s Office in Mexico City [Inquiry Number FAS//T1/00139/16-02], where the bureaucracy underestimated the case and no real measures have been taken to address it. There has been no request to access the video recording of the police, the process has been protracted and no police cars have been dispatched to surveil the house. They even gave the criminals back the cell phone that they had given the uncle to extort money from him! For this reason, a complaint was raised to the Comisión de Derechos Humanos del Distrito Federal (Human Rights Commission) with file number 1260-16.

Stephanie Arriaga Casillas, also known as Fanny, is an outstanding activist. She studied in the Escuela Superior de Economía (Economics Faculty) and is now in the process of completing her major at the National Polytechnic Institute (IPN). She has been taking part in the movement #YoSoy132, she was spokesperson for her school in the Polytechnic Student Assembly during the mass strike of 2014 and defended their list of demands in a public dialogue broadcasted on TV in front of the IPN authorities. Fanny is a member of the Committee of Student Struggle at the IPN and of the International Marxist Tendency in Mexico.

We fear for the life and security of comrade Stephanie and her family. We don’t want another case of violence and murder against women, of extortion or kidnapping of a social activist or their family. We hold the governments of Mexico City and of the Gustavo A. Madero borough - lead by Miguel Ángel Mancera and Víctor Hugo Lobo respectively - responsible for the security of comrade Fanny. We hope that the government of Mexico city, a city that has seen many important advances, is not corrupted in coalition with organized crime and that it takes action on this matter. Finally, to reiterate: we will denounce, nationally and internationally, any aggression against Fanny and her family. Therefore, the undersigned demand that:

Source: Urgent call for solidarity against death threats to comrade Fanny Arriaga and her family, member of the Socialist Left in Mexico