On October 25 the left-wing Frente Amplio (FA) came close to winning outright in the first round of the elections with 48.16% of the votes cast. On November 29 the country goes back to vote in the second round. The workers have rallied round the FA, but far more would be possible if the FA leaders were to turn decisively in favour of the workers. 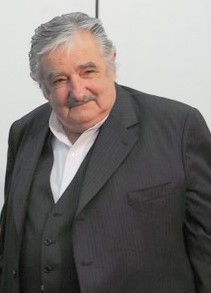 José "Pepe" Mujica, Frente Amplio candidate. Photo by Roosewelt Pinheiro/ABr. The Broad Front left coalition (Frente Amplio, FA) with "Pepe" Mujica as their presidential candidate, won 48.16% of the votes cast on Sunday, October 25. The electoral system is designed in such a way that a second ballot is required, since no list got a straightforward majority of 50% plus 1 required to avoid such election. All this in spite of the fact that the FA got more votes than the two traditional parties combined (45.84%: 28.94 for the National Party, and 16.9% for the Colorado Party.)

Only an electoral system that was designed to keep the traditional parties alive can force a political party that won half of the valid votes cast (not counting blank and void ballots), and with a 20% lead over the second place finisher, to have to go through a new election. This system, designed to prevent a victory of the left, works as a kind of primary election between the National and Colorado parties. The Colorado (red) party will decide this week [end of October] whether to support the National (white) candidate, Lacalle, even though their candidate, Bordaberry, has already declared his vote for the conservatives. But this plan of the bosses' parties will fail again, as it did in 2004, when the Uruguayan workers defeated the right-wing coalition, and put the left in government for the first time in history.

Although the FA obtained the same percentage of the vote as back in 2004, it should be pointed out that the lukewarm attitude of the government headed by Tabare Vazquez worked against a mobilisation of the people and growth of support in these elections. It was only in the last week in the run-up to the elections, with a mass rally to close the campaign, and with some important legal decisions to deal with (the supreme court judgement had repealed the statute of limitation, Ley de Caducidad, for the crimes of the dictatorship in the case of torture and assassination of a young woman and the 25 year sentence handed out to dictator Gregorio Alvarez for 37 murders) that the government managed to whip up some enthusiasm. What is required is to extend such measures to all fields of government, especially to the economic and social, with a substantial improvement in the quality of life of the masses to avoid a major electoral defeat in future elections.

We should also point out, however, that FA's vote this time round was worse than in 2004 and this shows there is no great enthusiasm on the part of the Uruguayan working class for the policies of the Tabare government: some small concessions to the workers and at the same time major measures in favour of big business and the multinationals. The workers closed ranks around the FA to block the road to the right wing, but also sent a signal to the new government (to be headed by Mujica-Astori) making it clear that they won't give it a blank cheque.

The National party, even though it has continued to decline in electoral terms, is the main beneficiary of this undemocratic electoral system, and is presenting itself as the pro-capitalist option in the “second round”. Its proposals are based on spending cuts (their campaign symbol is a chainsaw) and a tough approach against crime.

The Colorado Party recovered a small part of what they've lost in the last few years, going from 10-12% to 16.9% based on a certain generational turnover. The party achieved this to the detriment of the National party, although the latter's taking part in the second round forces the "reds" again to submit to the "whites" in their contest to represent big business and the oligarchy.

The Independent Party remains stuck at 2.47%. Popular Assembly (Asamblea Popular), the only leftist grouping of those that broke with the FA able to get more than the 500 votes required in the primaries, failed to keep any MPs, with only 0.65% of the vote. As we anticipated in our previous issue, "ultra-leftism" has failed again, even managing to lose those seats they previously held.

In the referendums, neither of the government's two proposals won a majority of 50% plus one. The proposal to repeal the Statute of Limitation - a law which makes legal action against the dictatorship's actions - won 47.36% of the vote. This can partially be explained by the appeasement provoked by the Supreme Court ruling mentioned above, which might have made people believe that the Statute had been totally repealed. The proposal that Uruguayans living abroad should be able vote by mail (the so-called postal vote) obtained 36.93% of the vote. The numerous exiles and emigrants still have to travel home to exercise their right to vote. The campaign on both these questions was poorly conducted. It took a back seat to the presidential campaign and the issues were not sufficiently explained.

Who will govern in the period 2010-2015 will be decided between the left candidature of Mujica-Astori and that of the right-wing Lacalle-Larranaga on November 29. Given how close the FA came to outright victory in the first round of voting, only unforeseen circumstances could deny it a second term. One of the dangers is the pressure from the right exerted on the candidates of the FA. They are already trying to appear moderate, and close to president Vazquez. Only a decisive deepening of the process of social changes that has been initiated could strengthen the workers' and popular movement, and awaken the necessary enthusiasm for an overwhelming victory over the parties of big business.

Facing with these vacillations, concessions, and turns to the right on the part of the leaders of the Broad Front, the task of the trade union, social and political activists remains that of building a revolutionary socialist current to fight within the FA to put Uruguay definitely on the path of the Latin-American revolution.

Read this article in Spanish.