United States
Share
Tweet
Jobs in the USA continue to hemorrhage with no end in sight. Companies keep announcing layoffs as the official unemployment rate reaches a 16-year high of 7.2 percent and is expected to reach 10 percent or higher over the next 12 months. The number of Americans continuing to claim unemployment is now at 4.78 million, the highest level since records began in 1967. Workers are beginning to think.

The official unemployment rate is at a 16-year high of 7.2 percent and is expected to reach 10 percent or higher over the next 12 months. The number of Americans continuing to claim unemployment is now at 4.78 million, the highest level since records began in 1967. 11 million U.S. workers are now officially counted as unemployed, a 48 percent jump from a year ago, even before this latest wave of cuts. Some two million jobs are expected to be lost in the coming year, even if Obama's $819 billion economic stimulus plan manages to create or even merely hold off the termination of hundreds of thousands of jobs.

Todd Wilson, an Overland Park, Kansas computer salesman put it this way: "Anybody who is looking for a job now is feeling an economic tsunami. It feels like all of a sudden, it has just fallen apart." According to Heidi Shierholz, an economist at the Economic Policy Institute, there are four unemployed workers competing for every available job. "There are literally millions of workers unemployed with no hope of finding a new job. The queue is just too long." And according to Mid-America Regional Council chief economist Frank Lenk, for every corporate job lost, an average of two others will be lost. 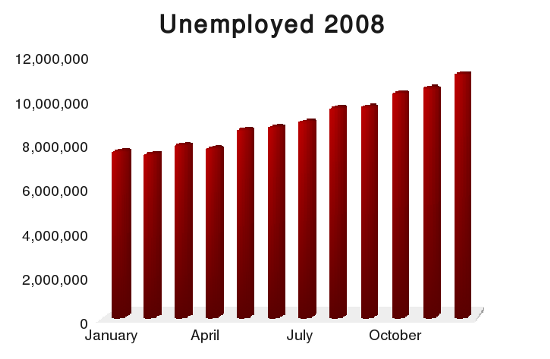 But 68,000 isn't just a number. These are individual workers with families, friends, homes, dreams and hopes for the future. With job openings vanishing, mortgage payments looming, savings evaporating, and credit cards maxed out, the future looks increasingly bleak for millions of American workers. The harsh realities of life under capitalism – the crushing of the "American Dream" beneath an avalanche of debt – has led many to despair. Quite literally in many cases, capitalism kills.

While some have gone so far as to burn their own homes to the ground in order to avoid defaulting on mortgage payments, others have taken even more drastic action. On Tuesday, January 27, one day after "Bloody Monday," the country was shocked – but not altogether surprised – to hear that yet another mass killing had taken place as a result of desperation over the economy. A California man killed his wife, his five young children, and himself, after both he and his wife lost their hospital jobs. According to reports, the couple jointly planned the killings as an "escape" for the family, as they saw no other way out. According to the suicide note: "Why leave our children in someone else's hands?"

Of course, not everyone who is laid off goes off the deep end. But who can deny that the pressures of this system drove these "normal" American parents to the edge? And what about 93-year old Marvin Schur from Michigan, who froze to death in his own home after the power company restricted his use of electricity because of unpaid bills? According to the county medical examiner, the World War Two veteran died "a slow, painful death."

This is the real face of capitalism. It therefore comes as no surprise that anger and disgust at the bankers, CEOs and the rich in general is rising. On the same day the 68,000 job losses were announced, it was reported that Citigroup, a major recipient of bailout cash, was going forward with the purchase of a $45 million private jet for its CEOs. Corporate excess has always ruffled the class instincts of working people, but $45 million in public money for a private jet when millions of workers are losing their jobs is going "over the line." 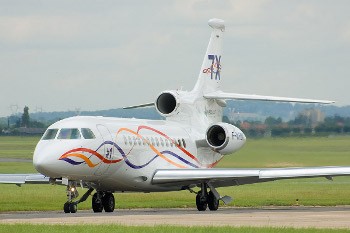 Citigroup are going ahead with their planned purchase of a $45 million private jet.

Incredibly, nine out of 10 senior executives at banks receiving public bailout money are still on the job. In other words, those who captained this latest crisis of capitalism are still at the helm. For example, JPMorgan Chase, which received billions in taxpayer dollars, is still headed by CEO James Dimon, who made about $28 million in 2007 and stands to make many millions more. Meanwhile, the company is laying off at least 10 percent of its workforce.

Unemployment in the banking industry has nearly tripled as some 100,000 bank employees have lost their jobs over the last two years. According to Rebecca Trevino of Louisville, Kentucky, a mother of three recently fired from her job as a training coordinator at Bank of America: "The same people at the top are still there, the same people who made the decisions causing a lot of our financial crisis. But that's what tends to happen in leadership. The people at the top, there's always some other place to lay blame. It is surprising that leadership can make decisions that lead to financial ruin for so many, and then get bailed out for it."

With no public oversight whatsoever on the bailout money, it is simply assumed that the CEOs will make "better choices" this time around. But as Jamie Court, president of the California-based group Consumer Watchdog put it: "When you deal with the same dogs, you're going to end up with the same fleas."

Often, anecdotes tell more about the underlying processes in society than endless lists of facts and figures. The following is a case in point, an example of the conclusions being reached by many workers on the basis of their own experience. While traveling through Chicago's O'Hare airport on "Bloody Monday," I went to the service desk at my departure gate to confirm my arrival time. Three airline workers, one working the desk and two crew members waiting to get on the plane before boarding, saw the news on CNN that 68,000 workers had lost their jobs in a single day. The looks on their faces were of concern and disbelief; they were clearly thinking about their own job security. Then the service desk worker said, "It's a shame, when all they really need to do is lay off five people." The others looked puzzled. "Yeah, just five people: the CEOs of United Airlines, American Airlines, Delta Airlines, etc. and the problem would be solved!" The others chuckled, and one added, "Make that 10 people – the heads of the banks too!" After more laughter, the third added: "Let them all get on their Learjets and fly off to wherever, never to return!"

These are the snippets of conversation one hears across the country as millions of workers engage in a molecular process of discussion and analysis of the crisis and its causes, reaching out to one another for ideas and support. Here are a few more: "Every day it's more bad news and more people unemployed." "I thought my job was safe, but now I'm starting to worry. The axe could come down at any moment." "We need to confiscate the property of the rich." "They built too many stores during the boom and now everyone's getting laid off."

U.S. workers are beginning to "connect the dots." They instinctively understand that it is just a handful of people at the top who make the decisions that affect the rest of us. Just a few months ago, these kinds of discussions were simply not taking place on such a wide scale: on the bus, in the grocery store checkout line, at the Post Office, during the football game, at church, and at the bar, around the dinner table. This is just the beginning of the beginning of a profound shift in how U.S. workers – yes, the same workers who in the past voted for GW Bush and supported the Iraq War – understand and relate to the society they live in. The revolutionary implications for the future are clear.