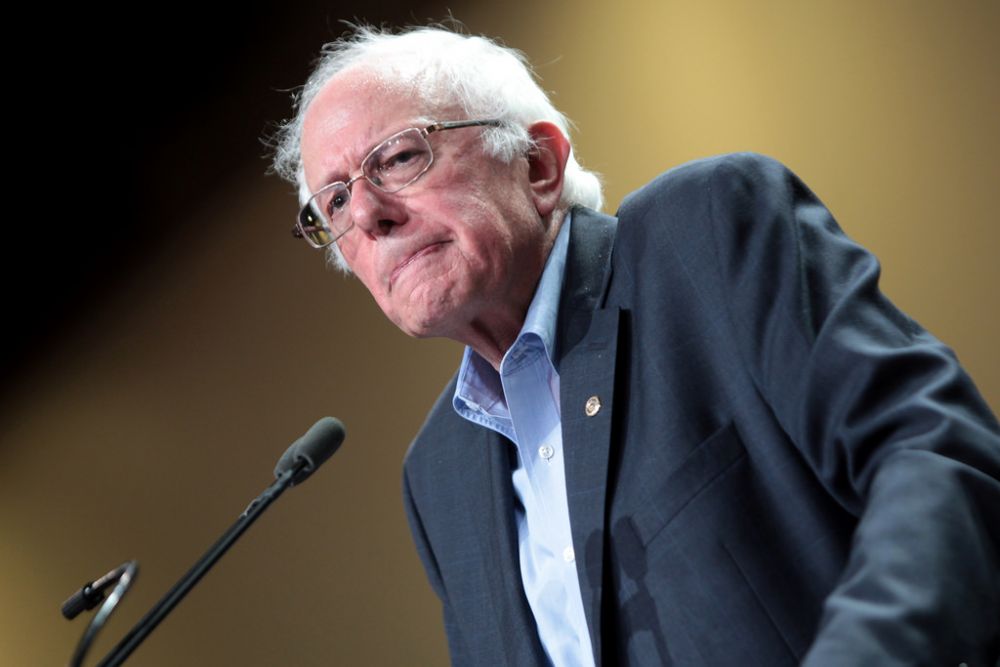 The 2020 presidential election has started. The fact that the Democrats won forty additional seats in the House of Representatives in the midterm elections has many of them smelling Republican blood. A number of candidates, including Elizabeth Warren, Amy Klobuchar, Kamala Harris, and Corey Booker, have already launched their campaigns. Now Bernie Sanders has become the 10th official candidate—with many more yet to come—to announce his run for the Democratic Party’s nomination.

What exactly does this mean? It means that Sanders is running in the Democratic Party, one of the two major big business political parties, to be their candidate for president. Almost without exception, all Democratic Party candidates who do not win the nomination support the official nominee in the final presidential contest. That is the way the system works. This is what Sanders did in 2016. Now, he has again decided not to try to provide an independent class outlet for millions of workers in 2020. Instead, he has chosen to try to channel their aspirations into the Democratic Party. We strongly disagree with this approach.

In the last presidential election cycle, Bernie shook up American politics as he took on Hillary Clinton for the Democratic Party nomination. He campaigned for a “political revolution against the billionaire class” and called for universal healthcare, public works projects, free higher education, paid parental leave, and a higher minimum wage. Everywhere he spoke, not just in places like New York City and Boston, but in Houston and Phoenix, he drew huge crowds. Bernie raised over $240 million, mostly in the form of small donations from thousands of people and won over 13 million votes in the primaries and caucuses.

Unsurprisingly, the Democratic Party establishment used their rigged rules to defeat Sanders, including the so-called “superdelegates,” which made Clinton’s nomination all but inevitable. Bernie went to the Democratic National Convention with momentum and he could have used the momentum to break from the party—a party that he is not technically a member of—and set up an independent socialist campaign. This could have laid the foundation for a mass working-class socialist party. Sanders may well have beaten both Trump and Clinton in November 2016. Instead, he supported Clinton and “lesser-evil” politics, Trump was elected, and no alternative was built. 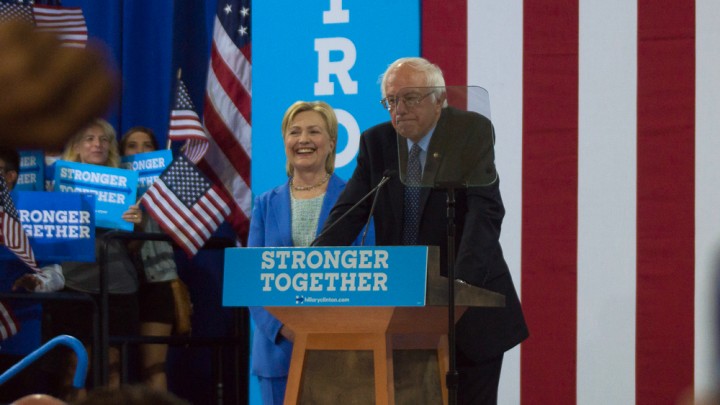 At the 2016 DNC, Bernie could have used his momentum to break from the party and set up an independent socialist campaign. Instead, he supported Clinton and “lesser-evil” politics / Image: Flickr, Marc Nozell

Why do workers need a party of our own?

The working class is the overwhelming majority of the population and its class interests are opposed to those of the superrich when it comes to both domestic and foreign policy. It is a historical necessity that the working class form its own party. This has been delayed by the policies of the trade union leaders, who mostly support the Democrats. It has also been delayed by those on the left who have supported the Democrats and continue to justify this strategy.

Bernie’s 2016 campaign was a distorted expression of the need for such a party while at the same time blocking its actual formation. Workers supported him for his more-radical-than-the-status-quo policies, despite running as a Democrat, not because of it. But his whole strategy led to a dead end rather than the clean break that is needed. And while he tacked to the “left” of the traditional big business politicians, he did not run on a socialist program and did not challenge the capitalists’ right to rule. Had he done so, he would not have been allowed to run as a Democrat. Nancy Pelosi has said the Democrats are “capitalist,” and she is 100 percent right about that. Once upon a time, Bernie was opposed to the Democrats. But working in the comfortable surroundings of Washington, DC with his “Democratic colleagues” has apparently changed his views. Either that, or he simply has no confidence in the working class’s ability to stand politically on its own.

Lessons from Corbyn in Britain

There are many differences between US and British politics, but events in both countries do influence each other. One big difference is that in the late 1800s, the British labour unions stopped supporting the Liberal Party—roughly the equivalent of the Democrats—and started the Labour Party. Labour grew and became the main opposition to the Tories, while the Liberals became a minor party.

The Labour Party has a powerful right wing, led in the past by Tony Blair. Blair wanted to turn Labour into a party like the Democrats, but he was not successful. Then, in an accident that expressed historical necessity, the hubris of the Blairites opened the path for Jeremy Corbyn to run for party leader, and he channelled the enthusiasm of millions into his candidacy. Unbeknownst to the careerist Blairites, there was a large constituency that wanted a Labour Party with radical policies. With Corbyn as leader, Labour grew and gained seats in the last general election. There is now a battle for control of the Labour Party and some on the right wing have already abandoned ship. More will likely split off towards the so-called centre if Corbyn comes to power. The battle in Britain was to retake the Labour Party from the pro-capitalist wing that was trying to destroy it. Enthused by the prospect of a party with radical policies coming to power, membership has skyrocketed and Labour is now the largest party in Europe. 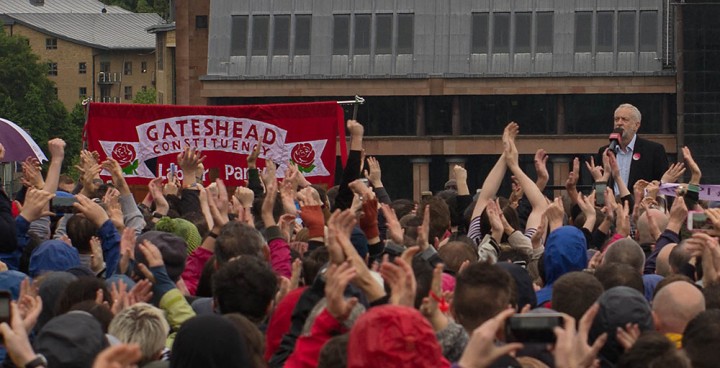 The battle in Britain was to retake the Labour Party from the pro-capitalist wing, but in the US we need to build our own party from scratch / Image: Flickr, Jenny Goodfellow

Here in the US, we have to start from the other side, so to speak. We are not trying to retake “our party,” but build our own from scratch. There is a large constituency that wants a mass working-class party, free from the control of big business. If Bernie were serious about taking on the power of the billionaires, he could use the enthusiasm around his campaign to create something new—a party of, by, and for the workers. A poll in October 2018 found that 72 percent of independents and 54 percent of Democrats want a new party. Could there be a better time to start one?

A socialist running independently for president would fight both the Republicans and Democrats and put forward a program to take the wealth out of the hands of the richest two percent and to set up a democratically planned economy. Such a candidate would call on the union rank and file to form committees to force their leaders to break from the Democrats and Republicans and support the new party. By fighting for guaranteed quality jobs, high wages, and union protections for all, not to mention universal healthcare, education, and housing, millions would join and contribute to this effort.

The fact that Bernie Sanders is again running as a Democrat on a mildly reformist program—plus the lamentable role of the trade union leaders—will delay the perspective for a working-class party, but it cannot prevent it forever.

Because Sanders is not running on a socialist program, other “populist” Democratic Party candidates like Elizabeth Warren may campaign to his left on some issues and could win some of his supporters. Although Warren has made it clear that she defends capitalism, she has come out in favour of the government manufacturing some drugs to make them cheaper for working people, for daycare facilities funded by taxes on the rich, and for a wealth tax on those who are “worth” $50 million or more. While these proposals seem radical when compared to usual Democratic Party fare, taxing the wealthy will not fundamentally transform the system.

The rich will always find a way to shelter their money, or the taxes will be found “unconstitutional.” The socialist way forward is to nationalise the top 500 companies and to use this wealth for the good of society as a whole.

Nonetheless, Marxists recognise that in the vacuum of today’s political arena, many people will support the Sanders campaign. When Bernie announced on February 19 that he would run, he raised $5.9 million and pledges of support from 400,000 people within the first 24 hours. 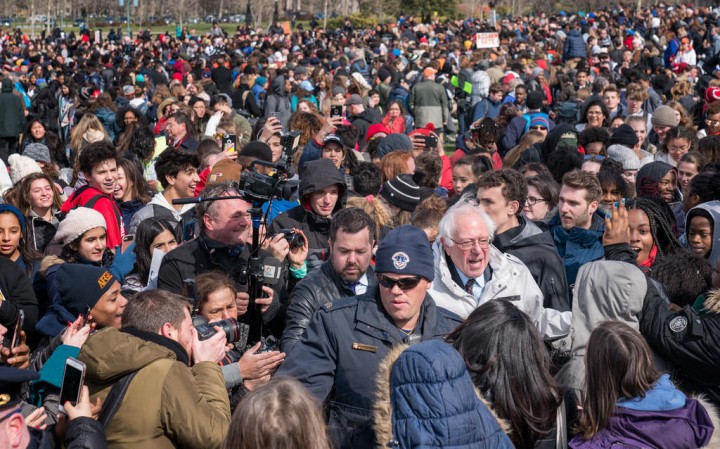 Marxists recognise that in the vacuum of today’s political arena, many people will support the Sanders campaign / Image: Flickr, Lorie Shaull

Marxists will engage in a friendly debate with Bernie’s supporters and attend their meetings and rallies. There is much we want to discuss with them. For example: What are socialist policies and how can they solve the problems facing workers today? How can we take the next steps to move in that direction? Is this possible within the confines of a capitalist party? We will also patiently explain that even if Bernie does win the Democratic Party nomination, it would not mean that he has captured the Democratic Party, but rather, that they have captured him. We will also warn against the “bait-and-switch” that will be used to draw Bernie supporters into supporting whichever Democrat wins, if it is not Bernie, under the “lesser evil” pressure to elect “anyone but Trump.”

If Sanders does win the presidency, his modest program would be watered down, stalled, and sabotaged. American and world capitalism are in decline and cannot provide a better life for the majority. This is also true for the Scandinavian countries that Bernie admires so much. They are cutting back on the reforms of the past, and the standard of living is going down while insecurity is on the rise. This is the reason the anti-immigrant right is raising its ugly head in those countries today and gaining some support. Some people will have to learn by going through this experience, but others have already broken with the Democrats on the basis of the 2016 election.

America will be socialist!

In his recent State of the Union address, Trump stated that America will never be a socialist country. This should be counted among the countless other lies Trump spews on a daily basis. Ironically, in the past, socialists and the left have been seen as a negligible force in the US. Now the president feels compelled to openly attack socialism. This is just one measure of the growing appeal of socialist ideas.

Trump was forced to reopen the government during the shutdown because air traffic controllers shut down four important airports. This shows the concentrated power of the working class! Trump and the bosses can be beaten at the workplace and in elections, but for this the working class needs its own party. It will take mass forces to build such a party, but at some point, this will emerge. We might not be able to build a mass party immediately, but we can patiently lay the foundations for the future revolutionary leadership of this party by studying Marxist theory and working-class history. The Marxists will augment our forces as we go through the experience with those in and around the Sanders campaign—both those who have already broken with the Democrats and those who have not—as well as other political events in the coming period. We will prove Trump wrong! The crisis of capitalism leaves no alternative.