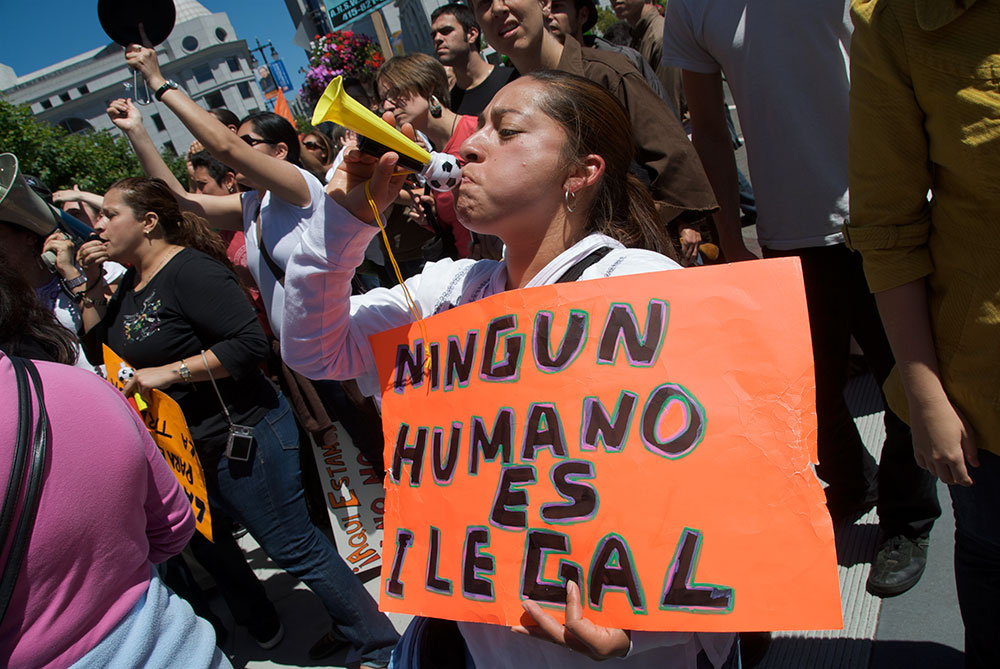 In the Spring of 2006, millions of immigrant workers flooded the streets of the United States to say “enough is enough!” The spark was an ultra-reactionary “immigration reform” bill sponsored by Wisconsin Republican Jim Sensenbrenner. But the frustration had built up for decades, as dangerous working conditions, low wages, discrimination, and the constant fear of raids and deportations reached the breaking point. The boundless energy and determination to fight overflowed the “safe” limits of the traditional immigrant rights and non-profit charities.

These organizations had no perspective of mass struggle, much less any confidence that the masses themselves could take their destinies into their own hands. For decades, they had contented themselves with providing legal aid, food banks, and a condescending pat on the head. The millions who walked off the job for the May 1st “day without an immigrant” “general strike,” wanted nothing less than amnesty and genuine equality. Those who participated in that marvelous movement can only compare it to the early days of a revolution.

But tragically, as with so many other spontaneous explosions of the class struggle, this inspiring mass movement of the most downtrodden layer of the working class lacked the necessary leadership. Instead of generalizing the struggle, linking it up with the labor movement and the broader working class, and transforming it into an offensive against the attacks of the bosses and their government, the movement was derailed into the courts, legislatures, and the Democratic Party.

A golden opportunity was missed. Long before the housing and economic crisis hit, and the attacks and austerity became generalized, and long before Wisconsin and Occupy, immigrant workers showed the way forward. Had the necessary leadership been in place, the situation facing workers in the U.S. today would be entirely different.

In the end, “immigration reform” was never passed, although G.W. Bush gave it a try. His proposal was more “moderate” than Sensenbrenner’s: an “enforcement first” approach that would militarize the border, expand guest worker programs, implement E-Verify employment authorization for all workers, impose fines and penalties, and offer “path to citizenship” for undocumented immigrants. Sound familiar? It should, because in essence, this is precisely what Democratic President Obama is proposing.

American capitalism requires immigrant labor. By keeping the wages of these workers low, they can drive down wages and conditions across the board, and have the further benefit of being able to scapegoat immigrants for “stealing jobs.” This divide-and-conquer strategy is nothing new. The capitalists have used racism and discrimination to perpetuate their system for centuries. What they fear most is a united working class conscious of the fact that through militant struggle, they can fight the bosses and win.

Obama’s proposed reform is a pro-capitalist reform aimed at facilitating the exploitation of these workers by big business. Even though raids and deportations have increased under Obama, the 11 million or more undocumented immigrants are essential to the U.S. economy. The “reform” merely seeks to recognize and codify the status quo.

Currently, millions of workers live “underground” and live their lives in the shadows and black market. By registering them, imposing fines, and collecting back taxes, they seek to exert more control over the whereabouts and activities of immigrant workers, and also bring more money into the treasury. So-called “guest worker” programs are to be massively expanded as well, especially in agriculture, which would cut across efforts to unionize this industry.

Guest workers are given temporary work visas, and can be deported at any time for any reason: including trying to form a union. Those undocumented workers who are offered a “path to citizenship” will likewise be in a kind of limbo for years, if not indefinitely.

None of the fundamental problems that led to the mass struggles of 2006 have been resolved. None of the contradictions in Latin America that lead millions to abandon their homes and families in search of work north of the border have been resolved. If anything, the pressure cooker is more explosive than ever.

If this reform is passed, it may in passing lead to a nominal increase in unionization. But this by no means excuses the spectacle of Richard Trumka and other leaders of the AFL-CIO lining up with the pro-capitalist Chamber of Commerce to back Obama’s proposal. Workers deserve better and should not settle for less! You cannot mix oil and water! You cannot reconcile the interests of the workers and the interests of the bosses! It is precisely these class-collaborationist policies of the labor leaders that have led U.S. workers to a blind alley.

The only solution is a policy of class independence. The unions need to break decisively with big business and their political parties. By basing ourselves on the power of the united working class, we can fight back against the bosses’ austerity and win. By building a mass party of labor to represent all workers, we can pass legislation that will benefit all workers. And by fighting for socialism, we can abolish the artificial borders that divide us and end the exploitative and racist capitalist system once and for all.

Leaflet produced by Socialist Appeal for use at immigrant rights meetings, events, and rallies. Click here to print copies and distribute widely. For the same leaflet in Spanish click here.