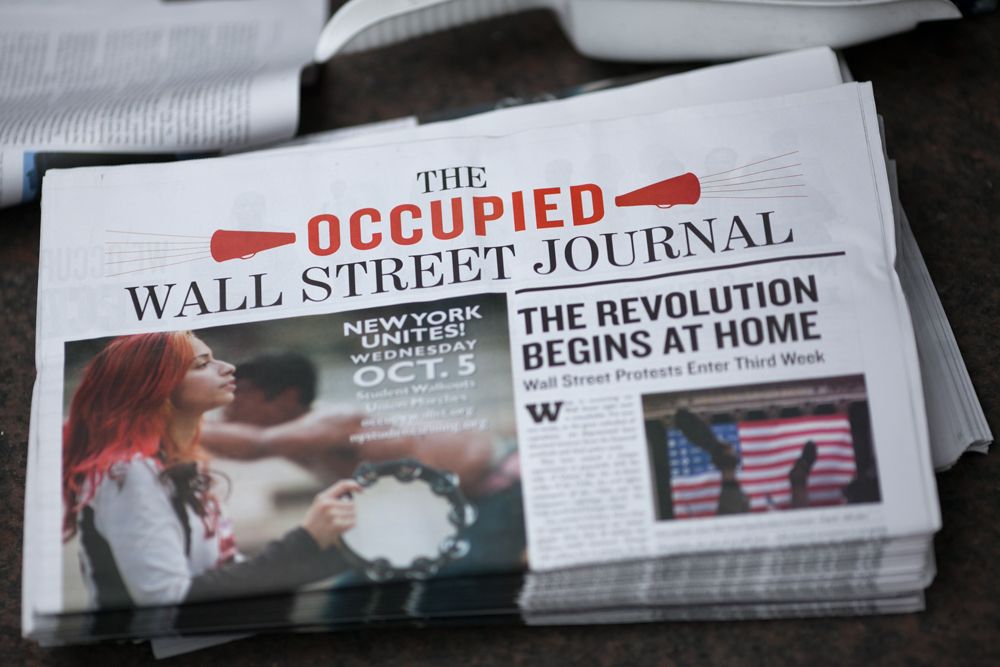 We all observed dramatic battles by organized labor in 2011. There were the broad militant struggles in Wisconsin by public workers responding to the vicious attacks from right-wing Republican Governor Walker. During the summer, CWA & IBEW members went on strike against Verizon. They battled against the demand for givebacks from the very profitable Verizon company. In Ohio, the labor movement mobilized its forces to repeal anti-labor laws by referendum and won a terrific victory, gaining 61% of the vote.

However, there is a continued feeling in the labor movement that it remains on the defensive. In the late 1940s, almost 40% of the labor force was unionized and that was mainly private sector workers. Now, less than 12% of the labor force is unionized and it is less than 7% in the private sector. Since the mid-1970s, beginning with the givebacks of the NYC municipal workers and the UAW in the auto industry, labor has been on the defensive.

The Occupy movement burst on the scene in 2011, influenced by the movements in North Africa and the Middle East. Even though it lacked a sophisticated analysis of society and it is a limited movement in terms of active participation, Occupy completely turned the tables on the capitalist politicians. It had a clear demand that the problems facing the population today are caused by the richest 1%. It centered its first occupation in the Wall Street area of NYC, the heart of U.S. finance capital. Very quickly, many workers and youth around the country began to sympathize with the movement.

The rank and file of the labor movement is extremely unhappy with the situation of giving up wages, benefits and working conditions, and watching their brothers and sisters being sent to the unemployment line. Given this situation: What can labor learn from the Occupy movement? Occupy has also found itself stuck and is looking for a way forward. How can the Occupy movement and labor work together to achieve their goals?

It should be noted that Occupy Wall Street would not have survived in NYC for as long as it did without the help of the labor movement. After the first few weeks of facing the pepper spray and nets of the police, the NYC teachers’ union known as the UFT or United Federation of Teachers (AFT Local 2), started storing equipment for the occupiers and allowed them space for their press outreach as well as restroom facilities. SEIU Local 1199, the giant healthcare union which counted Martin Luther King Jr. as one of its early supporters, provided the resources to print the Occupied Wall Street Journal in both English and Spanish. The help from 1199 meant the paper could be distributed free of charge!

A number of unions, including the two just mentioned, then organized a rally after the police arrested more than 700 people on the Brooklyn Bridge. It seems the unions were happy to see people protesting and fighting back against austerity. The UFT has been without a contract as Mayor “1%” Bloomberg tries not to give them the pattern wage increases that other city workers were granted a few years ago.

In addition, the first time that Mayor Bloomberg tried to “clean Zuccotti Park,” hundreds of union members, including construction workers from the World Trade Center site, who have been forced to give back some of their wages and benefits, showed up. Bloomberg called off the “cleaning.”

Yet another interesting development was the march organized by the NYC Central Labor Council in December against unemployment and the richest 1%. The NYC Central Labor Council does not have a tradition of organizing demonstrations, especially between Thanksgiving Day and Christmas. Interestingly, more than 5,000 workers marched in the cold and the dark from Herald Square to Union Square on December 1, 2011. It has been a long time since the NYC CLC has marched to Union Square.

The Occupy movement has now called for two “general strikes” on the West Coast. The first was a call for a general strike in Oakland after the police almost killed a demonstrator who happened to be an Iraq War veteran. Most of the labor movement did not oppose this, but did not organize genuine strike action either. The fact that many workers individually took the day off and that the later shifts at the Oakland waterfront were shut down as workers refused to cross the Occupy picket lines was proof that many workers support this movement. 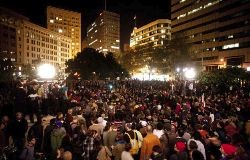 Occupy Oakland, 26 OctoberAfter this, the West Coast Occupy movement called a strike along the waterfront in support of longshore workers who were battling against an employer in Los Angeles known as Toll Group, and also against the grain terminal operator at Longview, Washington. This call for a strike was actually quite complicated.

Officially, the ILWU leadership disavowed the Occupy movement’s call for a strike. Some have speculated that the ILWU must do this or else it can face severe penalties due to the Taft-Hartley law. What is not clear is how many rank-and-file workers in the union agreed with the call for the strike or clearly understood the reasons behind it and what is was trying to achieve.

In general, there are many times when the pro-capitalist union leadership tries to fight contract or organizing battles by following the labor laws such as Taft-Hartley. In a period of capitalist decline, this strategy almost always leads to defeat. It is clear that workers must band together and democratically elect a leadership that can win these battles. That is why, when workers are entering a struggle, they should elect a strike committee at each workplace. These strike committees can get the union leadership to change their policies or can act as an alternative leadership which can help to change the leadership and turn the unions into fighting bodies.

In the case of the battles in Los Angeles and in Washington State, if those workers had elected strike committees, and if those bodies had appealed to the rest of the ILWU, the broader labor movement, and the Occupy movement for solidarity strikes, this would have strengthened the movement. However, it is unclear to what degree the rank-and-file workers supported Occupy’s call for a West Coast shutdown.

What is clear, is that if the labor movement is going to start winning battles against give-backs and really start to organize the unorganized, it needs to use its power and challenge the bosses’ labor laws. This is the way labor succeeded in the past. How this is achieved is the key question. In this, the Occupy movement is pushing the labor movement on how it should move forward.

The Occupy movement is correct to look to the labor movement. Ultimately, it is the working class which makes up the vast majority of the population. The working class has colossal power, as it alone manufactures and runs shipping and all forms of transport. Without workers, nothing would be produced or moved! The task is to raise the consciousness of the working class so that it understands the power it has.

It should be noted that in NYC and elsewhere, some of the Occupy movement is actually moving in the wrong direction by organizing small, self-contained “affinity” groups. These groups will tend to drift away from the masses; yet it is the mass of the population that can really bring about change.

Many movements in history have been defeated because the more militant and radical wing of the working class went too far ahead of the rest of the class. The more militant and radical elements must win over the more conservative and less-conscious section. It is through this, that the class as a whole can move forward. What can be seen clearly is that the militancy of the Occupy movement is having an effect and seems to be spreading to the labor movement. Hopefully, this will continue and become broader.

Looking ahead, the Occupy movement needs to expand its outreach out to workers and help them to organize in their unions to change the leaders’ policies so that labor can start to win some battles for a change. In addition to this, Occupy can also help fresh, unorganized workers join unions and strengthen the movement against the top 1%.