Nearly 50,000 members of the United Auto Workers (UAW) union have gone out on strike at GM factories, warehouses, and engineering offices in the US. The strike began at midnight on Sunday, September 15, 2019. The Teamsters union, which represents car hauliers, said it would honour the UAW picket lines and would not deliver new cars to dealers until the strike has ended. This is the first strike at GM in 12 years. It is part of a growing wave of strikes and job actions which started with the West Virginia teachers’ strike in 2018.

Strikes pose the question: who really runs the workplace? Is it the boss or the workers? It is through strikes that workers come to see themselves, not simply as individuals, but as members of class with common interests. It is through strikes that workers can come to understand the power they have to shut down the production and distribution of the goods they manufacture.

GM made more than $8 billion in profits in 2018. In 2017, GM’s CEO was paid almost $22 million in compensation. Life is great at the top! But where do profits come from—including the money used to pay CEOs?

GM workers built more than 8 million vehicles last year. The wealth of America’s #1 car company is generated collectively by those who build and distribute the cars and trucks and maintain the facilities, including the UAW and Teamsters. This is where the profit comes from—profits are the unpaid labour of the working class. 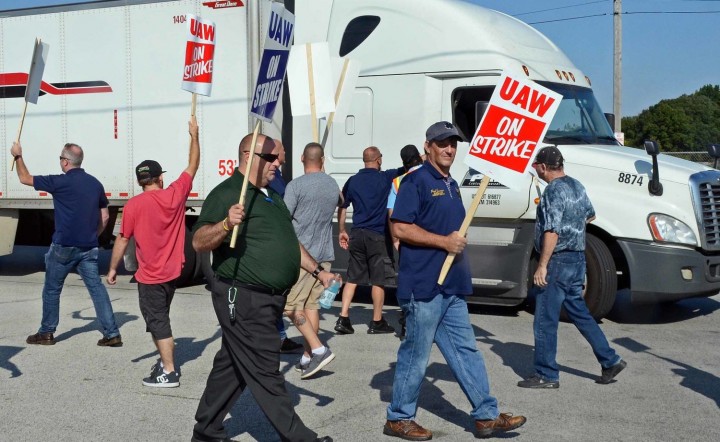 Strikes pose the question: who really runs the workplace? Is it the boss or the workers? / Image: Flickr, Bill Bryan

Earlier this year, GM launched an attack on our class by cutting 6,000 hourly jobs and 15% of its salaried workforce, even though the profits are through “the sunroof.” This plan would close a plant in Canada and four in the US, including the plant in Lordstown, Ohio.

This attack could have been used to turn the tables on the company. In our view, the UAW leadership should have joined with UNIFOR (the union of Canadian auto workers) and launched a campaign to stop this. They should have prepared the workers to carry out plant occupations. Instead, the leaders rolled over and accepted “the inevitable.”

In addition to generating widespread coverage and working-class solidarity, a strike at that time would have cut across GM’s ability to store up inventory. The New York Times reported on September 16, 2019 that GM dealers have 77 days’ worth of inventory. The company has clearly been preparing for some time to weather a protracted strike. Some would argue that the UAW had to wait for the contract to expire, but companies violate contracts whenever it serves their purpose. Workers must always reserve the right to negotiate a contract—or to strike—at any time. We must not be bound up by the laws of the capitalist class. Playing by rules that were written against our interests is a losing proposition.

According to the UAW leadership, this strike is about the following:

Following a formal meeting of the GM Council consisting of local union leaders, the UAW announced the membership is going on strike at midnight Sunday to secure:

The decision to strike comes a day after UAW Vice President Terry Dittes notified General Motors leadership that the Union would not agree to extend the Collective Bargaining Agreements.

The UAW leadership has put forward some very vague demands to say the least. What are “fair wages” when the CEO gets more than $21 million? Does “affordable healthcare” mean the high standard of care that top GM managers and owners receive? And what do they mean by “affordable?” Marxists argue that healthcare should be free and available to all.

“Our share of profits” buys into the “team concept” idea that workers and bosses are on the same side. Nothing could be further from the truth! What is needed is to abolish the profit system altogether—not merely a more “fair” distribution of the wealth created by the sweat of the workers’ labour.

In terms of job security, it should be spelled out simply: No lay-offs and all workers who are laid-off must be immediately reinstated. To this must be added: no to plant closings; a factory closed is a factory that must be occupied by the workers and nationalised to be operated in the public interest!

As for temps, all workers should have the same security, wages, and benefits. The whole idea of allowing “temps” goes against the principals that the UAW was founded on. All the workers must be treated the same—there must not be different classes of workers—those with protection and those without. The UAW was once known for lifting the standard of living of its members—not for allowing future generations to earn less than their parents. The UAW should demand that all temp workers who are brought into the union be treated exactly the same as the other members, with seniority rights, pensions, etc. 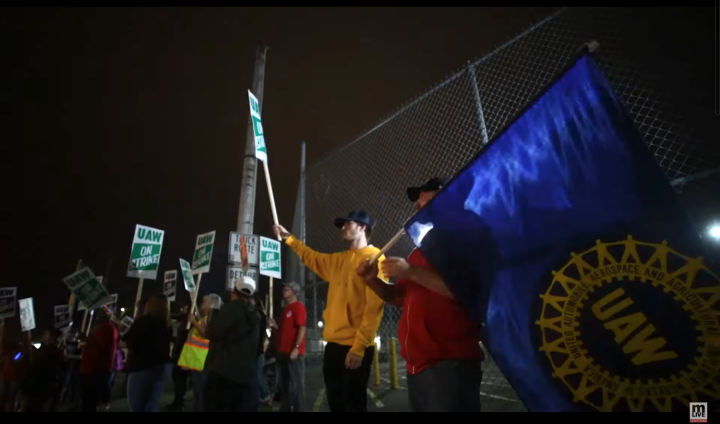 Workers shouldn’t buy into the idea that they are on the same “team” as the bosses / Image: fair use

GM is not an easy adversary. GM is a huge corporation and behind GM stand the banks, financiers and large stock and bond owners of the auto industry—the American ruling class! In order to beat this opponent, the UAW leadership must have clear demands that speak to the needs of the workers, coupled with a strategy to win. If demands are not clear, keeping workers on a picket line for a long period of time can lead to demoralisation and the weakening of the strike.

How to win strikes

Whenever workers go on strike, if unity is maintained, they can usually win. However, if the boss can successfully pit one group of workers against another, the strike can be defeated. GM workers need maximum unity. Getting Teamsters support for the picket line is a great step forward. What other steps should be taken?

The UAW must demand an immediate end to multi-tiered contracts, where those workers hired after a certain date are paid less than those hired at an earlier date. The seniority system gives veteran workers important protections, and certain job titles may be paid more than others, but generally, all those doing the same work should receive the same wages and benefits and all workers should be paid at the highest compensated tier.

The mood of many workers on the line was summed up to Reuters by Chaz Akers, a UAW member in Michigan who has worked for GM for 3.5 years:

The New York Times reported that workers hired before 2007 make $31 per hour and receive a pension when they retire. Those hired after make $17 per hour and—after eight years—can earn $29 per hour. But they only receive a 401k, a plan in which workers must save for their own retirement, and they get no traditional pension. Temps at GM make $15 per hour and get no dental or vision benefits not to mention any job security.

Many janitorial services done in GM factories used to be work done by UAW members. The UAW should demand that this work be returned to their jurisdiction, with the those doing this work becoming UAW members. In any situation where GM contracts work out, the UAW should be fighting alongside these workers and supporting their struggle to receive the same compensation, benefits, and protections that UAW members get. Any other strategy means these cheaper workers can be used to undercut the gains won in the strike.

There must also be unity of the workforce with unemployed—or soon-to-be-laid-off—workers. The UAW should demand all five plants—four in the US and one in Canada—be reopened and that all workers be rehired. If there are any cutbacks in production, the remaining work should be shared among the entire workforce and there should be no wage cuts. Let GM pay for cuts in production by lowering their profits and the pay of top executives!

Furthermore, GM is an international company, with factories around the world. The UAW leadership must have an international strategy. Their fight and demands must be linked with UNIFOR in Canada and unions in other countries, including Brazil and Mexico. If the workers outside US borders are not organised, the UAW should fight to represent them and make sure these workers are paid what workers are paid here. This would deeply cut across GM’s ability to undercut the compensation of UAW members in the US.

The UAW has tried to organise autoworkers for Volkswagen and Nissan. These campaigns have not been successful. The UAW leaders should study their own history. The UAW was originally built on the success of the 1937 Flint sit-down strike. The workers occupied the factory and they received support from GM workers in other plants. The success at GM eventually led to victory at all the other auto companies, including those owned by the notorious Henry Ford. In addition, the Flint sit-down strike led to strikes in other industries, including the service industry. In a little less than two years, 2.8 million workers joined unions. Workers will want to join the UAW and other unions if it means an increase in their wages and benefits!

The path to organising Volkswagen, Toyota, Honda, Mercedes, and Nissan is by building a militant union, which represents the workers’ interests and does not believe it can “work with management.” If workers could successfully work with management, they wouldn’t need a union!

All workers must support this strike

The vast wealth held by the richest one percent was “earned” by exploiting the working class. It is the working class that has a right to these profits. And if the boss cries poverty—as GM did during the 2008 “Great Recession”—we have an answer for them: The top 500 companies, including GM, should be nationalised under democratic workers’ control. We can cast aside the big business parasites and use the colossal resources created by the working class to build a society in which everyone can have a high-paid job combined with a shorter workweek with no loss in pay. But this can only happen if the workers run society.

The UAW is now fighting one sector of the bosses on the picket line. However, the UAW must fight the bosses at election time too. One sure way to put workers’ issues front and centre in 2020 is for the UAW to run independent union candidates against both big-business parties in congressional districts with concentrations of UAW members. They should call on the rest of the labour movement to break with the Democrats and Republicans and to back the UAW candidates to run candidates in their own strongholds. One of the demands could be for a repeal of Taft-Hartley and all anti-union laws. All of this would help lay the foundations for a mass, class-independent labour party to fight for socialist policies in the interest of all workers.

The strike at General Motors is important for all workers. No matter what industry you work in, a victory at GM will strengthen the working class as a whole and will help all types of workers organise their own unions. Likewise, a defeat will be felt by all workers. The entire labour movement must therefore back the strikers. Workers not in unions as well as students and the unemployed should also support their fight. Workers have tremendous power—but only if they are organised and mobilised to use it effectively.

All support to GM workers!

Picket lines mean do not cross!

Break with the bosses and their parties!