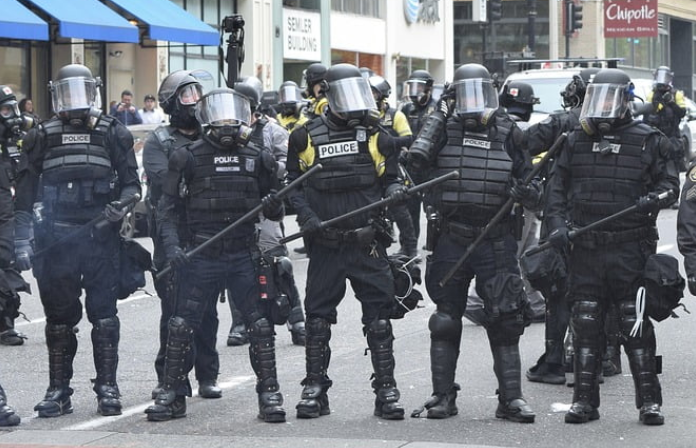 For weeks on end, the George Floyd protests against racism and police violence shook America. Support for the movement overflowed all demographic boundaries as an estimated 10% of all American adults—some 25 million people—participated in at least one protest. However, although mass gatherings have continued unabated in some cities, in most of the country the torrential river has inevitably receded into its banks as it was deprived of a revolutionary outlet—for now.

The revived BLM movement has been a treasure trove of practical experience for the millions who drove it forward. Not only did they get to feel the power of the mobilized masses, but they witnessed a degree of police violence never-before unleashed on such a large swathe of the population. Unbalanced by the depth and breadth of the movement, in an environment of economic and social crisis, the ruling class has been desperate to restore order. 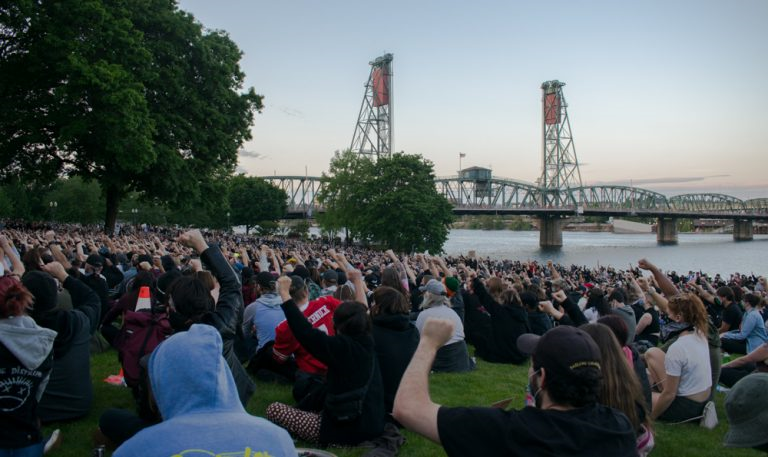 The revived BLM movement has been a treasure trove of practical experience for the millions who drove it forward / Image: joanbrown61, Pixabay

Several jurisdictions have waived restrictions on how long protesters can be held without charges. Videos have emerged of activists in Portland being pulled into unmarked vans by armed agents with no badges or identification. Subsequent journalistic investigations revealed that many of these were federal agents, from DHS and Border Patrol, possibly even supported by mercenaries. On July 28, matching these tactics, the NYPD warrant squad used an unmarked van and plainclothes officers to snatch a woman from a demonstration. They claim to have been merely serving an outstanding arrest warrant for “destruction of police property.”

Portland, Oregon, where protests have raged for nearly 70 consecutive nights, was at the center of the maelstrom after Donald Trump sent anonymous federal agents to “restore order.” In reality, however, these provocateurs only whipped up the violence, providing media fodder for Trump’s narrative that “anarchists and looters” are running amok in cities controlled by the Democrats, and that, therefore, a “law and order” president is needed come November. Likewise, Portland’s Democratic Mayor, Ted Wheeler, used the confrontation with Trump purely for partisan political posturing.

However, scenes of the now-famous “wall of moms” and “wall of veterans” being viciously attacked by camouflaged, nameless police exposes the lie and shows who the real instigators of violence are. Under enormous pressure from many sides, it appears that these agents have now been removed from the city. And surprise, surprise, the protests have been virtually violence-free ever since.

Scenes of the “wall of moms” being viciously attacked by camouflaged, nameless police shows who the real instigators of violence are / Image: Tony, Flickr

The scaling up of repression raises many questions about the nature of bourgeois democracy, and the future facing the movement. Some predict the end of democratic rights altogether. But what are democratic rights in the first place?

At the end of the day, society is people organized to meet certain needs. Today, this is done on the basis of capitalism, a system of private ownership of the means of production. At the heart of this exploitative system is the struggle between the working class and the capitalist class over the surplus wealth produced by the workers. These relations are codified to the benefit of the ruling class in the US Constitution and in the countless laws that have come into force since it was adopted. But constitutions and laws merely reflect the balance of forces between the classes at the time they are written—an uneasy compromise between what the masses fight for and what the rulers are forced to concede.

Trump and his Republican cabal are enemies of the working class, but attacks on our democratic rights are not at all unprecedented—although the liberal defenders of capitalism rarely mention this. As an example, Democrat-turned-Republican-turned Democrat, Mayor Michael Bloomberg, had thousands of peaceful protesters arrested during the 2004 Republican Convention in New York City. They were held without charges until the convention was over before being released. Since Bloomberg is now opposed to Trump, this egregious violation of basic rights is not mentioned in the bourgeois media at this time.

In light of recent events, many on the left see “creeping fascism” or “authoritarianism.” Trump’s task force has even been compared to the Nazi Gestapo. It is absolutely true that Trump would like to rule untrammeled by the Constitution, and would gleefully unleash his thugs against all those who oppose him—if he could get away with it. But the class balance of forces, which is overwhelmingly in favor of the working class, means this is easier said than done. The reality is that this show of intimidation by a handful of federal agencies is a sign of weakness, not of strength by the bourgeois state.

Under mass pressure from below, there are tremendous divisions in the ruling class, both between and within their parties, starting with how best to contain the mass movement—the carrot or the stick. But there are also divisions within the various federal police forces themselves. In the 1960s, the FBI was a thoroughly centralized agency under the notorious J. Edgar Hoover. Now it is rife with pro- and anti-Trump elements. 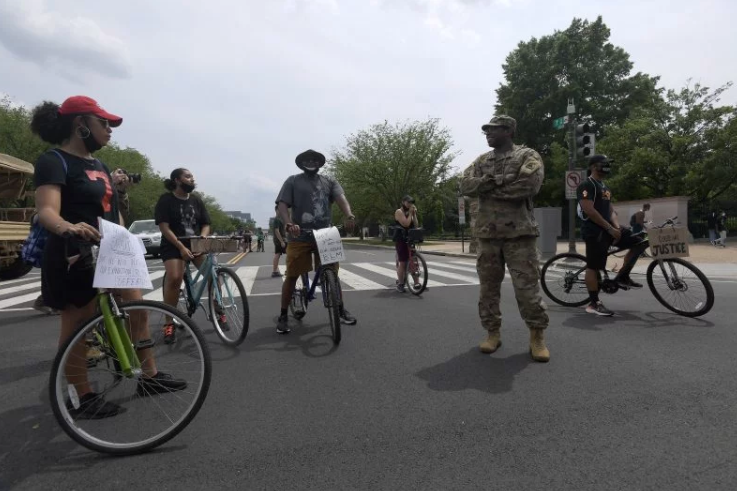 In places like Washington, DC, the National Guard was utterly demoralized and ended up fraternizing with protesters / Image: US Army

Additionally, not all the forces of the state can be relied on to repress the population. In places like Washington, DC, the National Guard was utterly demoralized and ended up fraternizing with protesters, often refusing to do much more for their commanding officers than stand around. Both the divisions in the state apparatus, and the unreliability of the National Guard, contributed to the need for this cobbled together mishmash of federal forces to carry out his dirty work.

The colossal size and potential power of the working class is an immensely complicating factor for the ruling class if it moves to bypass formal bourgeois democracy. In recent weeks, we have seen how curfews proposed in several major cities were quickly rescinded when the masses would not obey. All of this was achieved with little in the way of a unified strategy and program of resistance.

No rights are sacred or eternal, and when the masses push beyond what the capitalists are comfortable with, they will move to re-establish “order,” i.e., to ensure that class exploitation can continue within their preferred boundaries. As long as the capitalists run society, the workers’ movement must have no illusions in the permanence of even the most basic rights. Unlike the liberals, however, Marxists view these rights as a means to an end, not the end in itself. While it is an essential part of the struggle, the fight to preserve our basic democratic rights is just one part of the broader fight for socialist revolution.

The working class and its organizations, starting with the unions, must tenaciously defend and expand our rights. But there is no reason for despair—and no reason we should remain on the defensive. Even without a mass socialist party of our own, class-struggle unions, or a revolutionary program and leadership, the workers were able to push back the ruling class’s efforts to terrorize us. If we set ourselves the task and succeed in building such tools of struggle in the next historical period, we will have many chances at victory before any kind of police or military dictatorship can be established.

The organic unity of the working class

US imperialism is the most violent and destructive force on the planet, responsible for untold millions of deaths worldwide. But while entire nations live under the shadow of Uncle Sam, on the home front, this kind of unchecked violence is typically reserved for the poor, black, Latino, indigenous, and immigrant population. Now, however, in the face of an unprecedented mass movement, the repression is being generalized—and the real nature of bourgeois democracy is exposed for all to see. 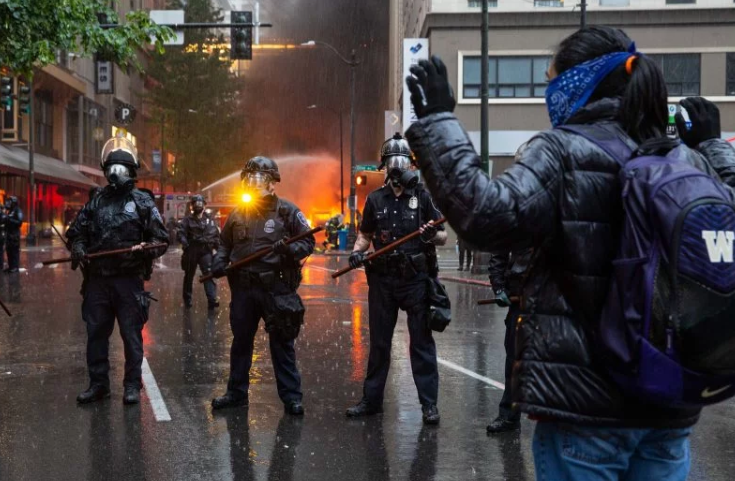 In the face of an unprecedented mass movement, brutal repression is being generalized—and the real nature of bourgeois democracy is exposed for all to see / Image: Kelly Kline

Popular trends of thought among liberals and the left see the oppression of black people, immigrants, LGBTQ people, etc., as separate “structures” which may or may not “intersect” at the level of individuals. To them, the violence of imperialism abroad is either a necessary evil, or the result of bad decisions by elected officials.

The logical conclusion of such an atomized approach is that every individual is, in a personal capacity, either an oppressor or oppressed. Likewise, every struggle is hermetically sealed off and specific, with other oppressed individuals and groupings able to act, at best, as “allies.” The reactionary essence of this approach was evident among those who advocated limiting the role of white people at BLM protests—which played right into the hands of the “divide and rule” policy of the ruling class, as well as the government’s narrative about “outside agitators.”

By contrast, Marxists understand that oppression of various groups, while concrete, is organically rooted in the social relations of capitalism—the sputtering engine of society as a whole. This is why Marxists focus on the key role of the working class. It is the labor of the workers that is the key to capitalist profits, the basis of all power in our society. Goods and services can be produced without the capitalists—but not without the workers.

Unlike many forms of oppression, class doesn’t always appear on the surface as an identity. Not every part of the working class has the same history, is exploited in the same way or to the same degree, or has to deal with the same types of oppression. Capitalism is carried along by forces that are not consciously controlled, and the underlying economic structures are not immediately obvious. This is why, in normal times, there appears to be a near-infinite variety of individual experiences, along with diverse ideas about each person’s place in the world. The many divisions and tensions that arise out of this are extremely useful to those who sit at the top.

One such use is that the ruling class is given a free hand to experiment with and refine the tools of repression against certain parts of the population without fear of a generalized backlash. Tools like rubber bullets, which growing layers of the American working class are now becoming acquainted with, were developed in colonial occupations. And the precedent for the US state disappearing people outside the purview of the legal system was established by the treatment of “foreign enemies” and undocumented immigrants. But once tools designed to uphold the status quo come into existence, they do not stay confined to a limited part of the population forever.

This is why the struggle for freedom of all oppressed people, in the US and internationally, is a matter of life and death for all workers—whether we are individually affected at the present time or not—and can only be achieved through revolution. In times of generalized crisis, the relative privilege enjoyed by a few is as fleeting as our jobs and homes. In such times, our mutual class interests also come to the fore and we are compelled to recognize that to win a new society, we need a unified struggle that leaves no stone of the current system unturned. The solidarity on display in cities both large and small in recent weeks is just a hint of what’s to come and should fill us all with hope for the revolutionary future.