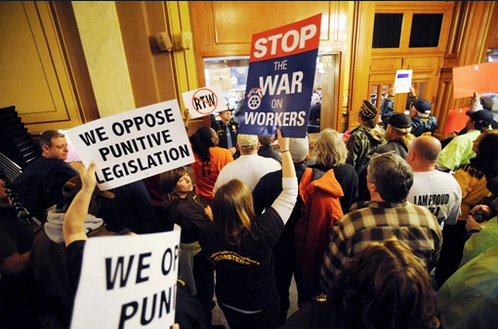 In their relentless quest for profits, big business must continue to drive down workers' wages, benefits, and conditions—and unions are in their way! Recently, the Indiana state legislature and governor made it the first industrial state in the Northeast/Midwest to adopt so-called "right to work" legislation. This law is intended to weaken and destroy the unions. This is a warning to the labor movement!

Despite these attacks, millions of workers would like to join unions. This is because workers bargaining collectively against the boss have more strength than workers bargaining in isolation against the bosses' armies of lawyers, human resources departments, management, and security. On average, union workers make higher wages, work in safer conditions, and receive better benefits than their nonunion counterparts. No wonder so many people would like to join a union.

The Bureau of Labor Statistics (BLS) announced on Friday, January 27, 2012 that union membership grew by 48,000 to 14.76 million, from 2010 to 2011. However, the rate of union membership as a percent of the labor force dropped from 11.9% to 11.8%. This can be explained by the fact that the working age population has grown more quickly than the unions. But we must ask: why haven't unions kept up? The vicious attacks on organized labor and the slashing of millions of union jobs in the last few years is one obvious reason. However, the fundamental reason labor has not been able to bridge the gap is due to the policy of "partnership with the bosses" adopted by the union leadership, both in the workplace and the polling booths.

The latest statistics show that labor has been unable to organize massive numbers of new workers in unions. This is in spite of the fact that polls show that workers would prefer to belong to unions rather than deal with the terror of the boss at work. If this is the case why aren’t more workers joining unions?

The labor movement went from roughly 3,000,000 members in 1934, to more than 8,000,000 by 1940. Those six years were characterized by the Teamsters and United Auto Workers organizing in the Midwest, citywide general strikes in several cities, and the colossal rise of the CIO (Congress of Industrial Organizations), including in the South. Although the current leaders may not like to admit it, the unions were originally built and organized by the left: communists, socialists, and Marxists. On what basis did they build these unions? What are the principals of class struggle trade unionism?

The main reason for the defeat of so many organizing campaigns today is that the bosses terrorize the workers, fire the leaders, and threaten them with loss of their jobs, while the unions "play by the rules" and patiently wait for NLRB elections. A new strategy is needed!

When unions meet up with new workers who want to organize at their work place, they should not just get them to sign up members and passively prepare for a representation election. They should train these workers in the class struggle unionism that led to victory in the 1930s. They must explain that the power of unions is the power of workers organized and united to withhold their labor from the bosses if necessary. They should educate them in labor history and examine the lessons, the victories and the defeats, from the great battles of the past. 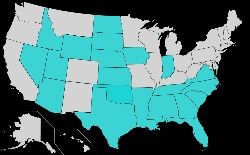 "Right to Work" statesFor example, if a union wants to organize a bank, they should not try a “branch-by-branch” strategy. Organizing a larger campaign would be much more effective. The union’s goal should be to get the bank to recognize the union’s right to represent its members wherever they work, and regardless of whether they make up a majority in a particular branch. This should not just include workers at bank branches but also those in call centers and offices. If the union were to win recognition and improve wages, working conditions, and benefits for its members, nonunion workers would be inspired to join in the fight.

By coordinating with unions in other countries who cover call centers and operations of the same banking corporation, the union could fight on a global scale to prevent the attempts of the companies to pay for these increases by attacks on our brothers and sisters overseas. It would also try to unite all the workers together, so the company will not be able to ship some operations to other countries or regions as a way to avoid dealing with the newly organized workers. Ultimately, all the company's workers should be paid the same high wages and benefits wherever they live!

Just one major victory would electrify workers and young people around the country and also the world, as did the 1997 Teamsters strike at UPS. In order to achieve the first major victory, it would be necessary to recruit workers who are willing to be leaders in the struggle, and the union must connect this movement with the rest of labor. Other unions must be asked to show their solidarity and support such for a campaign in specific ways. This is particularly important in other unions connected to the banks, such as electricians who fix their elevators, truck drivers who deliver paper and supplies, and communications workers who provide telephone lines and internet service. These appeals to other unions must be explained: if labor is strengthened by this organizing victory, it will help the workers in other sectors and industries, including those currently not in unions.

Sooner or later, labor must relearn its own history. Recent statistics are evidence that the present strategy is not working. When labor leaders say "we must be practical! Just look at the anti-labor laws!" we must reply by pointing out that it was never easy to organize unions as the law is always on the bosses' side.

The attacks in Indiana are just the beginning. "Right to work" legislation is in the pipeline in several other states. But we cannot effectively fight this legislation only on a state-by-state basis. It is the federal government's Taft-Hartley law which permits states to become "right-to-work." As part of the struggle to organize new members, we must fight to get Taft-Hartley repealed. But labor cannot expect to effectively fight the bosses on the picket line, if we then vote for the bosses' parties at election time!