United States
Share
Tweet
Beginning Friday, around 300 workers at the Republic Window & Door factory in Chicago have occupied the plant demanding severance and back-pay owed by the company. For the first time since the birth of the CIO union federation in the 1930s, US workers are occupying their workplace. As the bosses push to place the burden of the failing economy on workers' shoulders, the class struggle is back on the agenda in the US.

Beginning Friday, around 300 workers at the Republic Window & Door factory in Chicago have occupied the plant demanding severance and back-pay owed by the company. For the first time since the birth of the CIO union federation in the 1930s, U.S. workers are occupying their workplace. As the bosses push to place the burden of the failing economy on workers' shoulders, the class struggle is back on the agenda in the U.S. 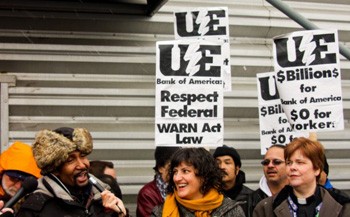 The 300 mostly Latino members of the United Electrical Workers union began the occupation on the last scheduled day of operations before the bosses would close the factory. The company gave the workers less than 60 days notice of the closure, in violation of federal labor laws. The company reported that its monthly earnings had dropped by around 25% to $2.9 million. But the company continued filling orders through the last scheduled day of operation, which gave workers little room to believe that the factory needed to close its doors.

Republic management told workers that it was necessary to close the factory in order to get loans from its main creditor, Bank of America. UE workers picketed the Bank's Chicago headquarters on December 3rd. Despite pledges from the bank and Republic management for a meeting on Friday with the UE local 1110 to discuss severance and other issues, this meeting was sabotaged when Republic management failed to show up. Workers replied by occupying the factory. 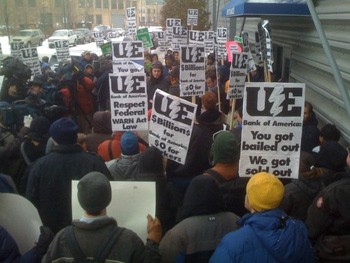 Bank of America was one of the many large banks to get a part of the gigantic $700 billion bailout package approved by the Democratic and Republican parties in Congress in October. It was also supported by both Barack Obama and John McCain. Yet despite getting billions from the taxpayers, the vast majority of whom are working class , the bankers refuse to use public money for anything other than private gain. This is a painful reality of capitalism!

The other side to this reality is that it is not possible to get any meaningful concessions from the bosses, even something as basic as severance pay, except through the class struggle. We have to ask, if Bank of America is being "fueled" with public money, why is there not public ownership? If Republic is getting public assistance, this money should be used to keep the factory open and workers in their jobs. If there is no room for the bosses to continue making a profit, place the factory under public ownership and democratic workers control, send the bosses packing without compensation and remove the profit motive. In the meantime, the only way UE workers will receive the severance and back pay owed to them is through maintaining the occupation until management and Bank of America relent. To do this, UE workers need the full support of the wider labor movement. 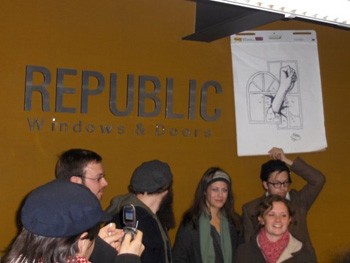 This sit-in occupation of the factory is an example for millions of other workers across the U.S. who are facing a growing wave of layoffs, closures, pay and benefit cuts. Solidarity rallies have already been organized in the Chicago area. The AFL-CIO and Change to Win union federations should now mobilize the labor movement on a national scale to support the Republic workers. An injury to one is an injury to all!

The Workers International League joins others in solidarity with UE local 1110. We ask our readers and supporters to email solidarity letters to UE Local 1110, and to call on our unions to pass solidarity resolutions and to organize solidarity actions.

Solidarity messages can be sent to UE Local 1110 at: leahfried@gmail.com