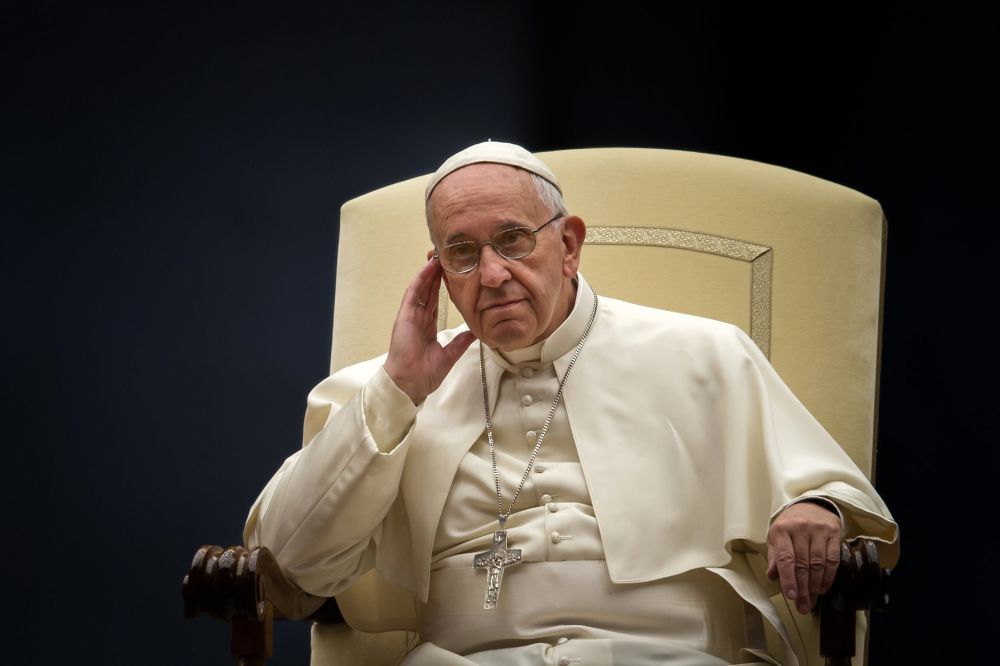 There was a time in which news of a scandal in the Vatican shocked the world. However, as story after story is unveiled, and the global number of Catholics diminishes, the mere mention of priests, the Vatican, and even the pope himself conjures up images of corruption, decadence, and depravity. It epitomises the rotting nature of the religious institutions that have been a pillar of class society for so long.

The Vatican is a place of grandeur and opulence, with its own God-anointed bank to help oversee its administration. In fact, Popes Benedict and John Paul II both had their bedrooms just two floors above it!

In the Bible, it states that it is easier for a camel to pass through the eye of a needle than for a rich man to go to heaven. Yet for years, the Vatican has been funnelling billions of euros between various foreign banks, accumulating as much as possible to invest in lucrative property deals.

In October 2019, the offices of the Vatican’s Secretariat of State were raided. The purpose of the Secretariat of State is to be custodian of charitable donations made to the Church by Catholics around the world. Law enforcement officers seized a number of items that held evidence of the most recent scandal to hit the Church.

In the raid, it was found that high officials were using church money to invest in real estate in London and elsewhere. In particular, luxury apartments in Chelsea, south west London, saw $200m worth of investment. The Church preaches the virtue of helping those less fortunate, while profiting off the heavily inflated London housing market that is making life miserable for so many.

It was also revealed that the secretariat had been considering investing in oil fields in Angola. God created the earth, according to the Bible, but the Vatican will cheerfully invest in oil fields that will pollute and kill it.

Not only is the Church is gambling on the property market, but speculative investments were found to have been funded by borrowing from discredited institutions and applying for grants on misleading information. Just like the most unscrupulous hedge fund managers, the Vatican is playing around with speculation and bets to try and make as much money as it can. What was uncovered were heaps of cases of money laundering, embezzlement and fraud.

A history of dodgy financial dealings

Back in 2010, the Bank of Italy launched an investigation into the finances of the Vatican and found it to be transferring billions of euros between different commercial banks yearly. Since then, the Church is increasingly being forced to open itself up to external investigation, which have brought to light all sorts of dodgy dealings. 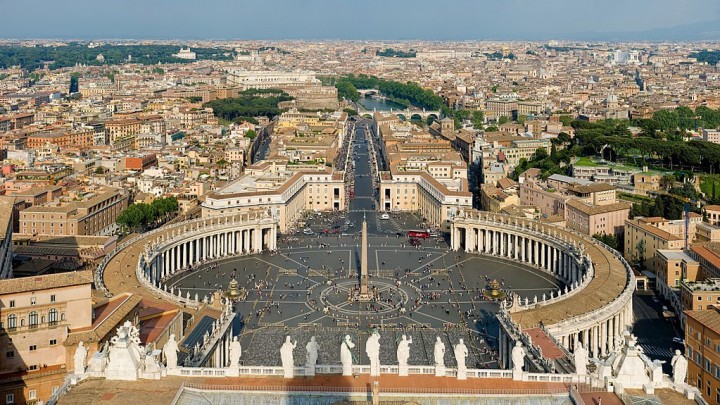 The gilded halls of the Vatican conceal a cesspit of corruption / Image: Diliff

In 2013, one of its biggest cases of corruption took place. Nunzio Szigarno was the auditor of the property administration of the Apostolic See. He went by the nickname Monzignor Nunzio Szigarno because he was known to carry on his person $500 bills. Eventually, his decadent lifestyle raised too many eyebrows. Both he and a former secret service agent were arrested for fraud in 2013 on suspicion of smuggling 20 million euros via private plane to Switzerland. The case is still going through appeals.

All of this corruption can be done smoothly, thanks to the existence of the Vatican bank. The set up of the economy of the Vatican state is very useful for those who wish to exploit it. With little-to-no oversight whatsoever of the Vatican’s finances, billion-euro property deals and other transactions can be carried out with a minimum of fuss or accountability. As well as the billions it receives from Catholics all over the world via donations, the Vatican has a unique set of rules with Rome, and the EU, to ensure its continued revenue. Mostly, this involves a series of tax loopholes, with no tariffs on any imports or exports to the state.

In a capitalist world, where greedy and corrupt bankers can get away with murder, as we saw in 2008 when the economy crashed and the banks were bailed out while the rest of us have been made to pay, the Vatican is the most degenerate den of financial misdoings on the planet.

The failing power of the Church

The last few decades have seen a relative weakening of the influence of the Catholic Church, with various political crises unfolding over whether to move in a more ‘liberal’ direction or strictly adhere to its religious dogma. This political turmoil came to the fore when, in 2013, Pope Benedict XVI abdicated from the role, the first pope to do so since 1415.

The seemingly endless scandals of paedophilia and abuse that have been unearthed, especially in recent years, have delivered crushing blows to the Vatican’s authority. And as the Church’s moral authority has eroded over the years, so too has its seemingly unimpeachable financial standing. Scandal after scandal have chipped away at the markets’ confidence in the Vatican’s finances, and has given confidence to its competitors.

For a long time, Catholic churches were exempt from paying tax on any properties that had a chapel. Their size didn’t matter. This allowed the Vatican to avoid paying at least four billion euros’ worth of tax on hundreds of properties in Rome.

But now, the European Court of Justice has ruled that this practice was illegal and ordered the Vatican to pay back €4bn in post-dated tax. The Court ruling is illustrative of the fall from grace that the Church has suffered. Where it once had powerful friends in every country, now it finds the smiles have turned to snarls.

Thus, when Pope Francis was anointed, his ascendancy was supposed to usher in a new beginning for the Church. His was a ‘kinder face’ who would make Catholicism less about hating gay people and women, and more about ‘love’. 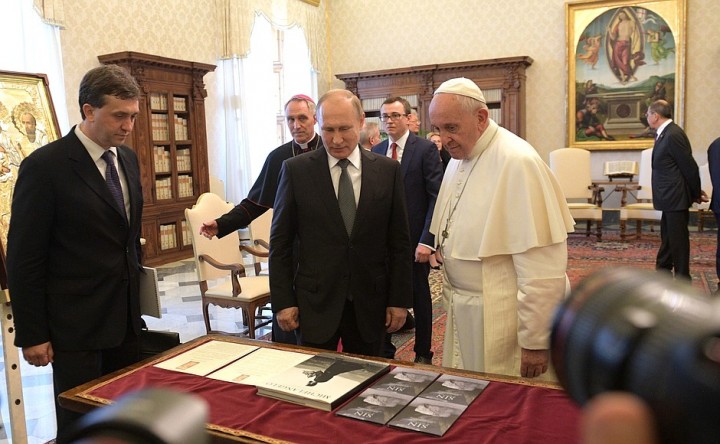 Pope Francis is supposed to be the 'kinder face' of the Church. But no beneficent smile can detract from its rotten role in society / Image: PoR, Flickr

To accompany this new, modern approach, there was also to be significant financial reform. More transparency was promised. Indeed, the news of the most recent scandal has led some to declare that this is proof of progress. Yes, there is still lots of corruption, but at least a small portion of it is out in the open!

Pope Francis was asked about the October raid and its findings, which he said was proof of the success of his reforms. But, like any good hedge-fund manager, he added that the purpose of Vatican funds was the same as that of a "widow's investment," which is putting money into a variety of investments, so that if one fails, the entire fund is not lost. Notwithstanding the fact that all the investments must be “moral”. The Pope admitted that the recent investments were ‘not clean’.

A new netflix documentary, The Two Popes, attempts to paint Pope Francis as a reformer. In the programme, which is drama mixed in with real recordings, we see Francis berate Pope Benedict for failing to address scandals in the Church, and not doing more to fight inequality. Pope Benedict is presented as an old conservative. Francis, on the other hand, has a ‘progressive’ approach. He tells us that nothing is static in nature, everything changes, including God, on his journey to us.

Leaving this pro-Francis propaganda to one side, the truth is that no individual Pope can undo what the Catholic Church has done and the role it plays in society. It is an instrument of class rule and will always be used to defend the interests of the ruling class. Francis can try to paint a smiling face across it; try to cover up the corruption and abuse which has become associated with the Vatican, but it won’t change the Church fundamentally.

The real role of the Catholic Church

Is corruption inherent to the Church? Only inasmuch as it is inherent to the capitalist system itself. Bankers broke all kinds of rules prior to the 2008 crisis, but they ended up bailed out, while ordinary people were presented with the bill in the form of cuts and austerity. Apparently, that’s not technically corruption, but we all know better.

Politicians can take gifts and donations from big business and then push policies that will benefit those businesses in parliament. Apparently this is all perfectly legal, but anyone can see this is as corrupt as it gets.

Likewise, the Catholic Church takes money from the poor, the sick and the elderly in exchange for a promise of a better existence in the clouds after they die, as long as they do everything they’re told here on Earth. It then gambles that money on investments and stock markets to pay the wages of Popes, Cardinals and Bishops, who live lavish lifestyles. Apparently this isn’t corruption, but anyone with eyes can see the truth.

Even if Francis were to clean the Vatican up to be a model of financial responsibility, it would remain a pillar of the bourgeois establishment, just as corrupt as any other part of capitalist society.

What we need to understand is the role and purpose the Church has served historically. From the days of the Roman Emperor Constantine, who made Christianity the official religion of the Empire, the Catholic Church has propped up the ruling class through control and repression. Although society has changed many times in the past 2,000 years, the mutually beneficial alliance between the Catholic Church and the ruling class has evolved alongside it.

Today, the Church is used to influence the billion or so Catholics across the world. Its alleged separation from the state (in some places) allows its reactionary views to be presented without explanation, justification, or even the minimum of bourgeois democratic accountability. Such a valuable tool is used by the ruling class in exchange for tax breaks and state subsidies for the Church.

While the specifics of the Church’s influence are dependent on each country and its history, its fundamental role in upholding class society remains unchanged wherever it is found. It’s therefore no surprise that, in particular, the Church has always been a bulwark against communism and the spread of revolutionary ideas. In 1949, under Pope Pius XII the Vatican issued the Decree against Communism, demanding that any Catholic professing communist ideas be excommunicated. Even the ‘progressive’ Pope Francis banned books on Marxism in his past.

A crumbling pillar of the establishment

As the crisis of capitalism deepens, this impacts its ideological defenders. All the pillars that currently hold up the capitalist system are being shaken to their foundations. At one time, the Church could be used to stabilise situations of unrest. Now it seems less likely that it will be able to play that role. 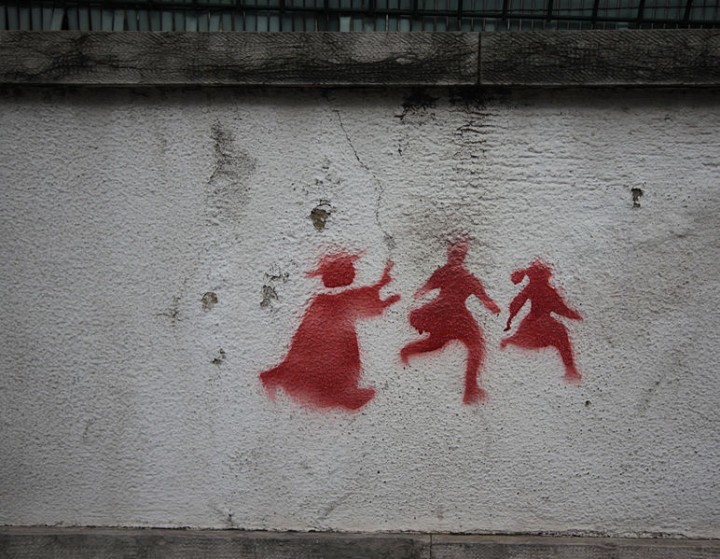 One scandal after another has rocked the Catholic Church, shaking its moral authority to its foundations / Image: Milliped

The number of people attending church in Europe is rapidly decreasing, especially young people, and donations coming in from Catholics are drying up. This is linked to the hatred many people feel toward the institution, its abuses, corruption, and privileges.

The recent referenda in Ireland on gay marriage and abortion are an indication of how the Church is losing its grip. In some cases, evangelicals are spending time in African countries to try to ‘win the debate’ elsewhere. But none of this will reverse the trend, which is born of the crisis of capitalism itself.

As the class struggle develops all over the world, the Church will be increasingly forced to expose itself as a counter-revolutionary force. The fight for international socialism will sweep it into the dustbin of history along with the capitalist system as a whole.

The scandals we are witnessing in the Church at the moment are just small cracks, which will be forced open by the approaching class struggle to bring the vaunted Vatican and Catholic Church crashing down to earth.