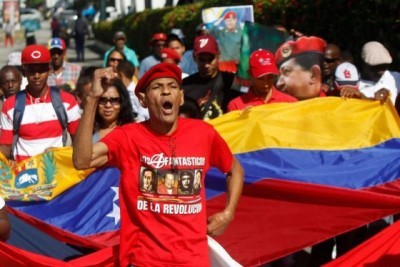 As was expected, Venezuela’s municipal elections on December 10 produced a landslide victory for the ruling United Socialist Party (PSUV). It won 308 out of 335 local councils winning in 23 out 25 state capitals. The opposition, which stood divided and largely boycotted the election, only managed to win two significant local councils, those of San Cristobal, the capital of Táchira and Libertador, the capital of Mérida.

The reactionary pro-imperialist opposition is ending the year 2017 extremely fractured, with their ranks demoralised and without a clear strategy, after the defeat of their violent attempt to overthrow the government in the first half of the year.

Revolutionary left candidates against the bureaucracy

The weakness of the opposition opened the way for all the pent up contradictions within the Bolivarian camp to come to the fore. In a number of municipalities there were left-wing challenges from within chavismo against the official PSUV candidates.

In the capital Caracas, Eduardo Samán stood as a candidate for the Libertador council, which covers most of the city’s centre and western working class and poor districts. A former government official and minister under Chavez, known for his fierce opposition to the capitalists and multinationals, his struggle against racketeering and his defence of workers’ control, Samán was standing on the PPT (Fatherland For All) ticket as well as that of the Communist Party (PCV). 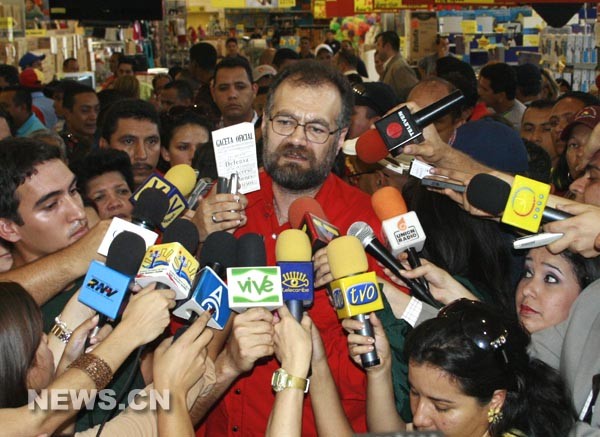 Eduardo SamánHe faced constant sabotage on the part of the state and the PSUV bureaucracy and was effectively banned from appearing in the media. Furthermore, his name was not even printed on the official ballot papers! In the end he received 6.6% of the vote against 66% for the official chavista candidate Erika Farias. Nevertheless his campaign managed to gather in a joint effort most of the revolutionary left of chavismo in Caracas.

Amongst those challenging official PSUV candidates from the left were Jesús Silva in the Moran council (Lara) who managed to get a very decent 16% of the vote. In the Cajigal council (Sucre), Augusto Espinoza, a leader of the local communal movement received 51% of the vote beating the PSUV candidate who got 45%. In the Paez council (Apure) a candidate of the Bolivar Zamora Revolutionary Current, Chema Romero, won with 61% of the votes, though in this case he had the support of the PSUV.

The most scandalous examples of bureaucratic manoeuvres to prevent left-wing chavista candidates from taking over were in the Monagas Libertador council and in the Simon Planas council in Lara. In the first case, the PCV backed candidate Régulo Reyna won a massive 62% of the vote, against 30% for the PSUV candidate. Here, incredibly, the National Electoral Council (CNE) argued, after the election, that the Constituent Assembly, of which Reyna is an elected member, had not given him permission to stand. Therefore, in spite of the fact that his candidature had been accepted by the CNE, that he had not been notified of any impediments and his name was on the ballot paper, the CNE declared his candidature void and declared the previous PCV candidate, Presilla, as the winner! As Presilla refused to participate in this sham, the CNE then appointed a provisional mayor. The PCV and the local population are up in arms and are continuing to fight to get the winner, Reyna, recognised.

In the case of Ángel Prado, in the Simón Planas council (Lara), the situation is equally scandalous. As we explained previously,  Prado is a leading figure in the communal movement in his council, involving thousands of poor peasants and workers. He was elected to the Constituent Assembly in July 2017 with massive support. He then collected thousands of signatures backing him as a candidate for the local council. The National Electoral Council then turned around and said he needed permission from the Constituent Assembly to stand. Despite overwhelming support for his candidature and the fact that plenty of CA members were candidates, the presidency of the Constituent Assembly denied him permission to stand.

Basing himself on the mass mobilisation of the poor peasants locally, Prado insisted he would stand on the PPT ticket and that anyone voting for the PPT would be voting for him. The CNE then printed ballot papers in which the PPT was supporting the official PSUV candidate. However, defying this kafkian situation, 57% voted for the PPT and only 34% for the PSUV. Since Prado’s name was not on the ballot paper, the CNE insisted that the winner was the PSUV candidate Jean Ortiz. The masses then surrounded the local town hall to prevent him from being sworn in. Since then thousands have marched to Caracas, petitioned the Constituent Assembly and the president and have vowed not to give up until the rightful winner is proclaimed.

Lessons of the struggle in the council elections

All of these conflicts and tensions within chavismo, though limited to a minority of municipalities, reveal a number of very interesting features.

First, that the state and party bureaucracy will not stop at anything to remain in power and smash any potential challengers from within the left wing of the movement. The methods used against these candidates are in reality very similar to those used during the Fourth Republic which chavismo smashed back in 1998-2000: political patronage, intimidation and threats, media blackout, the use of state resources to cajole people to vote for the “right” candidate, etc.

Second, that there is a widespread mood of anger and discontent amongst the Bolivarian rank and file against the bureaucracy and the reformists in the leadership and in the state, which they see as increasingly moving away from the genuine ideals of the movement. This is compounded by the severe economic crisis and the government making all sorts of concessions to the capitalists and sections of the right-wing opposition. Although this movement is still largely disorganised and scattered, the campaign for these candidates in the municipal elections and then the struggle to defend their victories has provided a focal point for the revolutionary left of chavismo which has, perhaps for the first time, developed links nationally.

It is not by chance that all the areas where the revolutionary left is better organised are rural and linked to communes. They are better able to produce at least basic food products and thus partially avoid the worst effects of the economic meltdown. In the main cities, on the other hand, the pressure of the struggle for daily survival has dealt a severe blow to the level of political activity of the Bolivarian masses. 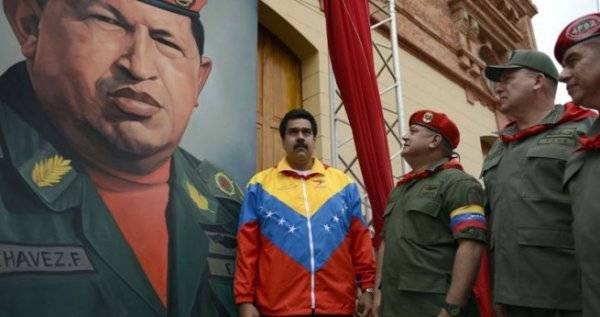 Image: Miquel Garcia EsranxerAs we enter 2018, the defeat of the opposition’s offensive in the  first half of 2017 has not really solved any of the underlying problems facing the Bolivarian revolution. The severe economic crisis is compounded by financial sanctions imposed by Washington and has forced the government to move towards renegotiation of the foreign debt. The policy of Maduro has been effective in weakening the right-wing opposition and so he is likely to move to early presidential elections in the coming year. But in reality the government has already made concessions to the capitalist class on many of the crucial aspects.

There is an offensive against corruption in PDVSA which has seen dozens of high ranking officials,, and even the company’s president and the Oil Minister, indicted. There is no doubt that there is corruption at all levels of the company, but it is difficult to escape the conclusion that this campaign is also part of an internal purge against Rafael Ramirez. He is the Venezuelan ambassador to the UN (a position from which he has been forced to resign) and former PDVSA president and Oil Minister and therefore a powerful figure, against whom criminal proceedings have also started.

Meanwhile, the Central Bank has pursued a crazy policy of printing money without any control, so that the government could pay Christmas bonuses ahead of the December 10 municipal elections. This, of course, has added to the already severe problems of hyperinflation. Between October 20 and December 8, the money supply doubled, with 5 consecutive weeks in which it went up by over 9% each week! The money supply went up by 800% in the first 11 months of the year and has increased by 12,000% since Maduro was elected in April 2013.

In reality what we have is a government which uses increasingly bureaucratic and authoritarian methods to stay in power, while at the same time giving away many of the gains of the revolution by making concessions to the oligarchy. If the opposition were to come to power, on the other hand, they would launch an all out assault to make the workers and the poor pay the full price of the crisis.

The ruling class is toying with the idea of standing businessman Lorenzo Mendoza as a candidate against Maduro in the 2018 presidential elections. He is one of the most powerful capitalists in the country, controlling the food production and distribution monopoly Grupo Polar and kept at a prudent distance from the opposition’s violent attempts to overthrow the government in the first half of 2017. He would probably stand with the argument that “at least a businessman knows how to run the economy” and would pretend to be independent from the discredited violence of the right-wing parties.

As we have warned for a number of years, the policies of the Maduro government are preparing the way for the return of the oligarchy to power. The only way forward is for the revolutionary left of the Bolivarian movement - which we saw emerge, incipiently, here and there, during the municipal election campaign - to get organised at a national level with a clear revolutionary socialist programme.

Events in 2017 have shown that there is, despite everything that the masses have endured, a healthy class instinct of rejecting the right-wing opposition’s violent attempts to overthrow the government. The workers and the poor know full well what a victory for the oligarchy would mean and that they would have to pay the price.

This healthy instinct is cynically used by the bureaucracy with the sole aim of staying in power. In this situation, any challenge coming from the left must clearly work within the framework of the Bolivarian revolution. If sectarian mistakes are made that allow the bureaucracy to depict these groups and trends as being part of the opposition they would be discredited in the eyes of the wider masses.

A revolutionary opposition coming from within the rank and file must have as its central idea the reclaiming of the genuine traditions of chavismo, those of rank and file democracy and participation, accountability of the leadership, workers’ control and the struggle against capitalism. It is the PSUV bureaucracy which has betrayed the legacy of Chavez, not the left opposition that is emerging within the movement.

The starting point of a movement to regenerate chavismo must be the last statements of president Chavez where he warned that two key tasks were pending: the building of a socialist economy and the destruction of the bourgeois state. It is not the revolutionary left but rather the bureaucracy which have broken with the Bolivarian movement and betrayed its principles.

If the municipal elections of December 2017 served to sow the seeds of such a movement, then that would have been a good beginning.