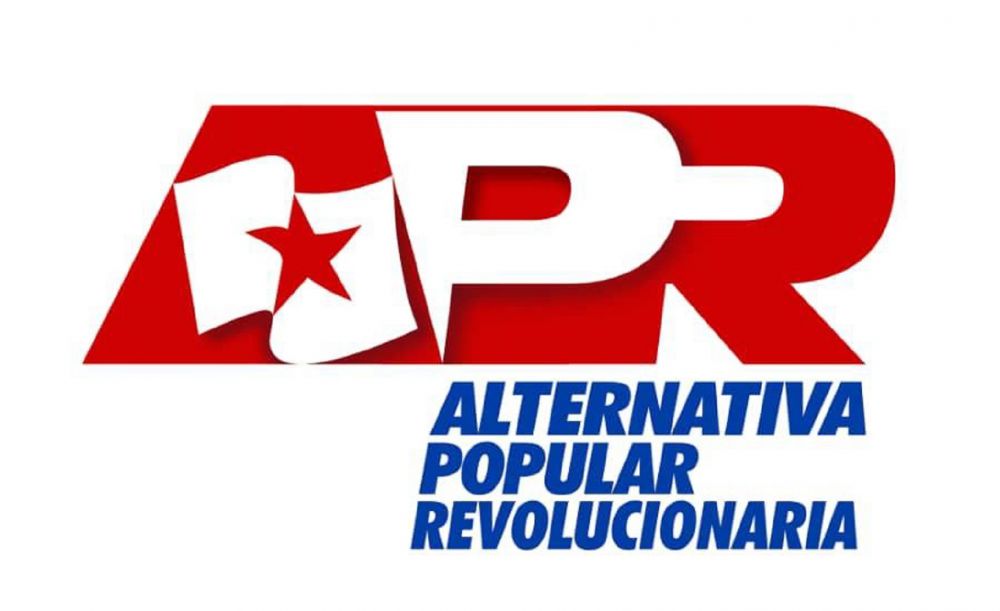 The slate of candidates nominated by Popular Revolutionary Alternative (APR) for the upcoming 6 December Venezuela parliamentary elections were published and disseminated on 15 and 17 September. Although this development might not seem significant at first glance, it is important to note that this represents the culmination of a great joint effort and discussion on the part of the various organisations involved.

Present on the slate are not only leaders of the Communist Party of Venezuela (PCV), but other organisations and movements, such as the Revolutionary Current led by Rafael Uzcátegui; as well as the Revolutionary Tendency of José Tomás Pinto, both recently stripped of their legal status as political parties, which was handed over to groups compliant with the PSUV.

Other organisations involved include Somos Lina (which, in turn, is also involved in a lawsuit to recover its party name), Izquierda Unida, the Movement of Peasant Women, the Autonomous Network of Communards, the MBR-200, the Nucleus of Intellectuals, the Revolutionary Labour Party, among other worker and popular organisations. Together with the IMT's Lucha de Clases, these organisations have been pushing with great force for the deepening of the programmatic debate on political principles, to nominate a pair of candidates that reflect the revolutionary ideals we defend.

However, despite the fact that the APR has succeeded in constituting an electoral platform, the debates and discussions within it have continued. To this we ask, why? The answer is simple. The goal of the Alternative does not lie in elections, but in the construction of a political platform of revolutionary change to overcome the crisis of capitalism. Thus, having partially completed the application process and understanding that the short periods imposed by the CNE forced part of the collective effort to be directed towards the issue of candidacies, it is necessary to continue with the programmatic debate over the political and strategic horizon of the alliance. The programme must offer a comprehensive proposal to the majority of people, and commit the candidates to a united revolutionary policy.

Those of us who have fought to make this debate possible are convinced that the adoption of a revolutionary programme by the APR would allow us to connect with the feelings of working people eager for answers. It would also mark a clear rejection of everything the vast majority repudiate today: the mediocrity of the pro-imperialist right wing, the parasitism of the national bourgeoisie, the machinations of their imperialist masters, and the anti-worker policy of the government that has defrauded the interests of the working people.

In other articles, we have explained the nature of the attacks that the APR has received, but now a greater offensive has been evidenced, which undoubtedly seeks to discredit and intimidate those of us who are part of it.

On the one hand, the censorship of the major public and private media channels limit us to a great extent by not being able to publicise our proposals – since these media outlets have spewed coverage of only the activities and proposals of the right and the party in government. Additionally, the biased media describes us as “movements or sectors critical of the government”. As if that were the only thing that defined us politically, or as if we had not made clear in our public statements – as APR and as autonomous organisations – our profound rejection of the imperialist sanctions illegally imposed on our country and the right-wing that supports them.

Another aspect the media has referenced is our incorporation of José Pinto – who was secretary general of the Tupamaro party, and who is today a candidate on the national slate. The media refers to him as: “a prisoner nominated for National Assembly", casually neglecting to mention the act of solidarity on the part of all the APR organisations to nominate him, while facing a judicial process that has a clear political motive, and despite his being in a rather delicate state of health.

On the other hand, there are the abuses that have led to intimidation, as in the case of comrade Ángel Rodríguez. As the leader of the Living Venezuelan Movement (Movimiento Viviendo Venezolano) and candidate for APR delegate in Circuit (electoral district) Four of Miranda State, he was threatened and attacked physically by strangers on 12 September. This also happened to comrade Sergio Requena, national coordinator of the Productive Workers’ Army (EPO), and candidate in Circuit Two of the Caroní municipality, Bolívar state for the APR. On 14 September, he was the victim of unfair and illegal dismissal by the state company CVG Carbonorca of Ciudad Guayana, an action that violated the LOTTT (labour law) and the Executive Decree of Labour Irremovability, as there was no justification for said dismissal. As such, a campaign of proletarian solidarity and immediate rejection by social media networks was launched, which caused the employers to back down two days later, allowing the return of the comrade to his workplace.

In a similar fashion, on 16 September, comrades Diosman Boadilla and Hiraida Flores, both candidates for the National Assembly of the Popular Revolutionary Alternative in La Guaira state, were detained. This event occurred in La Guaira when state police officers approached these comrades, who were painting a mural with the slogan “Salary equal to the basic cost of living!”, claiming that this constituted a violation of the Anti-Hate Law. This is totally deplorable and shows the terrible decline of the government bureaucracy, which criminalises the right to protest and the fight for the betterment of conditions for working people, distorting the interpretation of the laws. In the end, the incident was not pushed any further and the comrades were released after a couple of hours.

Another, more recent event was the raid on a farm in Achaguas, the management of which is organised by Franklin González, political secretary of the PCV and candidate of the APR in Constituency Two in Apure state, by FAES (Special Forces) officials. They requisitioned the land without a judicial order, commenting to comrade González that “he will remain on the farm calmly producing”, which could be considered a “veiled threat”, as declared by comrades from the PCV, yesterday, 17 September.

All these acts, in one way or another, are part of an offensive that seeks to intimidate and undermine APR candidates. The Marxists strongly reject any type of aggression or threats against these comrades and the APR in general, which can only reflect a violation of the people's political rights and the most elementary democratic guarantees of political participation and organisation.

The truth is that the fight is just beginning. Future attacks could be of a different nature, even conducted through the legal system. Thus, it is of the utmost importance to be cautious and not make it easy for our adversaries, who have been stealthily watching our steps. This is not a simple issue and should certainly not be underestimated.

At this time, our obligations as revolutionaries are to continue fighting the battle for the consolidation of the Popular Revolutionary Alternative, as an honest and resolute political reference point for working people, to forcefully denounce any arbitrary and aggressive actions, fiercely defend our organisations and comrades, and to remember that if recent events have shown anything, it is the power that the working class, peasant, and other popular sectors have when they start to move that makes the difference. For this reason, let us redouble our solidarity as a shield in defence of our political and democratic rights.

For the defence of our political and democratic rights!

For a Popular Revolutionary Alternative!