Share
Tweet
On Tuesday industrial workers, workers from the service sector and from the state sector, together with members of dozens of communal councils, marched through the streets of Barcelona to condemn the killing of two Mitsubishi workers the week before. 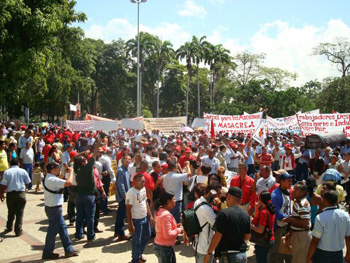 On Tuesday February 3, industrial workers, workers from the service sector and from the state sector, together with members of dozens of communal councils, marched through the streets of Barcelona to condemn the killing of two Mitsubishi workers the week before. Dozens of workers riding their motorbikes opened the march, which started early in the morning from the Mitsubishi plant in the industrial area of Barcelona, Anzoategui. The march then proceeded through avenida Cajigal, Bolivar street, boulevard July 5 and then to the State Governorship. There were slogans of "justice", "punishment for the murderous police", and "the working class united will never be defeated". Afterwards the workers marched to the Palace of Justice to demand the resignation of the judges involved in the attempted eviction of Mitsubishi workers from the plant they had occupied and who ordered the police to attack the workers. 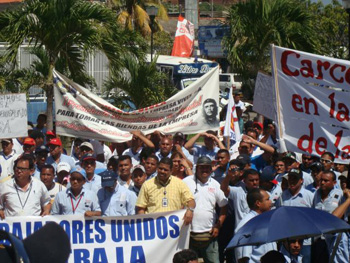 More than 1500 workers marched, united against the criminal aggression on Thursday January 29. They protested against the killing of two workers who, together with their fellow comrades, were resisting the attack by the Mitsubishi bosses, the judges and the police force. Once again the bourgeois state is used against the workers, and once again the workers, with raised fists, shouted with one voice "We are not afraid". The march was widely covered by the national media, including a report on VTV morning news.

Addressing the march were the leaders of Singetram (New Generation Trade Union of Mitsubishi Workers), Richard la Rosa and Felix Martinez who read the demands agreed by the Trade Union Front that was set up on Friday 30th: 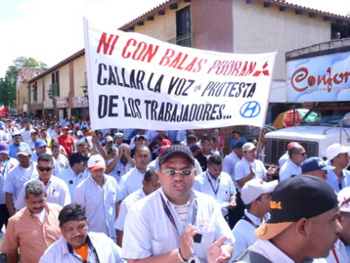 1. Jail for those responsible for the killing of the two workers.

2. For the governor to fulfill his commitment of compensation to the relatives of the victims.

3. Resignation of the general secretary of the governorship, Rafael Vega, of the Commander of PoliAnzoategui, Ulises Flores, and the officers responsible for the massacre at Mitsubishi

4. A guarantee of medical and hospital treatment for the 17 workers injured.

6. Removal of the coordinator of the Labour Ministry in the region, Alí Velez, and the Barcelona and Puerto la Cruz labour inspectors.

7. Immediate reinstatement of the 135 workers of subcontractor Induservi which had been made redundant.

8. Replacement of the whole of management of Mitsubishi

9. Full implementation of the collective agreement, the law on health and safety at work and the Labour Law. 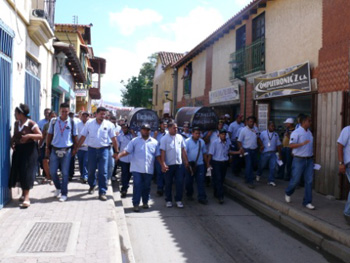 The leader of the movement, comrade Felix Martinez, in a sober but angry speech, addressed his class brothers and sisters: "you are telling the truth. Where are the killers? We are not prepared to accept any more killings by a class which has always held economic power, has held political power, has used the laws to their own benefit, and has constantly attacked us. They want to stop our struggle, because they fear the consciousness that the people have developed, the unity between workers and the communities. Justice is blind in front of the weak, those who have nothing. Enough of this blindness against the poor and the working people!

"We want this blindfold to be removed and for justice to be made to all those who have been killed in this process of change. Many peasants have been killed and the media and the bosses have hidden their deaths. Many comrades have died from the communal councils, leaders who fought for the rights of their communities, assassinated. 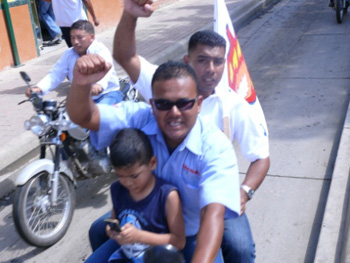 "We had a minute silence. We must use it to unite so that once and for all we fight for justice for those martyrs who have died in the struggle to change this inhuman and unfair system. We demand that the judges responsible, who have put a blindfold on, be removed, Mirna Bass and Rubi, and judge Henry Dietrich who send the judges to implement the eviction. The two judges who actually carried out the order should also be removed.

"But it is also true that there are politicians who have taken sides. Minutes after the clashes and the death of two workers they presented the events as an armed confrontation between workers and the police. These gentlemen have no shame. They have not understood that the workers represent the revolution. The general secretary of the State Governorship, Rafael Vegas, and the commander of the police should also be removed. Listen carefully comrade workers, if the governor of the State of Anzoategui is really committed to this revolution, if he believes in the poor and working people of Anzoategui, who re-elected him, he must honour the death of these two workers by immediately removing these two functionaries. "

And Felix Martinez ended his speech with: "Country, Socialism or Death. We will win!"