Share
Tweet
On Friday, November 21, as part of a protracted conflict, 360 workers of Vivex occupied their factory in the industrial district Los Montones in Barcelona (Anzoategui). The plant makes windscreens for the car industry, and the workers are demanding of President Chavez that he should nationalise it. Now the national government must intervene in a bold manner and nationalise the plant under workers’ control. 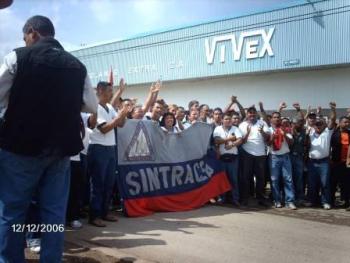 The workers of Vivex are once again entering into struggle. This is a photo from their victory over the company in 2006. Photo by J. Chaparro (Sintracemex)

On Friday, November 21, as part of a protracted conflict, 360 workers of Vivex occupied their factory in the industrial district Los Montones in Barcelona (Anzoategui). The plant makes windscreens for the car industry, and the workers are demanding of President Chavez that he should nationalise it.

The immediate reason for the take over of the factory was the non-payment of the utilidades (profits bonus), which is part of the collective bargaining agreement. According to trade union leaders Jose Angel Hall, Darwin Wilche and Pablo Cumana, "the company argues that it is bankrupt and refuses to pay the 120 days of utilidades that the workers are entitled to". The company told the workers that they would only pay them for 15 days. The workers replied that the company should open the books to determine whether it really had losses or not.

General secretary of Vivex Workers’ Union (Sintravivex) Jean Sabino, reported that the workers had “taken over operational control of the plant, since administrative personnel had left voluntarily”. The trade union leader said that they would continue to work normally, but that they could not guarantee the distribution of the finished products until the legal situation of the company is clarified.

Vivex had already been working at 50% capacity for most of the year, using the lack of access to hard currency to buy raw materials as an excuse. This had had a negative effect on other car plants further down in the production line, particularly Toyota and Mitsubishi (MMC).

The general secretary of MMC workers union, Felix Martinez, rejected the claims that the company is bankrupt. “This year alone, six auto parts companies have closed down and been re-opened by the same owners as “cooperatives”, as a way to break the contracts with the workers”. He also pledged support for Vivex workers and warned MMC not to take similar measures against its own workers. 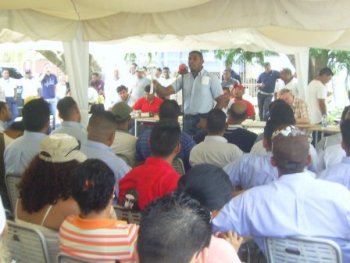 The general secretary of MMC workers union, Felix Martinez, rejected the claims that the company is bankrupt. “This year alone, six auto parts companies have closed down and been re-opened by the same owners as “cooperatives”, as a way to break the contracts with the workers”.

Sintravivex leader Jean Sabino explained that the workers are “demanding the intervention of the state, so that we can continue producing normally, but under workers’ control.”

On November 26, the regional coordinator of the Ministry of Labour Alí Velez, attempted to gain access to the plant together with representatives from the company, in order to hold a mediation meeting. But the workers refused to allow them access and or hold any meetings. Jose Angel Santoyo, one of the workers involved in the take-over explained that: “we refused them entry, because we do not trust Velez, we know he is on the company’s side, and it wouldn’t be the first time that he opens a mediation meeting and then abandons it”. He insisted that they would only talk directly to the Minister of Labour, Roberto Hernandez.

On Monday, December 1, the workers marched to the regional assembly, where they were met by a delegation and invited to address the whole of the regional legislative council on Thursday, November 4. “We have handed in a detailed report for president Chavez” explained a representative of the workers, Jose Angel Hall, “explaining all the abuses of the owners, who participated in the conspiracy at the time of the oil lock out and continue to conspire against the workers now”.

During the demonstration, union general secretary Jean Carlos Sabino mentioned Chavez’s statement to the effect that “companies that break workers’ rights or do not pay them, should be expropriated”, and asked the national government to act immediately. He added that the conflict was no longer merely about labour issues and that the workers have “decided to go beyond that: we are demanding the expropriation of the company, that it should be nationalised and run under workers’ control”.

Under the excuse of “guaranteeing the right to work” of office workers and managerial staff, the company had applied for a court order to allow them to enter the factory. But on Wednesday, 3rd, Vivex workers prevented court employees and police from entering the plant and breaking the pad-locks.

Turmoil in the car industry

The situation in the whole of the car industry is one of turmoil. Last Wednesday, workers at OCI Metalmecánica, in Valencia, Carabobo, also stopped work for half a day in protest at the company’s unilateral breaking of contract agreements. Gustavo Martínez, general secretary of the Sutrafauto union at this plant which makes bodies and fuel tanks mainly for Chrysler, declared that the company had not paid utilidades on November 20, as it was supposed to do. He warned that, unless utilidades were paid by Monday, December 1st, the workers would paralyse production. 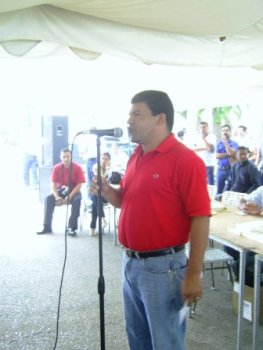 Sintraford union representative Juan Aguilar declared that, unless the the company paid what they agreed to, the union would declare a strike.

Workers at the Toyota plant in Cumaná, Sucre, also protested against the unilateral decision of the company to send the worker of one of the shifts to early, unpaid, holidays. Argenis Vasquez, one of the leaders of the union Sintratoyota, argued that the measure had nothing to do with the problems at Vivex, as the company claimed, but rather with overproduction: “the parking lot of the factory is full of assembled cars and the company is attempting to reduce stock and make the workers pay”. Vasquez also explained that the plant manager had prevented the trade union adviser from entering the factory without giving any reason. “We cannot allow this to happen”, he said. In the end, Toyota agreed not to bring the holidays forward.

At the Ford plant in Valencia, the workers are also protesting against the fact that the company is breaking the collective agreement by not allowing workers to add their free days to their holidays. Sintraford union representative Juan Aguilar declared on December 3rd that, unless the issue was resolved immediately, they would declare a strike.

The conflicts in the car industry in Venezuela take place against the background of the “Plan Venezuela Movil”, an agreement between the government and the auto companies that was introduced in June 2005. The aim of the plan was to develop the Venezuelan car industry (which is mainly based in assembling parts produced elsewhere), to allow consumers access to purchase cars at a reasonable price and with good financing terms and thus create additional jobs for workers. The plan consisted in tax exemptions in the sale of cars and tax exmptions for those companies that committed themselves to increasing the percentage of nationally produced parts for certain models covered by the plan.

Venezuela Movil has actually been a complete disaster, as the trade union representatives have explained. Despite the increased demand for cars in Venezuela, the companies have consistently refused to invest in additional capacity. Only about 10% of the cars sold in Venezuela in 2007 were made in Venezuela, the rest were imported or a majority of components for them had been imported. Trade union leaders in the sector also denounced that despite receiving some 600,000 BsF in tax breaks the companies are constantly breaking collective bargaining agreements.

Eduardo Samán, of the tax revenue service SENIAT, has on a number of occasions denounced examples of the companies flouting the terms of the Venezuela Movil agreement by selling cars at higher prices, and is on the record saying that “only by incorporating workers’ representatives to control the accounts” can this be solved.

This shows the parasitical nature of capitalism. As UNT leader Ruben Linares pointed out, a plan to renew the vehicles used for public transport could generate 35,000 new jobs in the sector.

Plan Venezuela Movil was one flagship projects of the reformists in Chávez government, promoting the idea that a mixed economy with a certain level of state intervention was the way forward. Collaboration with private capitalists to attempt to reactivate the economy, create jobs, etc has been tried … and has quite clearly failed. It is now time to move towards the nationalisation of the whole of the car industry, to put it under democratic workers’ control in order to supply cars to the market and also to solve the serious problems of public transport in the country. And what applies to the car industry could be said for the rest of privately owned sectors of the Venezuelan economy. 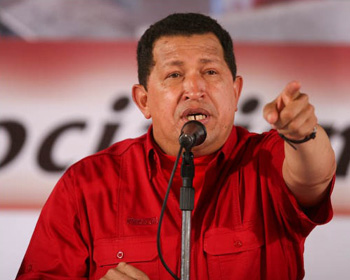 President Chavez appealed on Monday to the workers to take over those factories where there are problems with payment of wages and benefits. The workers of Vivex have taken up the appeal. Photo by Inmigrante a media jornada on flickr.

For months the workers in the industry have been organising national meetings to coordinate their actions, including a very important gathering of 600 workers in June last year, which was addressed by Alan Woods from the International Marxist Tendency, among others. Alan Woods stressed the role of the workers’ initiative in the struggle for socialism: “Here in Venezuela, far too many people are looking to the top waiting for president Chávez to solve their problems... it is the people and the workers who have to push the revolution forward from below, through the taking over and occupation of factories in order to expropriate the capitalists”, he said.

Now the workers at Vivex have taken the first step, forced by the provocations of the employers. For their struggle to be successful, it needs to spread to the other car plants, where conditions are ripe. The workers must also frame their conflict, as they are correctly doing, not merely as a trade union conflict for wages and conditions, which it is, but also as part of the struggle between revolution and counter-revolution. In this way they can get the support of the whole of the population, as well as that of the working class as a whole.

President Chavez appealed on Monday to the workers to take over those factories where there are problems with payment of wages and benefits. The workers of Vivex have taken up the appeal. Now the national government must intervene in a bold manner and nationalise the plant under workers’ control.

President Chávez has now launched a campaign to amend the constitution to allow him to stand for a further term of office. This is another important battle, but one that can only be won by moving decisively towards socialism.

Messages of solidarity to the Vivex workers can be sent to: