Share
Tweet
A workers' demonstration of close to one thousand marched through Caracas against economic sabotage and for the nationalisation of closed down factories and those working below capacity. After the killing of workers at Mitsubishi, one of the main demands was for the real culprits to be brought to justice.

"No to impunity! Factory closed, factory occupied!" These were some of the slogans of nearly 1000 workers that took part in a march from Plaza Morelos to the National Assembly in Caracas. The aim of the march was to demand the trial and punishment of those responsible for the killing of workers Pedro Suárez and Javier Marcano, from Mitsubishi and Macusa, on January 29, and the killing of the three leading UNT-Aragua members, and members of the Left Socialist Unity (USI), Luis Hernandez, Richard Gallardo and Carlos Requena on November 27 in Aragua. 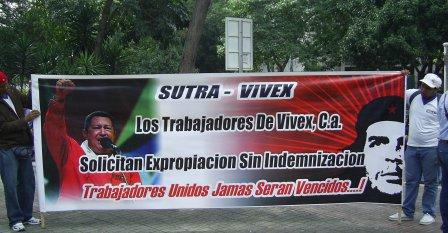 Workers from MMC Automotriz (Mitsubishi), the occupied auto parts factory Vivex, Unicasa, the factory under workers' control Inveval, the occupied factories fighting for nationalisation Inaf and Gotcha, from the Aragua UNT, from Sanitarios Maracay, Freteco, and many others marched on the streets of Caracas, down Avenida Universidad. The workers of MMC Automotriz distributed more than 500 copies of a CD containing a video they have edited to denounce the killings on January 29, and to expose the conspiracy of the police and the management of the company to kill them and crush their struggle. Members of the metropolitan police guarded the march which took place without incidents.

The workers demonstrated to demand that all those responsible for these crimes should be brought to justice. The UNT-Aragua is not convinced that the person accused of the killing of the three trade union leaders there is the one who actually carried out the crime. The workers demanded from the State Prosecutor and from the National Assembly an end to sicariato (politically motivated killings). They also called for the creation of a commission of the National Assembly against impunity and sicariato which has cost the lives of workers, peasants and revolutionary leaders.

In the last few weeks these crimes against the people and the workers have increased, with the aim of terrorising and destroying the organisations of the people, particularly the peasants. These fascist attacks continue: for instance the comrades of MMC Automotriz are being threatened and harassed by the Anzoategui police, to the point where, for fear of being identified, they no longer wear their blue overalls outside the factory.

Obviously, this campaign of harassment was increased on the eve of the constitutional referendum on February 15, which ended in a victory for the forces of the revolution. Since the beginning of the year we have seen a sharpening of the class struggle, with the ruling class adopting an increasingly aggressive attitude towards the workers, as they are unable to stop the growing strength of their organisation.

The situation in Vivex and MMC Automotriz

After 90 days of struggle, the workers at Vivex continue occupying the factory demanding its expropriation. Their morale is high. They are currently holding meetings with the Presidency of the Republic, demanding from its civil servants that they should follow the line announced by President Chavez who said that any factories where the bosses attack workers' rights and violate the law should be expropriated. They are already discussing the way to get the factory producing again and to establish a factory council, a workers' government in the factory. 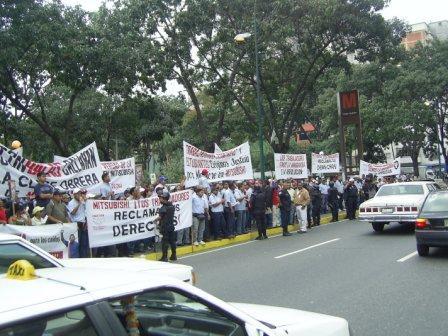 Currently, the workers of Mitsubishi are demanding from MMC Automotriz a reply to the demands that led them to take over the factory, so that they can restart production again. Their main demands are for the reinstatement of subcontracted Induservis workers who should be hired directly by MMC; the full payment of wages and benefits; compensation payment for the families of the workers killed; and the removal of those managers who participated in the police attack against the workers.

The negotiations have taken place in the Ministry of Labour, with the presence of the former Minister of Labour, Roberto Hernandez and will continue with the newly appointed Maria Cristina Iglesias. It should be remembered that at the last Cabinet Meeting on March 3 (where he signed the nationalisation of Cargill and announced the expropriation of Polar), president Chávez asked the new Minister of Labour to investigate the situation at the auto assembly plants.

Meanwhile, the MMC plant in Anzoategui remains occupied by the workers who are preparing a regional trade union meeting on March 28, 29, with the aim of making this a first step towards the rebuilding of the revolutionary trade union movement at national level, so that the working class plays its rightful place in the struggle for socialist revolution in Venezuela.

After passing through the Prosecutor's Office, where a commission of the workers was received, the march went to the National Assembly, where they were met by a commission of deputies, headed by PSUV vice-president and Member of Parliament Carlos Escarrá. The group of deputies listened to the workers who gathered in an assembly in front of the national assembly. Felix Martinez, from the MMC Automotriz workers' union Singetram and Emilio Bastidas from the Aragua UNT handed in a statement, asking for the setting up of a commission of the National Assembly against impunity. 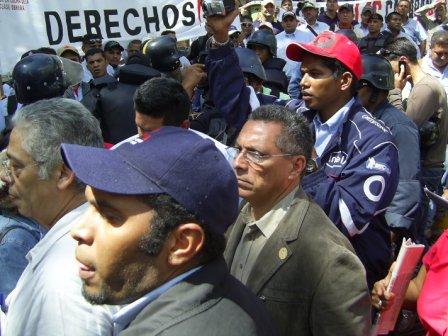 Workers from Polar (a company now threatened with expropriation by Chavez) and Inveval also spoke explaining their points of view. Nelson Rodriguez from Inveval explained that "there are many factories occupied and in struggle, and the national government should intervene, as president Chavez said, and if an employer breaks the law repeatedly he should be expropriated", he said, referring to the situation of the workers at Gotcha, Inaf, Vivex and many others.

"The only solution will be if the means of production are in the hands of the workers and the communities. We the workers are here to put ourselves at the head of this revolution", Nelson said, addressing the workers and deputies.

Carlos Escarrá himself agreed to set up the commission against impunity and pointed out that he considered that the workers had a key role to play in the building of socialism, and that the PSUV parliamentary group would put at the disposal of the workers any means necessary to make this possible.

After being received by the deputies, Felix Martinez, addressed the workers present to stress the need for working class unity so that they can carry out the demands of the workers in the revolution: "that means occupying and putting the factories to work in order to fight against the sabotage of the bosses". "There is an onslaught of the ruling class, not only against the workers in the auto industry, but also against the revolution in general as a result of the impact of the world crisis of capitalism on Venezuela," he said. And he added that, "trade union leaders must be elected from below. They cannot be false leaders, elected by no-one but claiming to speak in the name of the workers". Felix ended his speech by shouting slogans in favour of the working class struggle, the president of the Republic and for "Homeland, Socialism or Death", the revolution's war cry.

Many small sectarian groups were present on the march which had taken place on the initiative of MMC and Vivex workers. In one of the interventions, at the beginning of the march, where most trade unionists and fighters present gave greetings, the spokesperson of one of these grouplets (LST) accused president Chávez of being directly responsible for the death of the workers. This caused shock and anger amongst the workers. Also present were some deputies of the group "Dissidents for NO", who have joined the Opposition in asking for a vote against the constitutional amendment. The trade union leader Orlando Chirino, also part of the "Dissidents for NO" group, which have been widely publicised by the reactionary media, appeared in front of the National Assembly as the workers were talking to the deputies. This caused indignation amongst the workers present who booed him shouting "Traitors out!" and "Chirino is a sell out!"

Sectarians always play a pernicious role in the revolutionary struggle. They are like a King Midas in reverse, transforming everything they touch into rubbish. They attempt to separate vanguard workers and youth from the rest of the working class which participates in the ranks of the Bolivarian movement led by Chavez, and make it easier for the reformist bureaucracy to isolate the struggle of workers and the people which threatens the interests of the reformists. Finally, they help the ruling class and the reformists to isolate the vanguard from the masses.

As Felix Martinez said at the end of the march: "We were accused by elements in the Anzoategui governorship of being ultra-left and of being against the President of the Republic, with the aim of isolating us. Nothing could be further from the truth: as a matter of fact we participated in the campaign for a YES vote, and had it not been for our mobilisation in the last days before the referendum, the amendment would have been lost in Anzoategui."

The struggle's next step: Trade Union Conference in Barcelona on March 28 and 29

After the success of the mobilisation, the MMC Automotriz and Vivex workers will continue to organise the working class and to struggle for the defence of their rights and for socialist revolution. On the weekend of March 28 and 29, they are organising a regional trade union conference in Barcelona, in order to unify the struggle of the working class and go beyond the purely bread and butter reformist trade unionism of the current so-called national coordinators of the UNT. Their aim is to give the trade union movement the same revolutionary character it has in MMC and Vivex: to struggle against economic sabotage on the part of the bosses it is necessary to organise the occupation of factories and workers' control of production. This is the only road to socialism. The words of President Chávez must be taken up and put into action, as the workers in the rice processing plants did when president Chávez put them under state intervention. This is the task of a unified revolutionary trade union movement in Venezuela.