A group of ANC veterans led by anti-apartheid stalwart Ronnie Kasrils are urging disgruntled ANC voters, rather than staying home, to either spoil their ballots at the May 7 elections or tactically vote for some of the small opposition parties. They are unhappy with their political home, but don’t have an alternative. The veterans are urging voters to spoil their paper rather than abstain because, in their view, this will send a clear message to the politicians. 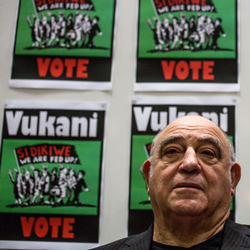 Yesterday, Kasrils and other veterans of the movement launched a “Vote No!” campaign in Johannesburg. Speaking prior to the launch, Kasrils said:

“Given the state of politics in South Africa today, with a lot of people feeling they are just so fed up . . . , we are saying at least go and you can spoil that ballot paper(…)

“It is like toyi-toying on paper,” he said referring to the dance usually performed at protest gatherings or marches.

“You spoil that ballot paper, it does say something,” he said.

At the launch of the campaign, he reiterated this sentiment:

“Corruption, cronyism, control over the public debate have spread like a cancer through the ANC and, because of this, through government and state institutions. This has undermined the often substantial advances made over the past 20 years with the result that millions of people now consider themselves ‘outsiders’, facing poverty, lack of jobs and poor education.”

Naturally, the ANC was not very happy. Former minister in the office of President Mbeki, Essop Pahad wrote an open letter to Kasrils, saying:

“As a comrade and friend I must emphasise that I categorically and emphatically disagree with your approach in the so-called Sidikiwe! Vukani! Vote no campaign.

This is in essence a desperate anti-ANC campaign in favour of the opposition parties. Whatever the differences we have with the ANC or even serious concerns about developments in the ANC and the government, I do not believe that a hostile anti-ANC campaign will contribute to assisting the movement to correct the mistakes and take steps to fight corruption, factionalism and disunity in the ANC and the Alliance.”

But others were not so kind. ANC secretary general, Gwede Mantashe, in his usually pompous style and disgusting manner, launched personal attacks against Kasrils by blaming him for the neglect of the intelligence services which is supposed to have led to the Marikana massacre! The massacre was not the result of “weak intelligence”, but was caused by a Capitalist state machine protecting the interests of the Capitalists.

But this campaign is yet another indicator that after 20 years of Bourgeois Democracy there is a growing sense of frustration building up in society. The class struggle has increased massively over the last period. This has exposed deep fault lines in South African society as a whole, but in the former liberation movements particularly.

The Tripartite Alliance is deeply divided. Increasingly this division shows more and more to be on class lines. In the last analysis it is a reflection of a struggle of class forces.

But the reaction from the political parties across the board in “protecting the right to vote”, also link up with something more fundamental: the Bourgeois Democratic setup. This was expressed more clearly by the Institute for Race Relations (IRR) who prescribed that voting be compulsory as a panacea for the ills of society. Of course it is not – just ask in Greece where voting is compulsory.

A boycott campaign will of course, not change anything. But it should be seen as a symptom of a growing questioning of Bourgeois Democracy itself in South Africa. In this process a whole series of quack theories and false solutions will be posed only to be discarded as useless for the cause. The only real solution to end the horrors of Capitalism is to build a genuine Marxist tendency inside the mass organisations for the sole purpose of fighting for Socialism.