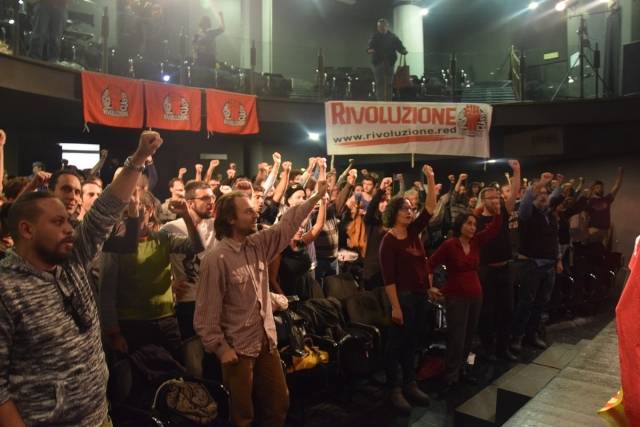 On 28 October, over 300 people attended the Red Night of the Revolution: a celebration of the 100th anniversary of the October Revolution, organised in Naples by Sinistra Classe Rivoluzione (SCR), the Italian section of the International Marxist Tendency. SCR wagered that the Red Night would become one of the main events commemorating the Russian Revolution in Italy: we can say now that we won the bet!

Two coaches came from Milan and Bologna to Naples, packed with comrades from the northern regions of Italy. Comrades arrived in cars and trains from other regions as well. The city was flooded with leaflets, and posters plastered the walls.

The main part of the event took place in the beautiful location of the Teatro Gallerio Toledo, a theatre in the centre of Naples.

Antonio Erpice, from the Naples branch of SCR, welcomed all the youth and workers who attended the meeting, emphasising that the Russian Revolution was not merely a historic event, but it is still relevant today as an inspiring example in the daily struggle of the masses. It was not a coup d’etat, but a mass movement of the toiling masses. He ended his contribution saying that it was an honour for the comrades in Naples to host this great event. 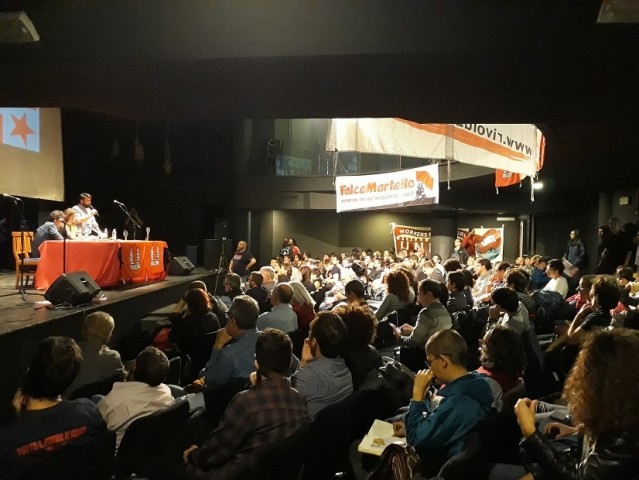 Crowd assembled for the Red Night / Image: own work

Claudio Bellotti, editor of the recently published full Italian edition of Stalin by Leon Trotsky, started by saying that to celebrate the Russian Revolution meant to re-discover its real heritage.

“Both reformists and the bourgeoisie at an international level have always sought to portray the Russian Revolution as the starting point of a totalitarian regime. The work that we have done to publish the new edition of Stalin by Trotsky aims to sweep away all this propaganda. The full edition of Stalin, with previously unpublished material written by Trotsky, restored and published for the first time, was printed last year in English and in 2017 has already been published in Italian and Portuguese. A Spanish edition is about to come out in the next few weeks. We cannot talk about socialism today if we don’t have a clear idea of what happened in the Soviet Union and why the revolution degenerated.”

Claudio spoke about the river of blood that divides Marxism from Stalin, when a whole generation of Bolsheviks was murdered. “The whole experience of the Russian Revolution highlights one question that is fundamental for us, the role of the subjective factor – the revolutionary leadership – for the seizure of power and for the defence of workers’ democracy. Stalin by Leon Trotsky helps to understand how to build this subjective factor.”

Vidal Aragones, from Cornellà en Comù, Catalonia, spoke next. The audience was very pleased to hear him, given the confusion spread by the Italian media about the events in Catalonia during the last months. The IMT stood firm on the principles of Marxism and fought against this media campaign. 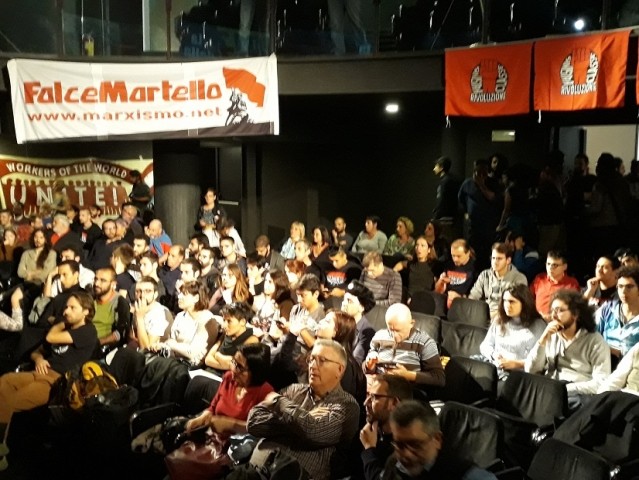 Vidal gave an overview of the historical roots of the oppression of Catalonia, but also of the traditions of struggle of the Catalan proletariat, which always played a vanguard role in the revolutionary movement: after the October Revolution, during the Spanish Civil War and in the 1970s. He then explained the clash between the Generalitat and the Madrid government and the sharp shift to the left in the movement for independence in Catalonia, forced by the masses.

The struggle for democratic rights is linked to the class interests of the workers. By breaking the very foundations of the 1978 regime, the Catalan movement is opening a major crisis in the Spanish state. This is an act of internationalist assistance that the Catalan people could give to their Spanish brothers and sisters. “During these weeks a question arose: Is it possible to build a new state at the very heart of the European Union without breaking with capitalism? Victory in a referendum, as Syriza’s example in Greece shows, does not mean that national sovereignty is conquered.”

Vidal summed up explaining the need to take the same attitude of the Bolsheviks towards the national question. This is the only way we can link the democratic tasks to the socialist ones.

One of the most moving moments of the event was a message from Esteban Volkov, Trotsky’s grandson. “Capitalism and Stalinism tried always to undermine the very idea of Marxism. Trotsky gave the analytical tools to understand the role of Stalinism. I thank the IMT and especially the work of Alan Woods, who have given new life to one of Trotsky’s masterpieces, Stalin.”

He ended his message with the last words of Trotsky’s Testament: “Life is beautiful. Let the future generations cleanse it of all evil, oppression, and violence and enjoy it to the full.”

Alessandro Giardiello, of the SCR national leadership, connected the 1917 Revolution with the need for a revolution today, given the desperate situation produced by the capitalist crisis, particularly in Italy. It is enough to look at the situation of ILVA, the biggest steel plant in Europe, which, after having pocketed billions of euros by the state, now announces more than 4000 layoffs.

We need a revolution, and yet the situation in the reformist left is appalling. A general election is approaching in spring 2018 and all the remnants of the reformist left are trying to ‘unite’ in an electoral front, which reproduces the same mistakes of the last 10 years. They have no anti-capitalist programme, always looking for shelter under the wing of the Democratic Party, and in so doing, they have no chance to be an alternative for the masses.

SCR is going to collect signatures in order to stand candidates in the next election with a revolutionary anti-capitalist front, along with other organisations that agree on a common programme. “But it is not enough to vote for our candidates, we ask you to organise with us.” said Alessandro.

The last speaker was Alan Woods. Alan began by saying that “tonight we celebrate the most important event in history. Even if nowadays is not so fashionable to say this, because of all the slanders and lies of the media about the Russian Revolution. They try to portray the October Revolution as a tragedy. But quite the contrary: if the Bolsheviks failed to take power, in Russia there would have been a ruthless dictatorship and fascism, led by Kornilov. 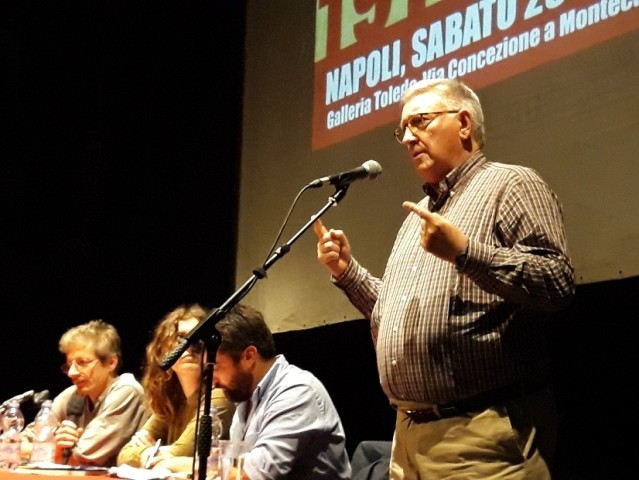 “Thanks to their planned economy and the abolition of the anarchy of the market, the USSR made colossal advances. In the 1970s they had more graduates and engineers than any other country in the world. Then, it is true, the USSR collapsed. That collapse has nothing to do with Leninism, but much to do with Stalinism.

“After the October Revolution, the Bolsheviks tried to expand the revolution to other countries. No Bolshevik believed that it would be possible to build socialism in one country. But in Germany, Italy, Hungary the working-class was defeated.

“The German Revolution was led by the social democrats that had no faith in the working-class, like today’s reformists. The workers paid a terrible price for this defeat, with the rise of Nazism.

“The ruling class says that Stalinism is the same as Leninism. It is an appalling slander to which is easy to reply. Why was it that Stalin, in order to consolidate his power, had to slaughter all the Bolshevik leaders?

“The fact that Trotsky started to write the biography of Stalin sped up the plans by the latter to assassinate him.

“When Mercader, the GPU agent, killed Trotsky, Stalin thought the the struggle was over, but he never understood that you can kill a man but you cannot kill an idea when its time has come.

“One hundred years after the Russian revolution, WE ARE STILL HERE!” 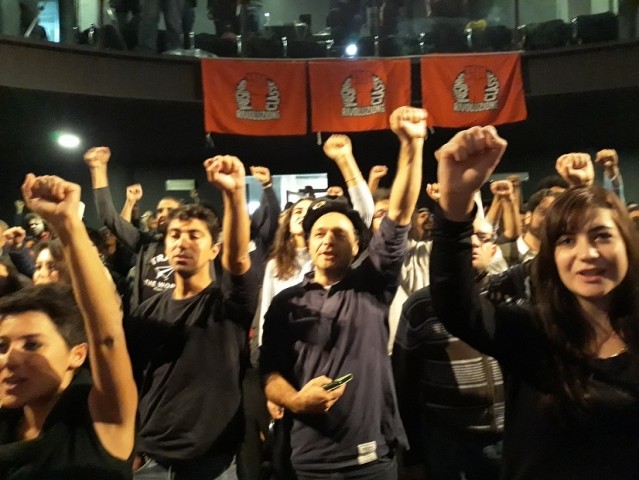 The political event ended on a note of great enthusiasm and with a powerful rendition of the Internationale and Bandiera rossa.

The night continued with a militant concert of the Banda Popolare dell’Emilia Rossa, which combined traditional songs of the communist and the workers’ movement with their own songs about today’s workers’ and antifascist struggles. 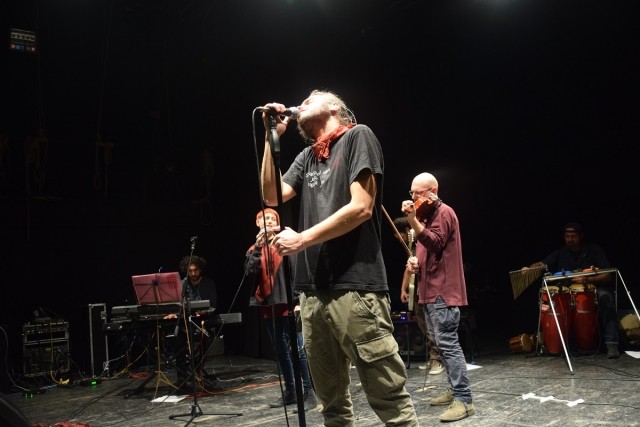 After midnight, we moved to a social centre, where we followed a reading of poems of Mayakovsky, watched the Italian premiere of the documentary “Trotsky, the life of a revolutionary” and danced for the rest of the night, until 4am, when the comrades who came by coach took the route back up north. Before leaving, hugs and a firm commitment to continue the struggle were exchanged by all participants. The coming 12 months will be a decisive period for the building of the IMT in Italy.