The masses are striking back with anger against the regime of King Mohamed VI. 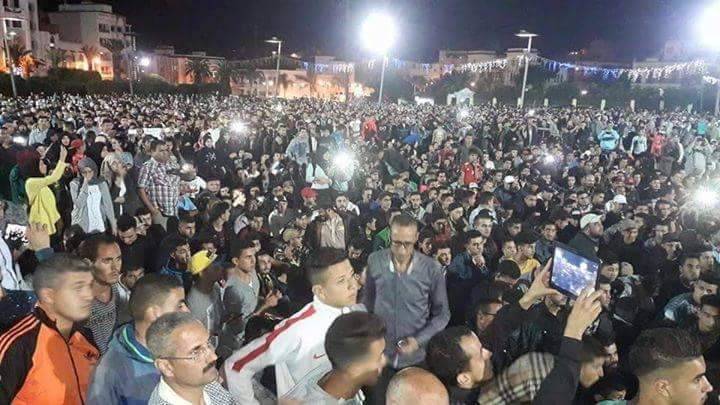 Tens of thousands of outraged Moroccans took to the streets this weekend after a fisher vendor in Al-Hoceima was crushed to death inside a garbage truck as he was trying to recover fish which had been confiscated by the local police. Mouhcine Fikri’s fish were confiscated on Friday as local authorities who were enforcing a ban on swordfish sales in this season. Witnesses to the incident claim that, the police deliberately activated the compression part of the garbage truck, when Mouhcine Fikri jumped inside to recover his fish.

Anger in the streets of Morocco after a young fish seller was crushed to death by a garbage truck. #طحن_مو pic.twitter.com/Xgfnm4LLZ4

Images of the crushed body inside the truck were posted on the social media and sparked a frenzy of indignant reactions. Two Arab hashtags #طحن_مو  (« Grind him ») and #كلنا_محسن_فكري « We are all Mouhcine Fikri » are going viral on the web. Central to the anger is the ‘Hogra’, an Arabic term referring to the feeling of abuse and injustice at the hands of the state. This is a powerful feeling which connects with the daily experience lived by many poor people. It is the reality of contempt, exploitation and oppression by the hands of the bosses, the landlords, the local and regional officials, the (head)teachers, the religious leaders, the police, the politicians and the men and women of the King. In other words: by the regime itself. This feeling is enhanced by high unemployment, low wages and high prices. Many people identify with the fate of the fish vendor. As one demonstrator declared: ‘Everybody feels crushed by the garbage truck here’. The garbage truck has become a metaphor for the oppressive and exploitative system.  One of the slogans in the demonstrations was: ‘Mohcine was murdered, Makhzen is to blame’. The Makhzen is the word used to describe the royal state institutions, the absolute monarchy controlling Moroccan society and wealth. The people understand that the behaviour of local policemen is more widely linked to the state apparatus and the economic system.

Social media activists and the demonstrators do not believe the official thesis of the suicide of Mouhcine Fikri or his accidental death. They are convinced he was deliberately killed by the police and demand they be punished. The police authorities of course rejected those accusations.

Mass demonstrations were held, not only in the Northern city of Al-Hoceima, but also in Casablanca, Rabat and many other places. They were largely spontaneous but the activists of the old 20F movement have been participating in their organisation. These demonstrations are probably the largest seen in the kingdom since the wave of protests following the Arab Spring in 2011. In the Northern Rif region, the demonstrations have taken an almost insurrectionary character and a general strike has been called throughout the region today. This area has historically always been a hotbed of revolts and dissent. The Rif war in the early 20’s led by the legendary Abdel Krim against the colonial powers of Spain and France was the first mass anti-imperialist revolt in history. This spirit is still alive. But the victory against the oppression of the Moroccan state can only be won in a joint battle with the rest of the working class and youth in the country. Separatism as advocated by some political forces in the Rif will only weaken the revolutionary movement against the regime.

The death of Mohcine Fikri and the mass indignation it has sparked all over Morocco is reminiscent of the self-immolation of the poor market vendor Mohamed Bouazizi in Tunisia in December 2010. This tragic event became the initial spark to the Arab revolution.  It is not the first ‘incident’ of this type this year in Morocco. Tens of people who suffered brutal and humiliating behaviour by the authorities have killed themselves in front of official buildings or on market places. This wave of indignant mass protests comes as no surprise. All the socially and politically combustible material was already present and waiting for an incident, a spark to set it in motion. Nowhere in the Middle East has the situation changed for the better since the beginning of the Arab revolutions. This year alone Tunisia witnessed two mass riots as a result of the brutal austerity policy. Egypt is teetering on the brink of a new social explosion as it sinks deeper and deeper into the spiral of recession, attacks on the living standards and repression. The days of the new pharaoh, Abdul Fatah al-Sisi are counted. In order to succeed the new movements cannot limit themselves to changing one president or king by another. They must aim at rooting out the old state apparatus and the capitalist system and to replace them by a democratic workers’ state and a planned economy.

The authorities live in fear of a repetition of the stormy events during the Arab revolution. The Moroccan regime withstood the hurricane of the revolution thanks to a combination of material concessions, cosmetic reforms and the corruption of the leaders of the unions and the protest movement. This gave the impression stability under the ‘wise and progressive guidance’ of the King. It fed the idea of the ‘Moroccan exception’ in the Middle East.  They thought they had tamed the masses. The Moroccan Marxists have always argued the opposite. The last days have confirmed our analysis against all the defeatist and demoralising perspectives of all left tendencies in the country.

The King, Mohamed VI, has now dispatched his representative to visit the victim’s family and offer his royal condolences.  He has also promised an investigation. The ministry of the interior and of justice did the same. This is not the first time the authorities promise ‘thorough and transparent investigations’. But these never lead to anything. The state is deceitful. All officials are desperately attempting to project an image of concerned personalities and institutions. By doing so the regime is activating the mechanisms designed to protect it from wider questioning. If necessary, some police officers will be sacrificed to try to calm the angry masses.  The regime will try to lean on the leaders of the discredited parties and also on the reformist lefts and the Islamists of Al Adl Wal Ihssane to derail the movement. But nothing fundamentally will change. It will only strengthen the understanding of the need a real revolutionary party to carry through the only revolution which will satisfy the demands of the masses: a socialist revolution. A new stage in the Moroccan revolution has opened. The masses in Morocco are retying the knot of the 2011 events when ‘the people demanded the end of the regime’.

Down with the murderous and oppressive regime!

Long live the socialist revolution in Morocco and the whole region!

Join the Moroccan section of the IMT!