Britain
Share
Tweet
Last week industrial action began at the Lindsey refinery in Lincolnshire. Swiftly the strikes spread to Grangemouth in Scotland, Wilton in Cleveland and all over the country. By Friday 3,000 skilled workers were out from 11 plants. On Monday thousands more joined the action. As a news item, the dispute has been highlighted by pictures of workers carrying placards with the slogan, ‘British jobs for British workers.’ However, most of the workers on strike are aware that their enemy is the employer. That, after all, is who they are striking against.

In the last week of January 2009, industrial action began at the Lindsey refinery in Lincolnshire. Swiftly the strikes spread to Grangemouth in Scotland, Wilton in Cleveland and all over the country. By Friday January 30th 3,000 skilled workers were out from 11 plants. On Monday February 2nd thousands more joined the action. Sellafield workers at the nuclear reprocessing plant in Cumbria, Didcot power station, Longannet, Staythorpe, Milford Haven, Selby, Warrington and Aberthaw have all walked out. The Times headlined it as the “Dawn of new age of industrial unrest.” This is a well-organised, co-ordinated movement, which is unofficial and completely illegal under UK anti trade union laws. 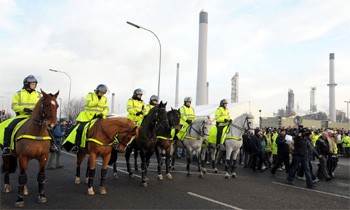 The movement has been part of a wave of protest that has been sweeping Europe since the latter part of 2008. Greece has been convulsed by action by school students and a sequence of general strikes. Riots and demonstrations have occurred in almost all East European countries – in Latvia, Ukraine and Hungary, to name just three countries where workers’ anger has exploded in 2009. In Iceland the government has just been forced to resign. And in France millions took part in a general strike against cuts and austerity on January 29th.

The basis of this mood of anger is the rising awareness of the way the consequences of the current crisis is likely to impact on the jobs and conditions of ordinary working class people. In Britain it is no different. As we have pointed out elsewhere, this consciousness necessarily develops unevenly at first.

As a news item, the dispute has been highlighted by pictures of workers carrying placards with the slogan, ‘British jobs for British workers.’ This, of course is the very phrase Gordon Brown used in 2007, purloined from the fascist BNP. We condemned the slogan as racist at the time. It remains a racist slogan. We do not support workers displaying these placards. We are for the unity of all workers against the strokes and manoeuvres of the bosses

Most of the workers on strike are aware that their enemy is the employer, IREM in the case of the Lindsey refinery. That, after all, is who they are striking against. One striker is quoted in the Times (30.01.09), “The argument is not against foreign workers, it’s against foreign companies discriminating against British labour,” he said. “This is a fight for work. It is a fight for the right to work in our own country. It is not a racist argument at all.”

But it is also true that the BNP and other fascists are creeping around the fringes of this action. They should be told very firmly to get lost. In some places they have indeed been kicked off the picket line. Fascists have never been friends of the labour movement.

Gordon Brown has now denounced the workers’ action. In doing so he has to in effect repudiate his own racist dog whistle slogan. ‘British jobs for British workers’ is not just divisive. It quite simply can’t be delivered under the rules of the European Union, which commits all member states to ‘free movement of labour’.

Does that mean the workers’ action is misguided and futile? Not at all. The situation at Lindsey, a situation replicated all over the country, is that construction work around these sites is subcontracted out. Lindsey is owned by the US firm Total, which contracts engineering work out to Jacobs, which in turn has hired IREM, who employs Italian and Portuguese labour. The reason is not far to seek. Average monthly wages in the construction sector in the UK are £2,160; in Italy they are £1,386; and in Portugal just £614 a month. These foreign workers are being accommodated in barge hostels moored in the North Sea, described as ‘Soviet style’ in standard.

The British workers are fighting to maintain wages and conditions in the industry. Though we don’t support the slogan, ‘British jobs for British workers,’ we support their fight. British workers are in effect being excluded from consideration for the job through the operation of the subcontracting mechanism. IREM will bring in their entire team to do the job. The job vacancies will not be advertised in Britain. In the relentless search to drive wages to the bottom, British workers are effectively being discriminated against by IREM. If that is not illegal, it ought to be. 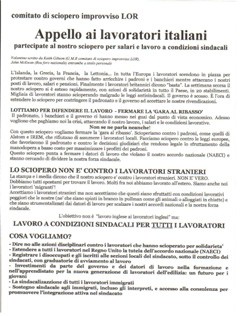 Leaflet in Italian by trade union activists, circulated in Lincolnshire. Click here to open the PDF.


There is a ruling class offensive against workers taking place through the institutions of the European Union. The European Court of Justice has issued a number of hostile judgements in interpreting the application of the Posted Workers’ Directive (which deals with workers’ conditions when working abroad) as narrowly as possible. Socialist Appeal will return to this bosses’ offensive later, as it has important implications for all workers within the EU. Basically the Court has given the green light to employers to shop around the European labour market in order to drive down living standards throughout the continent.

Through the morass of subcontracts they hope we cannot impose the responsibility bosses have to honour standards and conditions that have been collectively agreed. They aim to divide us in order to rule us. Our response must be to maintain standards by fighting for the rate for the job for all workers, British or foreign.

One of the ironies of the situation is that the repressive Tory anti trade union laws have been kept on the statute book by New Labour. As a result the action is unofficial and Brown and co. can’t appeal to the naturally cautious trade union leaders to rein the movement in.

For their part the trade union tops are furious with New Labour for their supine acceptance of the EU-wide bosses’ offensive until it has blown up in their faces. The unions have been raising the dangers posed by the Posted Workers’ Directive for years, and got an agreement from the government in 2004 at Warwick to legislate to defend workers’ conditions. Unfortunately New Labour was too busy grovelling to the bosses to do this.

Paul Kenny, general secretary of the GMB union, comments, “Understandably UK workers are angry that they are excluded from jobs simply because they are British. The Labour government has been made aware of this issue and had promised to sort it out, but they have failed to keep their promise.”

The workers’ action is actually aimed at bosses who use the thickets of subcontracts to tear up national collective agreements that British trade unions have campaigned for decades for to maintain standards in the construction industry. The workers are involved in a just struggle that should be supported. It will only succeed if the movement is based upon the principle of working class unity.