Balkans
Share
Tweet
On Saturday, November 17, a massive demonstration of 70,000 workers and youth took place in Ljubljana, the capital of Slovenia. The workers are fed up with low wages, high prices, cuts in services and privatisation. They have had a taste of capitalism and clearly don’t like it.

The class struggle is back on the agenda in Slovenia, and with it the ideas and symbols of socialism. This was clear last Saturday, November 17, when 70,000 workers, students and pensioners marched, in the cold, through the streets of Ljubljana. They were joined by the President Elect, Danilo Tuerk, and the government’s Labour Minister, Marjeta Cotman, along with other members of the Government!

This was a massive turnout for such a small city. The population of the country as a whole is only two million! The atmosphere was incredible, especially from the workers during the speeches. The leaders of the big ZSSS Union (demonstrators in red; it has 300,000 members) were threatening a general strike and stated that this rally was the last warning for employers to meet the demand for a 3.6% pay increase that they are after.

Among the slogans chanted on the demonstration one could hear, “We have had enough of everything - except bread!” and “We want European wages not just EU prices.” A Croatian and Macedonian flag were present on the demonstration, a refreshing indication of the fact that workers had no interest in the reactionary break-up of the former Yugoslavia. Also, among the songs played were old Yugoslav and Partisans tunes, again a harking back to the joint struggle of the workers of all the former Yugoslav republics against Nazi occupation. 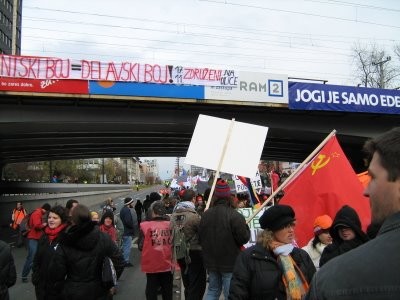 While the official reason for the demonstration was the low wages and the skyrocketing inflation, it was quite apparent that the general mood was that of being fed up with the constant privatisation and all the problems which capitalism has now brought them. There were many anti-EU banners, not to mention many red flags with hammer and sickles. Among the students especially there was radical mood. They showed no bias against the idea of socialism, and they received with applause the Italian trade unionist’s speech about needing to attack capitalism and the state etc.

Back in November 2005 a similar event took place against the government’s counter-reforms in education and the economy. That demonstration saw 40,000 people (the largest demonstration since independence in 1991), workers, students, and the Police of course, on the streets. This time the turnout was almost double, a clear indication that the anger of the workers is growing, both in intensity and in the numbers affected.

The government proposals include the end of subsidised student meals, the end of free education, payments to be made after graduation, and removal of state subsidies for student accommodation. At the same time proposals included a reduction in the amount of tax paid directly by the bosses, but an increase in the tax on goods and services (VAT).

In an article we published in 2005 we questioned whether the fine speeches of the leaders were only for letting off steam. It seems that whatever the reason, the delay in tackling the issues has led to an even bigger demonstration and an increase in militancy. The workers and students now need to carry through the demands and organise a successful general strike. 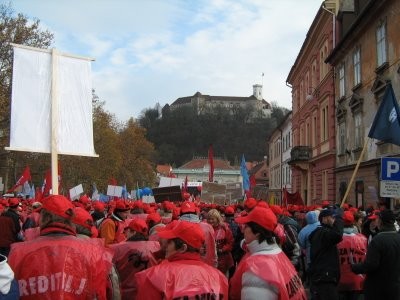 Slovenia is a small country of two million people in Central Europe. It was formerly part of Yugoslavia. It has the highest GDP per capita of the countries that recently joined the European Union (EU) with an estimated income per head of US$28,100 (€20,000, £14,100) for 2008 according to the International Monetary Fund. That is about 90% of the EU average. However, over 10% of the population live below the poverty line and unemployment is over 6%.

It was the most productive of the old Yugoslav Republics accounting for 20% of its GDP. Since the break-up of Yugoslavia it has rushed to join all the leading capitalist clubs such as the World Trade Organisation and the Euro zone. As part of this process it has privatised the banks, telecommunications and the public utilities – mainly from internal private investors.

Its main trading areas are Germany, Austria, Italy and France with over two thirds of trade being with the EU. It specialises in high-tech manufacturing and construction, these two sectors accounting for over one third of GDP. The service sector is also important with 57% of the economy.


Youth column of the demonstration

The headlong rush to capitalism has brought with it all the ills that workers are accustomed to in the West, growing poverty at one end of the social spectrum, with the accumulation of wealth at the other end. The mass of people have seen the social services starved of funds and a general worsening of their quality.

The pro-capitalist ex-bureaucrats were probably expecting social peace to flow from the economic boom. But the opposite has turned out to be the case. With capitalist development inevitably comes the class struggle. There is indeed an economic boom, but this goes hand in hand with an attack on the working and living conditions of the workers and youth.

The attacks on the conditions of the workers, students and pensioners are having an effect on the popularity of the government. The Parliament of 90 members is elected on the basis of mixed member proportional representation, with two seats reserved for ethnic minorities (Hungarian and Italian speakers). There are therefore many parties contesting elections with the likelihood of no one party winning a majority. The government is made up of a coalition.

The opposition is made up of the United List of Social Democrats (ZLSD) with 10 seats and separately Liberal Democracy of Slovenia (LDS) with 23 seats. There are 4 other parties represented.

The government, led by Janez Jansa, an ex-member of the Yugoslav League of Communists and its former youth wing leader, who has now whole heartedly embraced the “free market economy”, i.e. capitalism, refuses to even consider the demands made by the workers stating that the country cannot afford any increase in wages even though the economy is growing.

"Higher salaries should be demanded in companies that have good business results while radical wage demands could endanger companies that are not doing well," Jansa said on Thursday. (New York Times, 17/11/2007)

The recent Presidential election saw the government-backed candidate defeated. Danilo Tuerk, who was supported by the left coalition led by the Social Democrats, gained over 68% of the vote in the second round of the elections. Interestingly, he was supported by one of the parties in the governing coalition, the DeSUS! The President has only influence on Defence and Foreign Affairs. The Social Democrats themselves state that they support the “Third way”. The workers, however, are seeing that these policies no longer meet their needs. The only logical conclusion they can reach is that they must campaign for policies to overthrow capitalism!

As a result of the poll the Prime Minister called for a vote of confidence in Parliament on Monday 20 November to decide whether he would resign. Whilst the coalition has 49 seats he easily won the vote 51 to 33 with 6 absentees.

The result of the election sends a warning to the political parties. Opinion polls suggest that the government will reap its rewards at the next election due in 2008.

The workers are beginning to move and welcome demands for socialist policies. There was repeated singing of the Internationale and Bandiera Rossa from many sections of the demonstration. When the speakers criticised capitalism, privatisation and called for solidarity there were cheers from the crowd.

A small country like Slovenia cannot escape from the pressures of world capitalism or for that matter the worldwide class struggle. What is happening in this small country is indicative of what we will see in all of the ex-Yugoslav Republics and also the former Soviet-dominated East European bloc. They fooled the people that capitalism was the answer to their problems. They can now see that it is not.

What failed in the past was not Socialism but Stalinism. What failed was the attempt to build so-called “socialism in one country.” What is needed is a return to planned economy. But not to the Stalinist version, which was a terribly deformed caricature of what socialism should be. Genuine socialism must be based on workers’ democracy, where the workers control the overall process. That is the lesson that we can draw from the events now developing in Slovenia.

[We would like to thank comrade Jesse Read, who witnessed the rally, and sent us photographs and a brief report, which this article is based on.]