Globalisation
Share
Tweet
The 1990's has seen a huge increase in poverty around the globe. The gap between the rich and the poor is getting wider, and if current trends continue then it will be the year 2147 before areas such as Sub-Saharan Africa can hope to halve the number of people in poverty.

The 1990's has seen a huge increase in poverty around the globe. The gap between the rich and the poor is getting wider, and if current trends continue then it will be the year 2147 before areas such as Sub-Saharan Africa can hope to halve the number of people in poverty.

The statistics, which are from the World Bank and the UN paint an alarming catalogue of human misery, degradation and death. That is the reality of capitalism in the developing world. Ironically it is the very policies of institutions such as the World Bank and the IMF which are forcing whole countries to adopt the bankrupt and corrupt policies of privatization and the opening up of markets to the plunder of multi-national companies that is making the situation worse. For the developing world the Guardian newspaper calls the 1990's the lost decade. I would argue that the working class, and the masses internationally have lost the entire 20th Century and the beginning of the 21st because of the absolute failure of capitalism to advance the mass of humanity.

The figures are disturbing:

These disturbing facts come from the United Nations Annual Development report which saw more than 50 countries have a decline in living standards during the 1990's.

A quarter of the world's countries are suffering increased poverty. The combination of famine, internal conflicts, HIV and Aids, and failed economic policies have turned the clock back and piled on the misery for masses of our fellow human beings. What is required is the nationalisation of the Pharmaceutical industry under the democratic control of the working class and the scientists, in order for resources and expertise to be shared around the globe and find a cure for this awful disease. The medicine could be then made available to those areas that are in most need, and we would gradually begin to wipe out this dreadful disease.

The United Nations has highlighted that urgent action is required to meet the millennium development goals of 2015. However they do not, or refuse to understand that it is the very capitalist system that they represent which is exacerbating and worsening an already appalling situation. If the UN seeks to make the lives of the people better, it must understand that a complete break with the capitalist system will be necessary. The very nature of the system of class exploitation and misery is the very core of how the economic system we live under functions and is responsible for the human suffering that we now witness on a global scale. The day to day decisions of who lives and who dies on this planet are not taken by National Governments but in the board rooms of faceless multi-national corporations whose only reason for existence is the extraction of the maximum amount of sweat, blood and tears from the workers of this planet in order to swell their ever increasing coffers. Under the system of capitalism crime, corruption, and underhandedness go hand in hand. That is the basis of the system, and the only cure is the eradication of that system and it's replacement with a democratic socialist planned economy controlled by councils of workers, trade unions and governments, who are subjected to the immediate right of recall by the people at any time. From this we could then begin to construct a fraternal World Federation based on democratic socialism. Only then will we be able to tackle the misery, poverty and death being suffered by our fellow human beings at the present time.

On this basis we could begin to eradicate poverty. We could bring education, development, and an end to the destructive conflicts that have torn the continent of Africa apart. Then we can begin to enrich the lives of our fellow human beings and put an end once and for all to the human suffering that currently plagues our race. We have the technology, the knowledge and the ability to truly build paradise on Earth for all, while at the same time living in harmony with nature, and putting an end to the environmental destruction of our planet, but none of this is possible under the dying, decaying system of capitalism. The system goes from crisis to crisis and is literally murdering masses of people on a daily basis. We see on a worldwide scale greater instability, conflicts and misery for millions around the globe.

The statistics below illustrate just what a crisis the system is in. 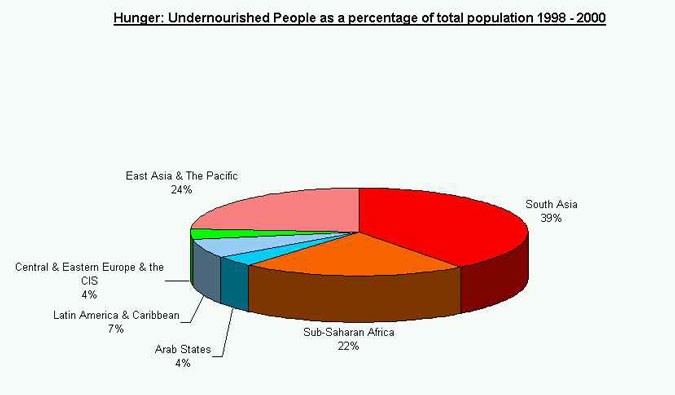 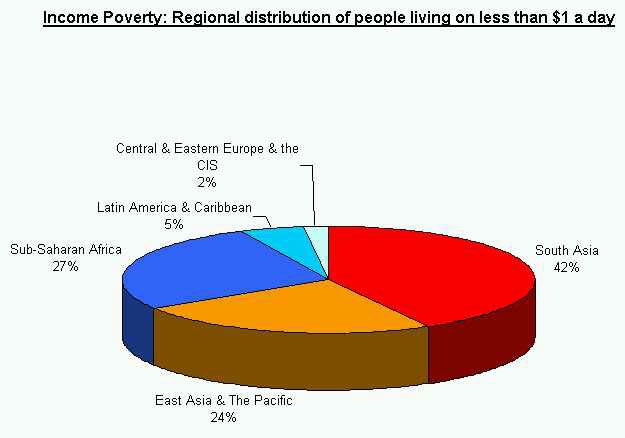 The most disturbing picture is in Asia and Africa where large percentages of the population don't even have enough food to sustain themselves. This is a complete contradiction as we live in a world where the continent of North America alone can more than produce enough food to feed the entire planet, so why are there masses of people without enough to eat. That is yet another contradiction of capitalism itself, where even a basic necessity of life such as food is nothing more than a commodity to be traded on world markets. And because the people are so poor they are not able to purchase this basic necessity of life. Human life itself is but a commodity in the casino world of capitalism.

While Non-Governmental organizations such as War On Want, and the various charities should be commended for their relief efforts in Africa and Asia, ultimately the concept of charity is not tackling the root causes, and is literally only helping a few. The mass of people in Africa and Asia are literally slowly starving to death on a daily basis, as a result of the globalization of capitalism and it's super exploitation of the working classes of these regions. Until this is recognized by the mass of ordinary decent people the suffering is only going to continue to get worse. The very crisis in the capitalist system itself threatens only more wars, conflict, death and instability as the powers of US and European Imperialism squabble with one another on how the world market is going to be divided between them. Even while workers in the west have higher living standards than the poorer parts of the globe, even in the so called developed countries we are seeing an intensification of attacks on the living standards of the working class in Britain, the US, and across Europe. The capitalist system is in terminal decline, and has only clung on to power as long as it has because of the lack of that subjective factor, which is the presence of a revolutionary leadership of the working class, steeped in the ideas of scientific socialism,  in other words of Marxism which is the only programme capable of liberating humanity from the nightmare of the current economic system.

An understanding of why a small Middle Eastern Country such as Iraq was invaded by the superior military force of US imperialism is a stark example of the nature of capitalism to resort to "politics by other means", to try and alleviate, and detract their own populous from the domestic crises of the US economy. Iraq was invaded so that US Multi-Nationals could later go in and plunder the region's resources. This invasion was about opening new markets for exploitation. It was never about "liberating" the people of Iraq from the tyranny of Saddam Hussein. Events since then have more than vindicated the Marxist position on these issues. No weapons of mass destruction have ever been found, and since the invasion the country has descended into anarchy and chaos. There is no sign that the US is putting a structure in place for the people of Iraq. Bush and Rumsfeld are already talking about the next military adventure which looks like being Iran.

In fact the people of Iraq are opposed to the occupation of their country, as the recent deaths of US and British Soldiers have demonstrated. These events demonstrate clearly the outright betrayal of the working class carried out by Tony Blair and the position he is following by openly supporting Bush without question. There is an old saying that holds very true. "When you sell your soul to the devil you end up doing the devil's work", and that statement aptly illustrates the complete capitulation of Blair and "New Labour" to the forces of imperialism and capitalism.

What is required in Iraq now is the building of a co-herent opposition to the occupation based on socialist and Marxist lines. This would give the people a clear programme and perspective for clearing out the forces of imperialism and to begin  the re-construction of their shattered country on a fraternal and democratic socialist programme. This should be aligned to a democratic socialist federation with Kurdistan and Iran, which would ultimately lead to the expropriation of capitalism throughout the whole region. This is the only way forward as none of the conflicting interests at work in the Middle East are solvable on a capitalist basis. The continuing Kurdish problem, and the Palestinian conflict with the State of Israel show this to be clearly the case. The Israeli capitalist class will never allow a functioning Palestinian independent state right on their doorstep.

Humanity is at a crossroads in the current epoch. We can struggle and transform society along the lines I have described or we can continue to descend into the barbarity, and inhumanity that is capitalism in the 21st Century. Those are the choices we face.

For an end to poverty.
An end to wars and conflict
For peace, fraternity and true human development, friendship and community.
For the Socialist transformation of society in order to bring this about.
Down with capitalism and forward to the next level of human evolution.