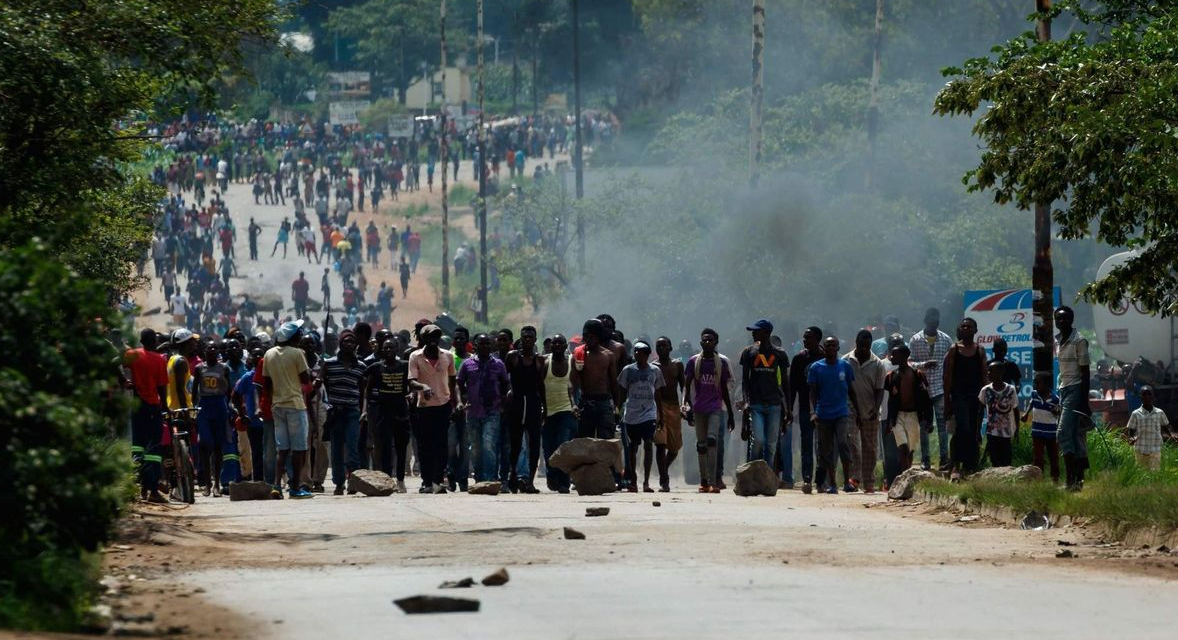 Zimbabwe is again moving in the direction of a social explosion. Over the last few days, mass protests against new austerity measures have spontaneously grown over into a general strike against the government. The strike was formally announced to last for 72 hours – from Monday to Wednesday – but as we write these lines, it is in effect still ongoing.

The economic crisis and its response by the government, of forcing additional austerity measures onto the shoulders of ordinary working-class people, have sparked a furious response from the masses. Saturday’s announcement by president Emmerson Mnangagwa that the price of fuel would increase overnight from $1.34 to $3.11 per litre seemed to be the last straw. Fuel prices are now among the most expensive in the world.

Within hours of the announcement, thousands of people spontaneously took the streets of the capital, Harare. The protests then spread immediately to Bulawayo and from there to all the way to the border with South Africa. Masses of youths began to barricade roads in the Harare suburbs of Epworth and Mabvuku. Then the situation developed rapidly. On Sunday, public transport came to a standstill in Harare when workers went on a wildcat strike. Protesters blocked highways and forced companies that had refused to shut their doors to comply with the strike. The strike spread to other sectors throughout the city and then to the southern towns.

Later in the day, the Zimbabwe Congress of Trade Unions (ZCTU) announced a 72-hour general strike against the fuel hike. In reality, the ZCTU bureaucrats were lagging behind events. The formal announcement, when it came, only recognised what was actually already happening on the ground. 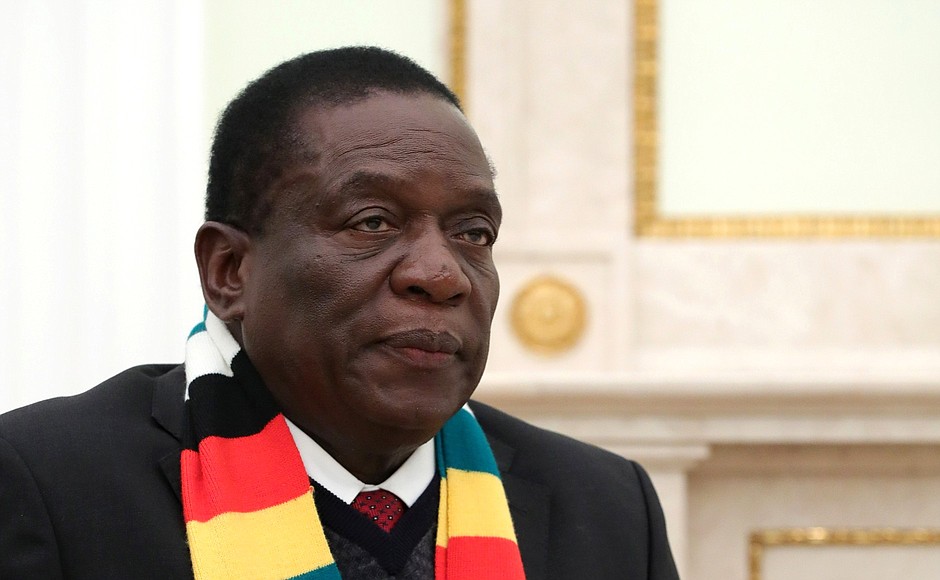 Saturday’s announcement by president Emmerson Mnangagwa that the price of fuel would increase overnight from $1.34 to $3.11 per litre was the last straw for the masses / Image: PoR

On Monday, the strike spread throughout the country with increased militancy. The state, bankrupt both economically and politically, is in no position to grant immediate concessions. This explains the extreme brutality of the crackdown on these protests. As usual, riot police were sent to break up the demonstrations by force. During heavy clashes, the protesters succeeded in repelling the attacks by the police on more than one occasion. In Chitungwiza, a town on the outskirts of the capital, a police station was even stormed by protesters and burned down. This posed a serious threat to the government. The state then deployed the military on the streets.

Immediately, all internet access and telecommunications were cut across the country. This blackout lasted for more than 30 hours. Social media platforms such as Facebook, Twitter and WhatsApp were all disabled. All indications are that the crackdown during the blackout was brutal. When communications were restored, the Zimbabwe Association of Doctors for Human Rights reported that during this period, hospitals treated 172 people for serious injuries, which included 68 people who have sustained gunshot wounds and more than 100 with dog bites. Initial reports say that between five and 10 people were killed and 600 arrested.

But despite this brutal response by the state, it is clear that the crackdown failed to break the strike. In fact, it seems to have spurred it on. The heavy response could explain in part why the strike is lasting past its 72-hour limit. This is very dangerous for the regime. If it fails to suppress the masses through brute force and the masses started to lose their fear, the regime is basically living on borrowed time.

On Wednesday, soldiers continued to raid homes in Harare’s suburbs and townships and beat up people suspected of backing or taking part in the protests. But later that day, troop deployments were suddenly withdrawn in Epworth and Mabvuku. Instead, army helicopters started shooting tear gas canisters into these high-density townships of Harare. But the reason for the withdrawal doesn’t seem to be tactical. The main reason is the fear that the protesters could fraternise with the soldiers, who are also affected by the country’s currency problems. In recent months, the government even had big problems paying the salaries of the troops. This would have the potential to split the army along class lines. On Thursday, the entire transport system was still shut down. The situation seemed to be calmer, mainly because of the troop withdrawal from the townships to the city centres.

This strike therefore has the potential to develop into an all-out general strike growing into next week, which could have insurrectionary implications. The government offered a 10 percent salary increase to public sector workers, which would take effect in April 2019. But due to high inflation it was rightly rejected by the unions. Raymond Majongwe of the Progressive Teachers Union said:

“We cannot see a government that is living in opulence and extravagance telling its workers to tighten their belts.”

Zimbabwe’s economy is in dire straits. Inflation is on the rise, there is a shortage of foreign currency and supplies of fuel, while food and pharmaceuticals are drying up. The country has a severe shortage of cash. The Zimbabwe Dollar was wiped out by hyperinflation more than a decade ago. The country then used a multi-currency system, including the US Dollar and the South African Rand. Then the introduction of so-called ‘bond notes’ in 2016, which were supposed to be equivalent to the dollar, only made matters worse. People saw this as an attempt to bring back the Zimbabwe dollar. They still remember the nightmare of hyperinflation. These bond notes have now lost their value as people started to hoard US dollars, which mainly became available on the black market. These notes are not backed by any economic asset and are hardly worth the paper they are printed on.

This strike has the potential to develop into an all-out general strike growing into next week, which could have insurrectionary implications / Image: Simangele Legodi

The government tried to get out of the crisis by cutting down on imports, which are far greater than Zimbabwe’s exports, thus draining the country of foreign currency reserves. But this is only exacerbating the crisis. The country has a severe balance of payment crisis. 2014 exports were worth $2.5 billion, while imports were $6.25 billion: a negative balance of $3.4 billion. Additionally, the government was still paying the external debt, which meant a constant depletion of foreign currency reserves.

Now the prices of basic goods have more than tripled under the new administration of Mnangagwa, with a shortage of foreign currency leading to scarcities of everything from fuel to food. Mnangagwa is continuing with the same capitalist policies that have devastated the economy. He made his programme clear in an article in the Financial Times last November:

“The national budget must be balanced and spending reined in. A large and inefficient public sector cannot be allowed to hold back private enterprise. Privatisation and reform of state-owned enterprises are also key components of this strategy.”

This was a declaration of war against public sector workers. The result of this policy can now be seen in the state of the economy and the clashes in the streets.

The disastrous consequences of the imperialist policies

The IMF’s Structural Adjustment Programmes of the 1980s and 1990s were faithfully implemented by Robert Mugabe and his right-hand man, Emmerson Mnangagwa, for the first two decades of their rule. Here are to be found the real roots of the current crisis, not in the land expropriation of white farmers, which followed later. These measures devastated the country. It was only when there was a revolt from below, that Mugabe, for fear of losing power, started attacking the IMF and demagogically putting himself at the head of the land expropriation process. In turn, the economic and political zig-zags of the Mugabe regime exacerbated the crisis.

The crippling sanctions imposed by the west, allegedly against human rights abuses by the regime, only exacerbated the suffering of the masses. In August 2018, US President Donald Trump signed the Zimbabwe Democracy and Economic Recovery Amendment Act (Zidera), which extended these sanctions. The European Union and the US imposed sanctions against Zimbabwe in 2000, after they accused ex-president Robert Mugabe of trampling on human rights, rigging elections and repressing press freedom. The sanctions further devastated the economy, pushing unemployment to about 85 percent.

These same western countries, mainly Britain and the United States, propped up the Zanu-PF regime for decades when it was faithfully carrying out the dictates of the IMF. Where was the moral outrage against human rights abuses when the regime carried out the Gukurahundi massacres when between 1983 and 1987, in which more than 20,000 Ndebele people were killed by the army’s 5th Brigade led by the current president, Emmerson Mnangagwa? Instead, Mugabe was showered with praise, accolades and honorary doctorates from western universities. These sanctions had nothing to do with protecting human rights or democracy. They were a direct response to Mugabe dropping the IMF structural adjustment programmes after they devastated the country. 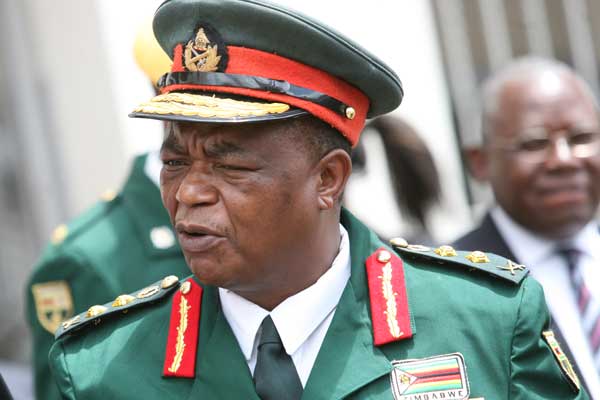 There are reports of divisions between Mnangagwa and Chiwenga. If the government fails to get back control, the generals could decide to dispense with civilian rule / Image: Lemonzzandfreecolt

The November 2017 coup that kicked out Mugabe revealed a deep split in the regime. Decades austerity and capitalist crisis had completely undermined the Zanu-PF government. After the coup, military officers were deployed in the government, including the head of the army, Constantino Chiwenga, who led the coup against Mugabe. Now there are reports of deep divisions between Mnangagwa and Chiwenga. If the government fails to get back control, the generals could decide to step in yet again. But this time, they could decide to dispense with the niceties of “civilian rule” and impose direct rule in the form of a bonapartist military dictatorship. Then again, given the situation, it is possible the army itself could break along class lines, which would make imposing such a regime very difficult.

On the other hand, the masses have been pushed by the intolerable situation to take their destinies into their hands and now are losing fear of state repression. This could lead to an insurrectionary situation, which could bring down the government. The problem facing the movement is that there is no revolutionary leadership in place. ZANU-PF and the three factions of the opposition Movement for Democratic Change, are not capable of offering a real solution to the Zimbabwean masses.

So long as capitalism exists there is no way out for the masses. What is required is a workers’ party with a revolutionary socialist programme, based on the expropriation of the land and industry. Such measures would encounter the resistance by reactionary forces within the country and imperialism, but would resonate in the hearts of millions of workers throughout the continent and further. The spark of revolution would land on very combustible material among the South African workers and youth and throughout the continent. The revolutionary force of the working class and youth of Zimbabwe is showing already that they can dislocate and overthrow the regime, but the vacuum of power may be filled by parts of the existing ruling class, by sections of the army or of the existing opposition, who have no real solution to offer. Even in this case, any attempt to restore order and move back to capitalist austerity will meet the resistance of the revolutionary youth and working class of Zimbabwe, which will be forced again and again to take the initiative. It is our duty to support them.