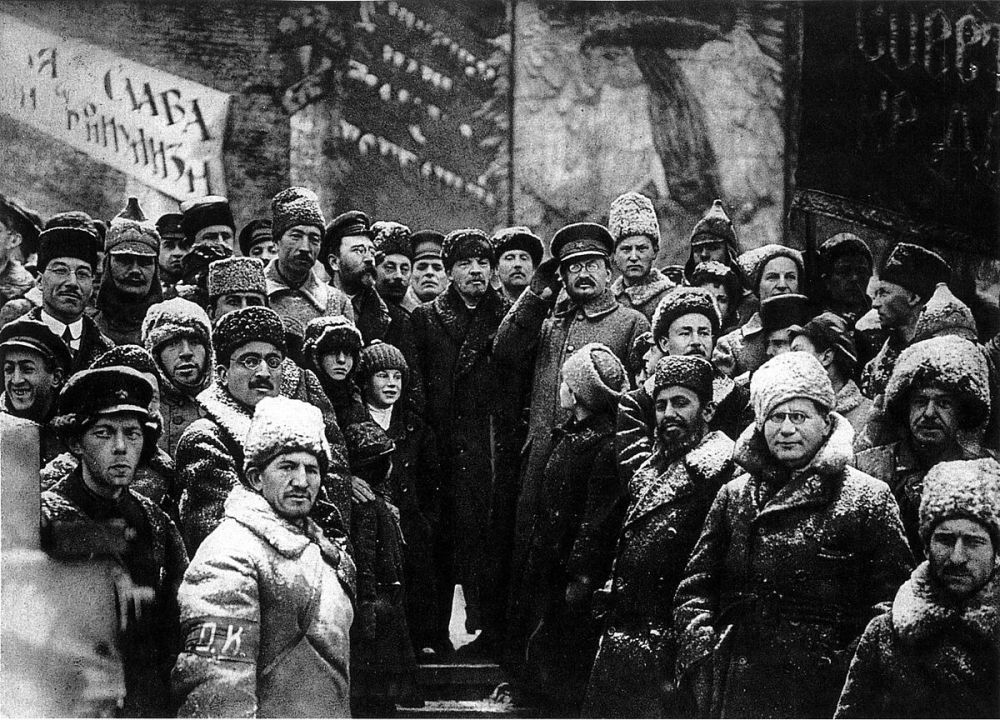 Let us examine more closely what is going on.

All these are facts, big facts. These are the facts that strike the outer world most. Changes in the higher government give the bourgeoisie of Europe and America an occasion to say that the revolution has won and is now completed.

The Tzar and his Black Hundred fought for their power, for this alone. The war, the imperialistic plans of the Russian bourgeoisie, the interests of the Allies, were of minor importance to the Tzar and his clique. They were ready at any moment to conclude peace with the Hohenzollerns and Hapsburgs, to free their most loyal regiment for war against their own people.

The progressive imperialistic Bloc wanted peaceful reforms. The liberals intended to exert a Duma pressure on the monarchy and to keep it in check with the aid of the governments of Great Britain and France. They did not want a revolution. They knew that a revolution, bringing the working masses to the front, would be a menace to their domination, and primarily a menace to their imperialistic plans. The laboring masses, in the cities and in the villages, and even in the army itself, want peace. The liberals know it. This is why they have been enemies of the revolution all these years. A few months ago Milukov declared in the Duma: “If a revolution were necessary for victory, I would prefer no victory at all.”

Yet the liberals are now in power – through the Revolution. The bourgeois newspaper men see nothing but this fact. Milukov, already in his capacity as a Minister of Foreign Affairs, has declared that the revolution has been conducted in the name of a victory over the enemy, and that the new government has taken upon itself to continue the war to a victorious end. The New York Stock Exchange interpreted the Revolution in this specific sense. There are clever people both on the Stock Exchange and among the bourgeois newspaper men. Yet they are all amazingly stupid when they come to deal with mass-movements. They think that Milukov manages the revolution, in the same sense as they manage their banks or news offices. They see only the liberal governmental reflection of the unfolding events, they notice only the foam on the surface of the historical torrent.

The long pent-up dissatisfaction of the masses has burst forth so late, in the thirty-second month of the war, not because the masses were held by police barriers-those barriers had been badly shattered during the war – but because all liberal institutions and organs, together with their Social-Patriotic shadows, were exerting an enormous influence over the least enlightened elements of the workingmen, urging them to keep order and discipline in the name of “patriotism.” Hungry women were already walking out into the streets, and the workingmen were getting ready to uphold them by a general strike, while the liberal bourgeoisie, according to news reports, still issued proclamations and delivered speeches to check the movement, – resembling that famous heroine of Dickens who tried to stem the tide of the ocean with a broom.

The movement, however, took its course, from below, from the workingmen’s quarters. After hours and days of uncertainty, of shooting, of skirmishes, the army joined in the revolution, from below, from the best of the soldier masses. The old government was powerless, paralyzed, annihilated. The Tzar fled from the capital “to the front.” The Black Hundred bureaucrats crept, like cockroaches, each into his corner.

Then, and only then, came the Duma’s turn to act. The Tzar had attempted in the last minute to dissolve it. And the Duma would have obeyed, “following the example of former years,” had it been free to adjourn. The capitals, however, were already dominated by the revolutionary people, the same people that had walked out into the streets despite the wishes of the liberal bourgeoisie. The army was with the people. Had not the bourgeoisie attempted to organize its own government, a revolutionary government would have emerged from the revolutionary working masses. The Duma of June 3rd would never have dared to seize the power from the hands of Tzarism. But it did not want to miss the chance offered by interregnum: the monarchy had disappeared, while a revolutionary government was not yet formed. Contrary to all their part, contrary to their own policies and against their will, the liberals found themselves in possession of power.

Milukov now declares Russia will continue the war “to the end.” It is not easy for him so to speak: he knows that his words are apt to arouse the indignation of the masses against the new government. Yet he had to speak them – for the sake of the London, Paris and – American Stock Exchanges. It is quite possible that he cabled his declaration for foreign consumption only, and that he concealed it from his own country.

The masses have revolted, demanding bread and peace. The appearance of a few liberals at the head of the government has not fed the hungry, has not healed the wounds of the people. To satisfy the most urgent, the most acute needs of the people, peace must be restored. The liberal imperialistic Bloc does not dare to speak of peace. They do not do it, first, on account of the Allies. They do not do it, further, because the liberal bourgeoisie is to a great extent responsible before the people for the present war. The Milukovs and Gutchkovs, not less than the Romanoff camarila, have thrown the country into this monstrous imperialistic adventure. To stop the war, to return to the ante-bellum misery would mean that they have to account to the people for this undertaking. The Milukovs and Gutchkovs are afraid of the liquidation of the war not less than they were afraid of the Revolution.

This is their aspect in their new capacity, as the government of Russia. They are compelled to continue the war, and they can have no hope of victory; they are afraid of the people, and people do not trust them.

This is how Karl Marx characterized similar situation:

“From the very beginning ready to betray the people and to compromise with the crowned representatives of the old regime, because the bourgeoisie itself belongs to the old world; keeping a place at the steering wheel of the revolution not because the people were back of them, but because the people pushed them forward; ... having no faith in themselves, no faith in the people; grumbling against those above, trembling before those below; selfish towards both fronts and aware of their selfishness; revolutionary in the face of conservatives, and conservative in the face of revolutionists, with no confidence in their own slogans and with phrases instead of ideas; frightened by the world’s storm and exploiting the world’s storm, – vulgar through lack of originality, and original only in vulgarity; making profitable business out of their own desires, with no initiative, with no vocation for world-wide historic work ... a cursed senile creature condemned to direct and abuse in his own senile interests the first youthful movements of a powerful people, – a creature with no eyes, with no ears, with no teeth, with nothing whatever, – this is how the Prussian bourgeoisie stood at the steering wheel of the Prussian state after the March revolution.”

These words of the great master give a perfect picture of the Russian liberal bourgeoisie, as it stands at the steering wheel of the government after our March revolution. “With no faith in themselves, with no faith in the people, with no eyes, with no teeth.” ... This is their political face.

Luckily for Russia and Europe, there is another face to the Russian Revolution, a genuine face; the cables have brought the news that the Provisional Government is opposed by a Workmen’s Committee which has already raised a voice of protest against the liberal attempt to rob the Revolution and to deliver the people to the monarchy.

Should the Russian Revolution stop to-day as the representatives of liberalism advocate, to-morrow the reaction of the Tzar, the nobility and the bureaucracy would gather power and drive Milukov and Gutchkov from their insecure ministerial trenches, as did the Prussian reaction years ago with the representatives of Prussian liberalism. But the Russian Revolution will not stop. Time will come, and the Revolution will make a clean sweep of the bourgeois liberals blocking its way, as it is now making a clean sweep of the Tzarism reaction.