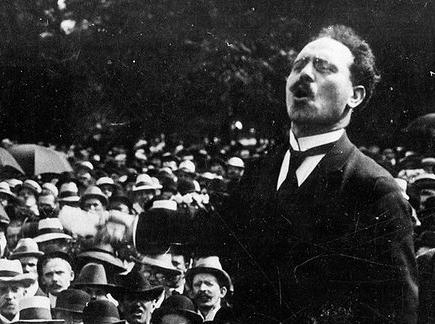 The “Berner Tagewacht” publishes the full text of Karl Liebknecht’s protest in the Reichstag against the voting of the war credits. The protest was suppressed in the Reichstag, and no German paper has published it. It appears that seventeen Social-Democratic members expressed their opposition to the credits on December 2, but Karl Liebknecht’s was the only vote recorded against them.

“this war, which none of the peoples involved desired, was not started for the benefit of the German or of any other people. It is an Imperialist war, a war for capitalist domination of the world markets and for the political domination of the important countries in the interest of industrial and financial capitalism. Arising out of the armament race, it is a preventative war provoked by the German and Austrian war parties in the obscurity of semi-absolutism and of secret diplomacy.

“It is also a Buonapartist attempt tending to demoralise and destroy the growing Labour movement.”

“The German word of command ‘against Czarismus,’ like the English or French word of command ‘against militarism,’ has been the means of bringing forth the most noble instincts, the revolutionary traditions and hopes of the peoples, for the purpose of hatred among the peoples. Accomplice of ‘Czarismus,’ Germany, a model country of political reaction, possesses not the qualities necessary to play the part of a liberator of peoples ...

“This war is not a defensive war for Germany. Its historical character and the succeeding events make it impossible for us to trust a capitalist Government when it declares that it is for the defence of the country that it asks for the credits.

“A peace made as soon as possible and which will humiliate no one is what must be demanded. All efforts in that direction should be supported. A simultaneous and continual demand for such peace in all the belligerent countries will be able to stop the bloody massacre before the complete exhaustion of all the peoples concerned .....”

“our brothers on the field of battle, and those wounded and sick, for whom I have the warmest compassion .... But my protest is against the war, against those responsible for it, against those who are directing it; against the capitalistic ends for which it is being pursued, against the violation of the neutrality of Belgium and Luxemburg, against military dictation, and against the complete neglect of social and political duties of which the Government and the dominant class are guilty to-day.”