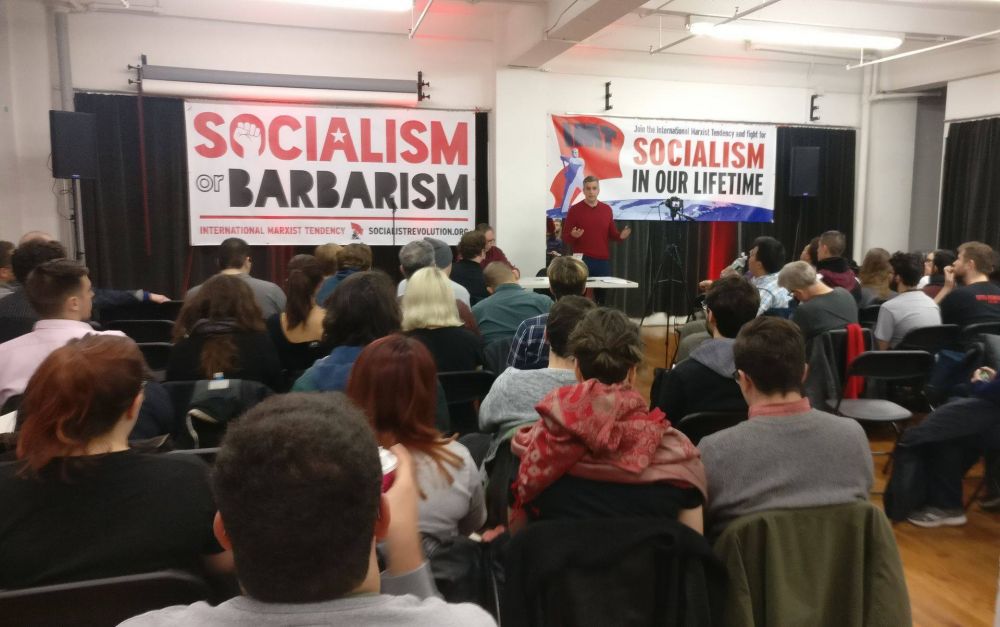 The International Marxist Tendency held its annual NYC Marxist School on the weekend of November 9 & 10. This year it was co-sponsored by the Queens DSA Political Education Working Group, which has worked with the IMT to organize the Marx Was Right Forum. This weekend’s school was the largest IMT Marxist School yet organized in the US, with nearly 100 in attendance!

This year we were joined by a special guest, comrade Rob Sewell, editor of the British Marxist magazine, Socialist Appeal. On this side of the Atlantic, comrades were in attendance from New York, New Jersey, Boston, Philadelphia, Pittsburgh, Cleveland, North Carolina, and Canada. Even a comrade from California was there to help organize the event! The higher turnout shows the rising interest in Marxist ideas. 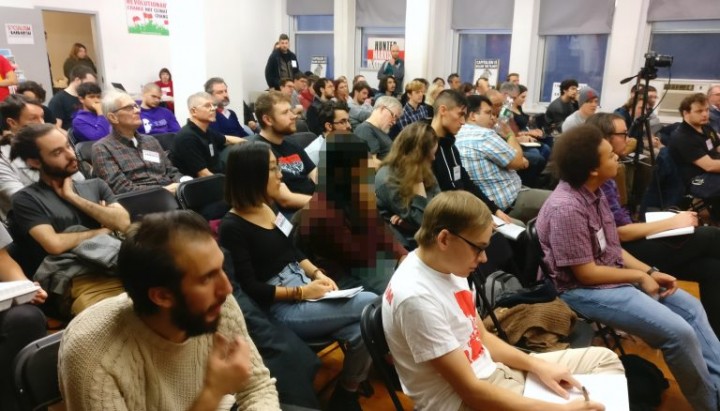 Taking place 100 years after the murders of the great German revolutionaries Rosa Luxemburg and Karl Liebknecht, the theme for the school was “Socialism or Barbarism.” Humanity today also faces this choice, but if today’s revolutionaries learn the important lessons from the past, then the victory of socialism is all but assured!

The school took up topics related to this theme. Rob Sewell started Saturday morning off with a discussion of the failure of the German Revolutions from 1918 through the early 1930s and the consequent rise of the Nazis. His new book on the subject, Germany 1918–1933: Socialism or Barbarism was on sale at the event and 12 copies were sold.

On Saturday afternoon, John Peterson, the editor of Socialist Revolution, led off the discussion on “Socialism in 2019: Reformism or Revolution.” This was a way to connect the lessons of the past with today’s political battles. Old reformist ideas, like the ideas of Karl Kautsky, are being resurrected in today’s movement. The proponents of Kautsky, like Jacobin magazine, are not examining the failure and consequences of his ideas on the movement. John explained that if we carefully study these lessons, then socialism in our lifetime is within reach. These strategic questions are especially relevant in the context of rising class struggle in the US and the socialist approach to electoral politics—particularly around the Bernie Sanders campaign.

On Sunday, Rob spoke again and gave a presentation on the present crisis of British capitalism and the perspectives for the British revolution. He examined Brexit, the crisis of the Tory Party, and the rise of the left in the Labour Party, led by Jeremy Corbyn. Rob explained how the ideas of Marxism are growing inside and outside of the British Labour movement and why these ideas can lead the working class forward to a new society. Comrades added that the developments in Britain will have an influence elsewhere—especially here in the US

The school also received a report on the campaign to drop the charges against comrade Max Herrera and three other activists. These comrades participated in protests against fascists marching in Hamilton, Ontario. The police didn’t arrest any fascists involved in violence but arrested comrades trying to defend themselves and others from fascist attacks. In response to this, the comrades have launched an energetic international solidarity campaign, and will redouble their efforts against the far right and police intimidation of the left. 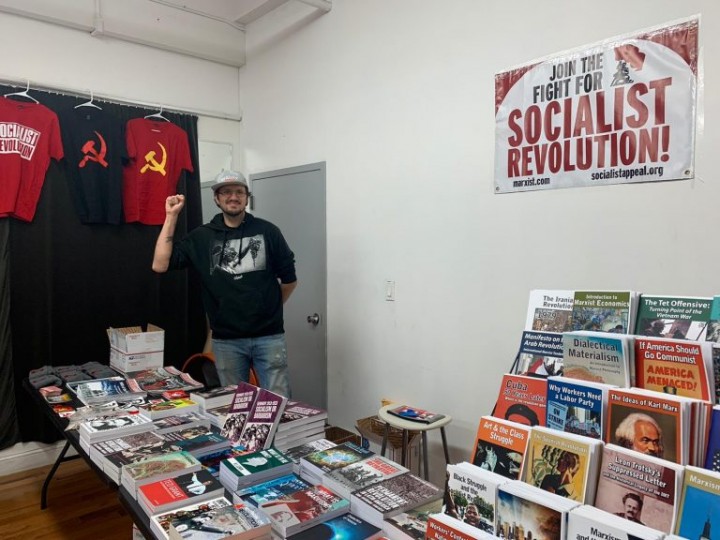 In the final session of the school, Tom Trottier explained how to fight climate change through class struggle. We must view this vital question as a class issue, connected with many other problems facing the working class. The only solution is the struggle for a workers’ government with a socialist program—there is no government of the ruling class that can solve the climate crisis. As an example, just one hundred big companies are responsible for more than 70% of greenhouse gas emissions. Expropriating the key levers of industry would put extraordinary resources at the disposal of humanity, allowing the working class to rationally plan the economy while mitigating climate change. Such policies, carried out by a workers’ government, are the only way to effectively combat climate change, the first real steps towards a socialist society.

To end the weekend, we had closing remarks from John Peterson and all sang the Internationale and Bandiera Rossa. Throughout the weekend, there were terrific discussions in and out of the sessions. Many people purchased books, booklets, and papers. Many attended for the first time and expressed their interest in getting involved with the IMT. Seeing this year’s success, we are set up for an even bigger NYC Marxist School next year, which will be held just days after the 2020 elections.