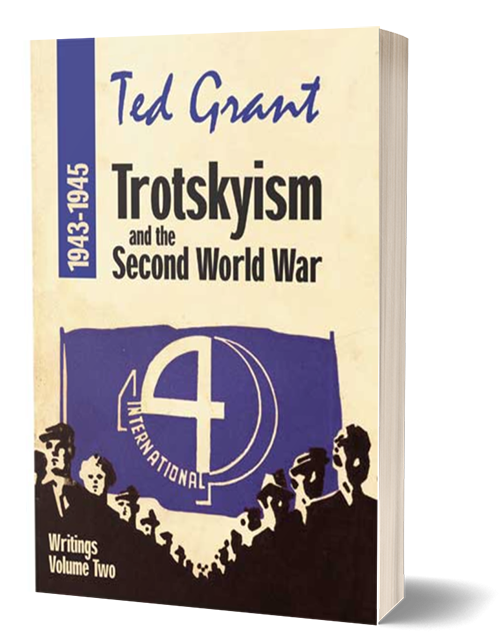 Second front and the tasks of the working class

Statement of the political bureau of the Revolutionary Communist Party

The second front has been launched and the most decisive phase of the military struggle in the course of the war is about to commence. By sea and air, hundreds of thousands of men are being flung into Europe in preparation for what is undoubtedly the final phase of the battle of the armies.

Simultaneously with the opening of the second front, the Anglo-American imperialists have opened up a tremendous press campaign to infuse the British workers with a determined “will to victory” and to prepare them for the mounting toll of casualties in what is likely to be the bloodiest period of struggle.

From a military point of view it appears that the “Allies” now have superiority of arms and men and that the war is undoubtedly at the “beginning of the end.”

Hundreds of thousands, probably millions, of the cream of all the nations will die on the beaches and in the battles which are now opening up: rich manure out of which the imperialists of all nations, fascist and democratic alike, plan to reap untold profits. These men, who will give their lives, are told that their historic mission is the destruction of fascism and the liberation of Europe.

But the capitalists lie when they say that these sacrifices will mean the destruction of fascism! They lie when they proclaim that it will lead to the liberation of Europe! So also do their allies and lackeys lie who are in the leadership of the working class movement here in Britain. These blood sacrifices are being made not in the interests of democracy, but of Anglo-American imperialism.

The debacle in North Africa where a deal was done with quisling Darlan, in Italy, where king Victor [Emanuel] and Badoglio replaced Mussolini – and were only removed at the insistence of the masses, despite the protection afforded them by Churchill and Roosevelt; the recent speech of Churchill in which he applauded fascist Franco who butchered the flower of the Spanish working class and peasants: these acts are ample evidence that the programme of Anglo-American imperialism is not an anti-fascist programme, is not a programme of liberation. Only a workers’ army united by class bonds and with a class programme can perform these progressive and historic tasks.

The new phase in the military field opens up wide perspectives and a new phase in the political field. The refusal to recognise even the anti-socialist de Gaulle as the new leader of France is evidence that the Allies are leaving themselves free to do a deal with a more reactionary bloc – the Vichyites or another section of the French quislings – that they are leaving themselves free to do another Darlan. This is to be expected if it suits their interests and is in line with their programme and past activities.

But the French workers cannot and will not support such a foul manoeuvre. Nor should they place their hopes and trust in the programme of the apparently more radical de Gaulle!

The difficulties of the Nazi armies, their defeats and retreats, will undoubtedly uplift and encourage the French masses to organise widespread partisan warfare. The workers and peasants of France will arm themselves and fight for their liberation. Every independent step on the part of the masses in the struggle for national liberation will be greeted with joy on the part of the internationalists – the Trotskyists.

In the period of transition the widespread liquidation of the French quisling capitalists and administrators will be undertaken by the masses – before the leaders of the Allied armies contact the quislings and seek to protect them and incorporate them into the “liberated administration” – as they did in Italy and North Africa. Local government forms will be set up and the centralisation of the partisan bands will commence. But the centralisation of the partisans under the leadership of agents of Anglo-American imperialism, their collaboration and subjugation to the armies of the “Allies”, which follows from the policy of de Gaulle and his so-called socialist and communist allies, is a dangerous policy, fatal to the real interests of a free France and fatal to the socialist aspirations of the French workers and peasants.

Only an independent class policy, a socialist policy, a Bolshevik policy; only centralisation under the leadership of the working class and a Trotskyist party, can lead to a free and united France as part of the socialist united states of Europe. Such a leadership would issue a proclamation to the German soldiers calling upon them to desert their officers, lay down their arms or take them over to the French workers and peasants, and to participate in a policy of class fraternisation. Such a leadership would denounce the policy of national hatred and the subjugation of Germany to a new Versailles and call upon the German workers, together with the workers of all Europe to destroy capitalism and all its political forms, and to organise a free and united socialist states of Europe.

The revolutionists in France will strive for such a policy and will receive the full and unqualified support of the British Trotskyists in that task.

At home the introduction of 1AA, and now the opening of the second front, has given rise to a period of industrial quiet, hesitation and apprehension. The wave of strikes which swept the basic industries has been temporarily calmed. The masses fear the slaughter of their loved ones and hesitate to act in a manner which they believe might endanger their efforts on the military front and prolong the end of the war.

Echoing the ruling class, the Labour, trade union and Stalinist leaders outdo each other in ecstasies of downright jingoism. The Labour and Stalinist leaders out-Vansittart Vansittart in their denunciation of the German people – forgetting that it was their German counterparts, who by their false policies, helped Hitler to come to power, and for whom they bear full responsibility.

For three years the Stalinists have been clamouring for the second front. Every vestige of class programme and class tactic was subordinated in the interests of bringing about this second front. In Parliament, Gallacher, a portrait in renegacy, weeps crocodile tears at the sacrifices the lads are about to make – but he urges them on. The second front has been opened, not to aid the Soviet Union or because of the protestations of Stalin or of his British puppets, but because it suits the military and political interests of the ruling class.

In the Daily Worker the appeal of the French communists has a crosshead: Death to the Boche, demonstrating yet again the foul role that these renegades play in the ranks of the working class. Meanwhile the ruling class repays the Stalinists with a kick in the teeth – even refusing to allow (for reasons of “national security”!) these miserable renegades an accredited representative of the Daily Worker to enter France in common with all the other patriotic press. Treachery to the working class is thus paid with kicks and with thanks.

In the face of the second front, its death and destruction, it is easy to break faith with the socialist programme. It is easy to break faith with the British and international working class. But we Trotskyists refuse to break that faith by not telling the truth about the second front, explaining its aims and objects. We refuse to be silent whilst the fate of humanity is being determined for generations to come. The policy of the Allies, if accepted by the masses will lead to a Europe parallel to the “New Order” of Hitler. It will lead to the rule of quislings equally as vicious and brutal as Laval. Nazism will be destroyed, but reaction will reign.

The British ruling class are preparing to stabilise their position at home after the war. They are preparing for attacks against the rights and organisations of the working class. The arrest of our comrades under the vicious Trade Disputes Act is but the beginning. It will be followed by further attacks under 1AA against the more powerful organisations of the working class.

When the “liberators of Europe” have made their sacrifice, and the rest return home, their democratic liberties will only be returned and extended by yet another battle. This is already widely understood in the ranks of the working class.

In the coming days the false prophets will be tested. All parties and their policies will be seen in the light of big events and battles. We Trotskyists are not sceptics. We have supreme confidence in the working class, in their ability to threw up new revolutionary leaders and to fight for a revolutionary policy.

In Europe and at home the epoch of revolutionary socialism is about to unfold. Our policy of class struggle; of breaking the truce with the capitalists and fighting for Labour to power on a socialist programme; of uniting Europe into a powerful united socialist states together with Britain and the Soviet Union; of uniting the workers of the world in a socialist society – this policy, we are confident, will appeal to the workers as the only solution for the destruction of capitalism and its ulcers, fascism, political gangsterism, colonial suppressions, reaction and wars.