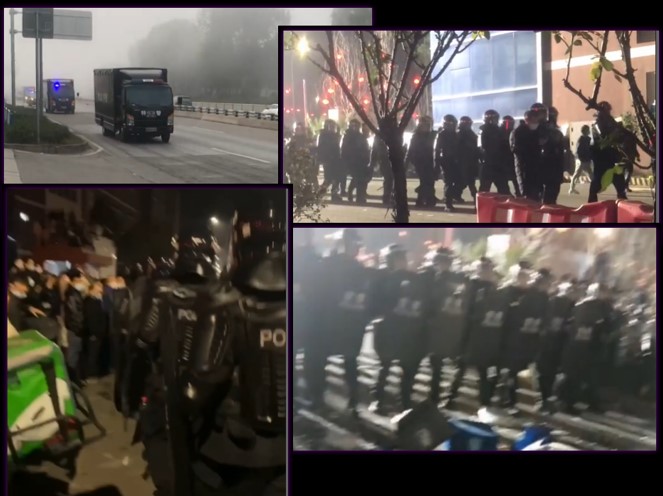 For the past few weeks, with the Lunar New Year approaching, the working class in China has been engaged in a wave of economic strikes, protests and demonstrations. Whilst these struggles vary in terms of scale and militancy, collectively they give a clear indication of the deepening socio-economic crisis, and of the courageous groundswell of class struggle that this is causing to rise up against the capitalist regime.

Back in December, the Chinese state suddenly abandoned its hardline pandemic policies, and the coronavirus swiftly swept through China, resulting in terrible misery and a staggering death toll, the true scale of which the regime is struggling to keep hidden. By 11 January, Peking University estimated that at least 64 percent of the Chinese population had been infected by COVID-19. In some places (such as Henan province, northern China, and Yunan, south-western China) the infection rate is reportedly over 80 percent. It can be inferred from such figures that the peak of this current wave of the pandemic has now passed in China. As such, the state declared the opening of its borders to the rest of the world on 8 January.

But the end of the acute phase of the pandemic will not ease the class tensions within Chinese society – on the contrary, it will intensify them. With the end of the ‘Zero COVID’ policy, those industries that profiteered off the policy have been plunged into bankruptcy. What is more, the situation has been made more acute by the lightning speed of the change of state policy. There has been no gradual winding down of the industry. Rather, thousands of workers have faced the sack all at once on the eve of the holiday season, leading to mass anger directed at the capitalist regime itself in various locations.

A screenshot demonstrating the tension between bosses and workers. One employee replies “to hell with you” in the company group chat / Image: Internet

On 7 January, more than 10,000 militant workers at a large medical manufacturer (Zybio) besieged and occupied a facility in Chongqing (an industrial metropolis in south-western China, with a population in the tens of millions). Thus began a mass movement for the immediate payment of wages, stipends and compensation. The struggle erupted spontaneously after the company’s sudden announcement that from 3 January it would sack more than 7,000 temporary employees without compensation.

This is a typical instance of the capitalists transferring the pain from themselves to the workers. With the termination of orders for medical materials produced (such as antigen test kits), the capitalists judged it only ‘fair’ and ‘reasonable’ that they should sack the workers without compensation to prevent bankruptcy.

The sacrificed workers had come to the factory on the promise of ‘high’ hourly wages of 23-28 RMB (around $3-4 USD) and stipends of 6,000 RMB (around $880 USD). But they were soon stripped of half of that sum (and in some cases even more than half) by the bloodsucking temporary work agencies that take their commission directly from the workers wages. And once in the factory, the workers were subjected to brutal exploitation, poor working conditions and long work days. The sackings were the last straw, leaving the workers no option other than to struggle against the corporation.

The workers first tried to negotiate with the temp work agencies that had extorted them, but these agencies offered a miserable compromise of 1,000 RMB in compensation, instead of the 6,000 RMB that had initially been promised. 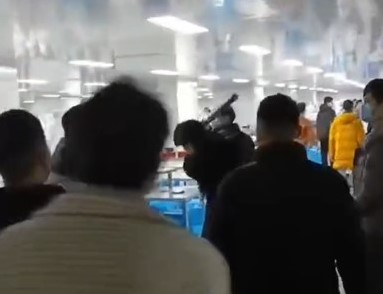 The workers laid siege to the plants, demanding the immediate payment of arrears / Image: screen grab

This daylight robbery set the struggle in motion, and the workers laid siege to the plants, demanding the immediate payment of arrears. But with the company in no mood to compromise either, the angry workers began destroying machines and antigen test kits, and beating the hated representatives of the temp agencies.

The corporation, Zybio, had been among the local government of Chongqing’s top tax payers. It was also in a strategic partnership with the massive state-owned enterprise, Chongqing Pharmaceutical (Group) Co., Ltd. As the angry workers besieged the factory and began destroying the machines and commodities owned by the company, the capitalists naturally summoned the ‘people’s police’, armed in heavy gear, with batons and riot shields to disperse the workers.

On the night of 8 January, the workers were forcefully dispersed. But in the course of the dispersal, these 10,000 workers showed the utmost bravery against the government strikebreakers. They stood in solidarity, repulsing the first wave of attacks by the police, who were forced to retreat under a hail of projectiles. 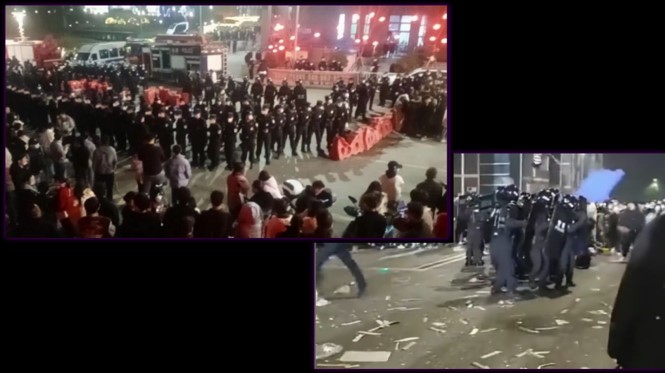 The workers showed the utmost bravery against the police and strikebreakers / Image: screen grab

The bosses, fearful of the success of the spontaneous movement of the workers in repelling the police, responded with concessions in the following days. Some temp work agencies began to pay arrears by the early morning of 8 January. And despite some failed counter-interventions by the state on the morning of 8 January, most of the workers had received what they demanded by 9 January.

Whilst the militant struggle of the Chongqing workers was ongoing, workers had also gathered to protest en masse (although not in such large numbers) at pharmaceutical manufacturing facilities in Hangzhou, Zhejiang Province in eastern China, between 5-6 January, and 8-9 January. The workers posed similar demands and were out for similar reasons. The police suppression they faced was also similar to that in Chongqing.

Other sectors have also seen the eruption of struggle in the context of the onrushing crisis of Chinese capitalism. Construction, for instance, has become a growing site of struggle (especially by mingong, migrant workers) as a consequence of the massive, unpayable debt accumulated by construction companies. In total, China’s public debt in infrastructure constructions amounts to 60 trillion RMB (around $8.8 trillion USD). Again, as in the pharmaceutical industry, the workers are the first to be sacrificed by the capitalists to avert bankruptcy, leaving the workers with huge wage arrears.

And so we have seen railway construction workers blocking site gates with construction vehicles in Jiujiang, Jiangxi Province in southern China on 15 January; metro construction workers erecting banners demanding arrears in Guangzhou, Guangdong Province; and railway workers raising similar slogans over arrears in Xinyang, Henan Province. Indeed, of the more than 180 cases of collective action recorded between December 2022 and 17 January 2023 by the China Labour Bulletin, most were in the construction sector.

The past few months have witnessed two large, and extremely militant mass movements of workers – the first at the Foxconn factory in Zhengzhou, and the other in Chongqing – and numerous smaller collective actions. These are a foretaste of what is to come; symptoms of the growing militancy and radicalism of the Chinese working class. Consciousness is rapidly changing. 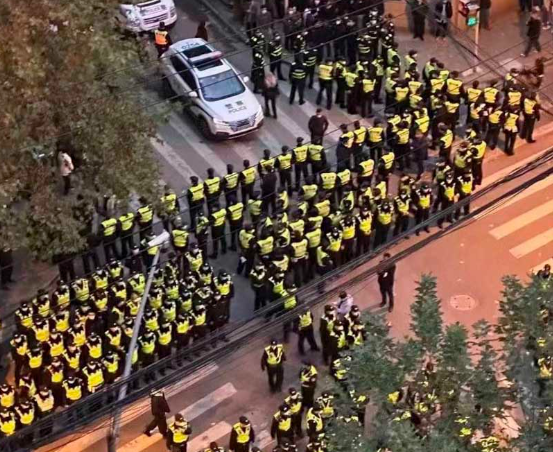 The militant Foxconn factory movement in Zhengzhou, and these events now in Chongqing, are a foretaste of things to come / Image: fair use

With the prestige of the CCP regime tarnished in the wake of this chaotic and convulsive end to COVID measures, and with the crisis deepening day by day, the Chinese working class is beginning to see the regime of the ruling party for what it is: a pro-capitalist dictatorship, which will lend its strong arm to the capitalists in the unfolding class struggle.

As class consciousness grows, so too will militancy. It will become clear to the most advanced layers that their enemy is not this or that capitalist, but the entire capitalist class and the regime that protects it. Each new wave of struggle will raise in the minds of this advanced layer the need to wage a struggle for the overthrow of the whole capitalist system. And it will pose the need for a capable revolutionary leadership up to the task of guiding the masses towards a final, historic victory. The building of the revolutionary forces of Marxism internationally has never been so urgent.