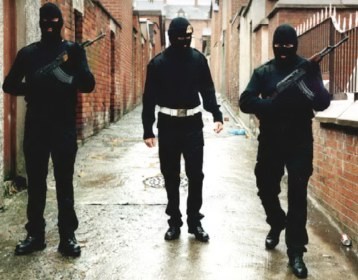 Friday 9th of August the forces of loyalism directed by the UVF and the Belfast Lodges of the Orange Order took over the main street in Belfast, Royal Avenue to block an anti-internment march. They rioted attacked the police, burnt cars and tried to attack the marchers.

The background to all this was the decision of a number of republicans to form an anti-internment group to highlight the continuing harassment and jailing of republicans without due process of law. Secret courts secret documents are all used to put away those whom the British see as threats to the institutions set up under the Good Friday Agreement. Marian Price was unjustly kept in jail for a number of years simply for holding up a piece of paper. Stephen Murney is still in jail for taking pictures of police harassment and Martin Corey does not yet know why he was re-arrested and has spent three years in jail.

The march was labeled by the media as a dissident march. It was not. It was a march comprising republicans, democrats, civil liberties supporters. Comprising several thousand strong it was a disciplined march despite being attacked by loyalists and twice blocked by the PSNI and re-routed. Noticeable absent from the march were Sinn Fein and the small socialist sects. They no doubt held their noses and called the march a sectarian march. One participant of the march subsequently wrote the following

"It was also evident that there were no socialist currents either on the parade or around the fringes. They have abandoned all thought of unfulfilled democratic tasks in pursuit of socialism for today, or rather what they consider to be socialism. The assessment they make of the recalcitrant republicans is one they hold in common with hired pundits who work for the capitalist owned press; that they are dreadful atavistic nationalists whose time has thankfully gone.

I don’t really share this mode of thought because it is too undifferentiated; all of the recalcitrant republicans are not unthinking militarists. ‘The Irish News’ referred to all involved as ‘dissident republicans’ but it was certainly more diverse than that expression suggests. Today basic democratic rights are being shredded all too readily, the prospect for socialist advances are very poor in both Ireland and Britain and politics at this time of austerity is favouring the right wing rather than the left wing – just look at the advance of UKIP compared to the abject failures of the socialists to the left of the labour Party."

Perhaps those sects who claim some affinity to the ideas of Leon Trotsky would care to read what the Fourth International Theses on Ireland 1944 said about the struggle for democratic rights,

"By bringing into the clear light of day the full, unimpeachable facts on every case of arbitrary search, arrest and intimidation; by demanding full facilities for inquiry into every case of alleged police intimidation and brutality; by spreading information regarding the unsanitary overcrowded conditions under which political prisoners live; by opposing the farce of the police-influenced Internees’ Appeals Tribunal; and, in short, by making a public display of samples of the British “democracy” being meted out to hundreds of Ulster citizens, a Civil Liberties Council has a revolutionary role to perform."

And there was no mealy mouth equivocation about the national question

"The fundamental tasks of nationalism awaiting the solution of the approaching revolution are: (1) the healing of the sectarian breach; (2) the winning of national independence from British imperialism; and (3) the ending of partition. These form an inseparable trinity. None are realisable as isolated aims in themselves, or possible of attainment except by means of the socialist revolution. Conversely, the socialist movement can turn its back on the problems of nationalism only at the price of prostration before capitalism; for a proletariat divided within itself cannot seize power. National tasks and social tasks are thus inextricably woven together.

"The national question IS a social question and, moreover, one of the largest magnitude. Hitherto, the prevailing tendency has been to regard the intrusion of Orange and Nationalist banners into the arena of the class struggle as a complication of an exclusively detrimental nature to the labour movement; as a plague of ideologies, in fact. Most certainly this judgement holds true under all circumstances so far as Orangeism is concerned. On the other hand, the unsolved national question – which is not at all a religious sectarian issue from the standpoint of the nationalist workers – is not necessarily a brake upon the class struggle but, under favourable circumstances, can act as a dynamo upon it, causing violent accelerations of tempo.

"Finally, the best Irish nationalists will always be Trotskyists; for Trotskyism’s conceptions of international solidarity and socialist co-operation alone correspond to the national needs of the Irish people. An isolated proletarian dictatorship, even assuming it were not militarily overthrown, could not in the long run prevent a resurgence of sectarian disunity; for ideology cannot take the place of bread indefinitely. With the prolongation of hunger and poverty the wheels of the revolution would begin to revolve backwards. It is only within a system of world socialist economy that the unity of the Irish people will become indestructible for all time."(my emphasis)

Almost 70 years on those words still apply. The democratic and the social questions in Ireland are so intertwined that they can not be separated. Any approach from socialists which ignores the continued repression or pays lip service to fighting that repression by passing pious resolutions in union meetings, knowing that nothing will happen, is to betray the working class.

Loyalism and republicanism are not two sides of the same coin-sectarianism.

One is reactionary, pro-imperialist with a strong racist and anti-catholic bias running through it, favouring repression against any democratic forces word wide and taking the side of reactionary regimes world wide. The other is anti-imperialist, favours democratic reform, opposes repression not only in the meeting halls but on the streets, and sees itself as part of an international struggle against tyranny.

Of course it is not a simple black and white analysis. Some Republicans and Republican groups have committed sectarian acts and have been repressive. There are also those within loyalism who hold progressive views on a wide range of issues. Nevertheless the general analysis remains true.

The sectarianism that appeared on the streets of Belfast that night and many other nights over the past couple of years is the direct consequences of the sectarian nature of the state. The northern statelet was set up as bastion and power base for unionism to perform its main role-the defence of British Imperial interests.

While Britain is no longer the power it once was its essential instinct is to always side with Unionism against Republicanism. hence the recent call by the British overlord, Theresa Villiers for Sinn Fein to call off their march in Castlederg. There was no such call over any contentious loyalist/orange/unionist parades.

Nevertheless the current situation holds both dangers and opportunities for progressive forces. Sectarian hatred has been stroked up on both sides both by events and by political organisations. Republicans must resist this sectarianism and avoid doing anything that allows reactionary forces to wipe up hatred. The discipline, and unity involved in the anti-internment march must act as a model for future events. But beyond that there needs to be a coming together of the left with the republican left to map a way forward. While this may seem unrealistic at this moment it is up to the small forces of Marxism in Ireland to advance the correct strategical approach that will allow for the building of a mass labour movement, that is the only force that can complete the national question on the basis of the 1944 Theses.