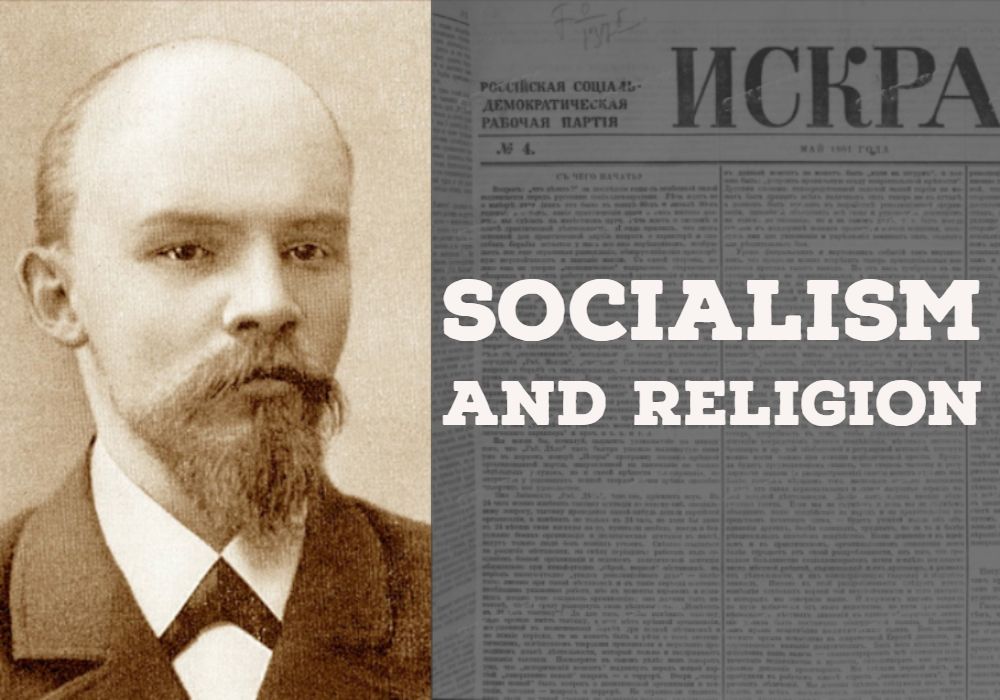 Present-day society is wholly based on the exploitation of the vast masses of the working class by a tiny minority of the population, the class of the landowners and that of the capitalists. It is a slave society, since the "free" workers, who all their life work for the capitalists, are "entitled" only to such means of subsistence as are essential for the maintenance of slaves who produce profit, for the safeguarding and perpetuation of capitalist slavery.

The economic oppression of the workers inevitably calls forth and engenders every kind of political oppression and social humiliation, the coarsening and darkening of the spiritual and moral life of the masses. The workers may secure a greater or lesser degree of political liberty to fight for their economic emancipation, but no amount of liberty will rid them of poverty, unemployment, and oppression until the power of capital is overthrown. Religion is one of the forms of spiritual oppression which everywhere weighs down heavily upon the masses of the people, over burdened by their perpetual work for others, by want and isolation. Impotence of the exploited classes in their struggle against the exploiters just as inevitably gives rise to the belief in a better life after death as impotence of the savage in his battle with nature gives rise to belief in gods, devils, miracles, and the like. Those who toil and live in want all their lives are taught by religion to be submissive and patient while here on earth, and to take comfort in the hope of a heavenly reward. But those who live by the labor of others are taught by religion to practice charity while on earth, thus offering them a very cheap way of justifying their entire existence as exploiters and selling them at a moderate price tickets to well-being in heaven. Religion is opium for the people. Religion is a sort of spiritual booze, in which the slaves of capital drown their human image, their demand for a life more or less worthy of man.

But a slave who has become conscious of his slavery and has risen to struggle for his emancipation has already half ceased to be a slave. The modern class-conscious worker, reared by large-scale factory industry and enlightened by urban life, contemptuously casts aside religious prejudices, leaves heaven to the priests and bourgeois bigots, and tries to win a better life for himself here on earth. The proletariat of today takes the side of socialism, which enlists science in the battle against the fog of religion, and frees the workers from their belief in life after death by welding them together to fight in the present for a better life on earth.

Religion must be declared a private affair. In these words socialists usually express their attitude towards religion. But the meaning of these words should be accurately defined to prevent any misunderstanding. We demand that religion be held a private affair so far as the state is concerned. But by no means can we consider religion a private affair so far as our Party is concerned. Religion must be of no concern to the state, and religious societies must have no connection with governmental authority. Everyone must be absolutely free to profess any religion he pleases, or no religion whatever, i.e., to be an atheist, which every socialist is, as a rule. Discrimination among citizens on account of their religious convictions is wholly intolerable. Even the bare mention of a citizen's religion in official documents should unquestionably be eliminated. No subsidies should be granted to the established church nor state allowances made to ecclesiastical and religious societies. These should become absolutely free associations of like minded citizens, associations independent of the state. Only the complete fulfillment of these demands can put an end to the shameful and accursed past when the church lived in feudal dependence on the state, and Russian citizens lived in feudal dependence on the established church, when medieval, inquisitorial laws (to this day remaining in our criminal codes and on our statute-books) were in existence and were applied, persecuting men for their belief or disbelief, violating men's consciences, and linking cozy government jobs and government-derived incomes with the dispensation of this or that dope by the established church. Complete separation of Church and State is what the socialist proletariat demands of the modern state and the modern church.

The Russian revolution must put this demand into effect as a necessary component of political freedom. In this respect, the Russian revolution is in a particularly favorable position, since the revolting officialism of the police-ridden feudal autocracy has called forth discontent, unrest and indignation even among the clergy. However abject, however ignorant Russian Orthodox clergymen may have been, even they have now been awakened by the thunder of the downfall of the old, medieval order in Russia. Even they are joining in the demand for freedom, are protesting against bureaucratic practices and officialism, against the spying for the police imposed on the "servants of God". We socialists must lend this movement our support, carrying the demands of honest and sincere members of the clergy to their conclusion, making them stick to their words about freedom, demanding that they should resolutely break all ties between religion and the police. Either you are sincere, in which case you must stand for the complete separation of Church and State and of School and Church, for religion to be declared wholly and absolutely a private affair. Or you do not accept these consistent demands for freedom, in which case you evidently are still held captive by the traditions of the inquisition, in which case you evidently still cling to your cozy government jobs and government-derived incomes, in which case you evidently do not believe in the spiritual power of your weapon and continue to take bribes from the state. And in that case the class-conscious workers of all Russia declare merciless war on you.

So far as the party of the socialist proletariat is concerned, religion is not a private affair. Our Party is an association of class-conscious, advanced fighters for the emancipation of the working class. Such an association cannot and must not be indifferent to lack of class-consciousness, ignorance or obscurantism in the shape of religious beliefs. We demand complete disestablishment of the Church so as to be able to combat the religious fog with purely ideological and solely ideological weapons, by means of our press and by word of mouth. But we founded our association, the Russian Social-Democratic Labour Party, precisely for such a struggle against every religious bamboozling of the workers. And to us the ideological struggle is not a private affair, but the affair of the whole Party, of the whole proletariat.

If that is so, why do we not declare in our Program that we are atheists? Why do we not forbid Christians and other believers in God to join our Party?

The answer to this question will serve to explain the very important difference in the way the question of religion is presented by the bourgeois democrats and the Social-Democrats.

Our Program is based entirely on the scientific, and moreover the materialist, world-outlook. An explanation of our Program, therefore, necessarily includes an explanation of the true historical and economic roots of the religious fog. Our propaganda necessarily includes the propaganda of atheism; the publication of the appropriate scientific literature, which the autocratic feudal government has hitherto strictly forbidden and persecuted, must now form one of the fields of our Party work. We shall now probably have to follow the advice Engels once gave to the German Socialists: to translate and widely disseminate the literature of the eighteenth-century French Enlighteners and atheists.

But under no circumstances ought we to fall into the error of posing the religious question in an abstract, idealistic fashion, as an "intellectual" question unconnected with the class struggle, as is not infrequently done by the radical-democrats from among the bourgeoisie. It would be stupid to think that, in a society based on the endless oppression and coarsening of the worker masses, religious prejudices could be dispelled by purely propaganda methods. It would be bourgeois narrow-mindedness to forget that the yoke of religion that weighs upon mankind is merely a product and reflection of the economic yoke within society. No number of pamphlets and no amount of preaching can enlighten the proletariat, if it is not enlightened by its own struggle against the dark forces of capitalism.

Unity in this really revolutionary struggle of the oppressed class for the creation of a paradise on earth is more important to us than unity of proletarian opinion on paradise in heaven.

That is the reason why we do not and should not set forth our atheism in our Program; that is why we do not and should not prohibit proletarians who still retain vestiges of their old prejudices from associating themselves with our Party. We shall always preach the scientific world-outlook, and it is essential for us to combat the inconsistency of various "Christians". But that does not mean in the least that the religious question ought to be advanced to first place, where it does not belong at all; nor does it mean that we should allow the forces of the really revolutionary economic and political struggle to be split up on account of third-rate opinions or senseless ideas, rapidly losing all political importance, rapidly being swept out as rubbish by the very course of economic development.

Everywhere the reactionary bourgeoisie has concerned itself, and is now beginning to concern itself in Russia, with the fomenting of religious strife -- in order thereby to divert the attention of the masses from the really important and fundamental economic and political problems, now being solved in practice by the all-Russian proletariat uniting in revolutionary struggle. This reactionary policy of splitting up the proletarian forces, which today manifests itself mainly in Black-Hundred pogroms, may tomorrow conceive some more subtle forms. We, at any rate, shall oppose it by calmly, consistently and patiently preaching proletarian solidarity and the scientific world-outlook -- a preaching alien to any stirring up of secondary differences.

The revolutionary proletariat will succeed in making religion a really private affair, so far as the state is concerned. And in this political system, cleansed of medieval mildew, the proletariat will wage a broad and open struggle for the elimination of economic slavery, the true source of the religious humbugging of mankind.