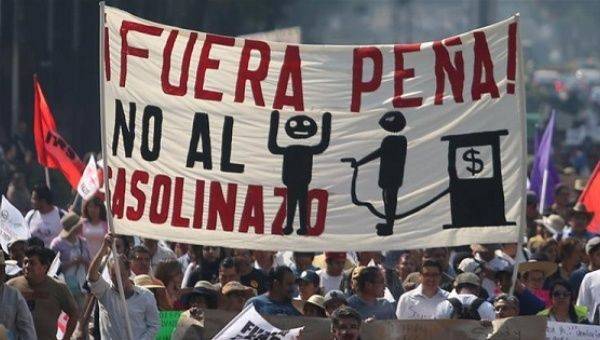 Since President Peña Nieto and his EPN government have implemented energy reforms, which focus on the increase of the price of petrol, there has been ongoing public outcry and nationwide mass demonstrations against it from the beginning of the New Year.

The price of petrol has steadily risen by 180% in the past decade but the latest rise by 2 pesos per litre was like the proverbial straw which broke the camel's back. This increase has had an immediate domino effect of prices being raised in public transport, basic goods, rent and gas for domestic usage. Rice, Milk and Transport companies have all announced price hikes on their products and services.

All of this is occurring with the backdrop of a daily worsening economic situation, increased unemployment and a 60% drop in Mexican buying power over recent decades. This in turn has resulted in the minimum wage being insufficient to cover basic living expenses for working class families and therefore has made the increased price of petrol even more unaffordable.

The government’s feeble and false justifications for this reform is that it is an environmental policy that will reduce private car usage and the price has been raised in line with international pricing. The first reason is absurd and is fooling nobody whilst the second reason is simply untrue. Petrol in the US is now cheaper in fact at $0.55 per litre as opposed to $0.79 in Mexico.

EPN Reforms and the Privatisation of the Oil Industry

The gasolinazo (sudden increase in the price of gasolina, fuel) as aforementioned is part of Peña Nieto’s energy reforms that fit into more wide reaching structural reforms which include the recent and contentious educational reforms. His government has carried out a relentless campaign to do away with any remaining vestiges of the conquests of the Mexican revolution.

The energy reform was approved in December 2013 by a council consisting of PRI, PAN and the Green Party (the most significant right-wing political parties in Mexico) and is designed to balance government income by maintaining tax on oil production as well as a VAT of 26% on the sale of petrol. The reform not only seeks to privatise PEMEX (the State oil company), which will be divided up amongst the oil oligarchy, but it also allows for the private exploration and extraction of oil in Mexican territory. PEMEX is reported to have potential annual profits of $100 billion which are now open to exploitation from domestic and foreign capital. Oil giants such as BP, Chevron, Total and ExxonMobil are staking their claim as well as Carso Gas and Oil of which Carlos Slim (the second richest man in the world) is a major shareholder. Other beneficiaries of this reform include businesses connected to ex members of PAN and PRI which points to the cronyism of deeply entrenched governmental corruption.

EPN propaganda argues that PEMEX is unproductive and incapable of modernising and boasts that privatisation will encourage greater private investment and increased employment in the private sector. What they choose to leave out is that these vast profits have not been reinvested back into the production of oil. In fact no new oil refineries have been built since 1979. The strength and profitability of the state petrol company has been neglected for decades by politicians seeking to make short term gains by selling it off. As a result, with no government regulation or caps on pricing, private companies are free to keep raising the cost of petrol to the detriment of the poorest members of society.

The privatisation of PEMEX, which was nationalised by the government of Lazaro Cardenas in 1938, is also rightly seen as part of the sell off of the country's assets to foreign powers, a politically sensitive issue in Mexico.

A Spark for Discontent

Prior to the gasolinazo the working class movement in Mexico was at a low ebb. The country last witnessed large scale spontaneous protests in 2014 to protest the disappearance of 43 student teachers in Ayotzinapa. The disappearance of those at Ayotzinapa as well as numerous other cases of disappearances and the bloody epidemic of female homicides, known as feminicidios, have bred a culture of insecurity and fear. Added to that are 30 years of government corruption and cuts which have steadily caused a build-up of tension under the surface.

The tension has erupted with the gasolinazo as a wave of rage and indignation sweeps the country. The issue is hotly debated on social media which has poured out into the streets in the form of spontaneous protests that are undeterred by the fearmongering government backed looting. January 2017 marks a new stage in the class struggle as a potentially uncontainable force has been unleashed in the hundreds of thousands of protesters surprising and scaring politicians. Not only are the masses on the streets again but the movement is now on a quantitatively higher level as the conclusion is being drawn that the energy reforms are yet another attack on the working class.

National Development of the Movement

To elaborate, social media outrage is being expressed concretely in the form of organised protests and marches. As always the peasants, workers and youth are directly affected and taking action. However, new layers of the working class are also coming out to protest including housewives and mothers as well as non-unionised workers.

Up and down the country one can witness various forms of agitation, a few of which shall be highlighted here. In the capital Mexico City on 9th January, there was a march of 40,000 protesters. In Nuevo León 20,000 protesters occupied the main square of the state capital. In Ixmiquilpan in the state of Hidalgo a roadblock has been in place since 3rd January that has withstood police repression despite the death of two young men injured by the police's live rounds. In Puebla one march started as 4,000 and grew to 20,000 filling the main streets in the centre of the city. In many other states there have been prolonged roadblocks, taking of city halls and the burning of government buildings. In Baja California Norte, a traditionally peaceful state, there has been a roadblock to the PEMEX facilities since 2nd January and protesters have defended themselves with rocks against the use of teargas and rubber bullets by the police to disperse them.

Amidst the protest action there has also been a severe bout of looting. This has created an atmosphere of fear amongst the activists as expected and the threat of militarisation in order to bring the chaos to heel. Not surprisingly, the government is deploying agent provocateurs to cause panic and justify the use of military force against the activists to whom this crime is attributed by the media. Looters are being offered 800-1000 pesos to conduct their activities and are allowed to keep what they take. Groups of youths in balaclavas are targeting working class neighbourhoods where there is a noticeable lack of police presence and the army have been instructed only to patrol rather than intervene. So far a total of 79 shops have been ransacked prompting ANTAD, the shopkeepers’ association, to call for military intervention.

What is needed to go forward?

One of the features of the movement is its largely spontaneous character. Although there are left-wing groups of significant size in Mexico, they have provided no leadership nor coordinationl to the movement. The largest trade union CNTE (the radical current within the teachers’ union SNTE) is weakened from agitation against Peña Nieto’s educational reform. Some parties want to delay justice until the elections and place faith in electoral victory. The Zapatistas of EZLN are putting forward an indigenous candidate for the 2018 elections which is deemed as merely a symbolic act. Finally, Morena (the left-wing opposition party) wants to wait until the 2018 elections in order to replace Peña Nieto and the EPN. But this issue cannot be left unresolved until then and certainly cannot be resolved by parliamentary activity.

It must also be acknowledged that marches and protests alone are not enough to overthrow governments. The danger is that a succession of daily demonstrations without any clear focus and no escalation of the protests will eventually lead to tiredness and the fizzling out of the movement. As we have learned from the history of revolutions unified and coordinated action is required to organise and carry out a general strike nationwide. This will require workers’ assemblies which should be open to all layers of the proletariat to participate. Furthermore, the working class of Mexico lacks a genuine revolutionary party to lead the movement to its necessary revolutionary conclusions.

The comrades of the Mexican section of the International Marxist Tendency, La Izquierda Socialista, have been intervening energetically in the movement, taking the initiative to call for an assemblky to coordinate the protests. This has now been taken upo by the CNTE teachers' union and other organisations. The comrades have a proposed programme which is inclusive of all the issues that concern those involved in the protests which is as follows:

It is not clear how far this movement will go. Whatever its immediate outcome it reveals clearly the enormous accumulated discontent in Mexican society as well as the willingness of working people and youth to engage in direct action in struggle for their rights.