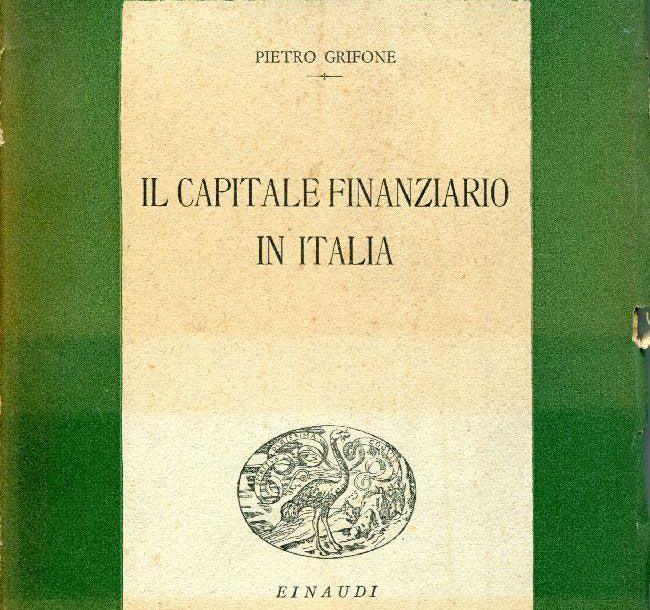 When the 1929 Crash broke out it affected the Italian economy dramatically. Italy had just been through a serious monetary crisis, from which it had not yet recovered when the world crisis broke out. In this situation the capitalists desperately turned to the State for help.

As Pietro Grifone explains in his work, Finance Capital in Italy (1940 Italian edition):

“The intervention of the State, as supreme regulator of national economic activity is, however, more and more called for. The protagonist of this transformation of the Italian economy into a State monopoly economy is finance capital, which having realised that the required discipline in production cannot be achieved if not imposed by the will of the state, became an active promoter of state intervention in the economy.”

The same author goes on to explain that as there was no layer within the Italian bourgeoisie that had the cohesion and the power to impose itself; this role fell to finance capital, the exponents of which saw salvation in state intervention. The Italian bourgeoisie, although obviously much more developed than today’s indigenous Chinese bourgeoisie, for example, nevertheless was a relatively weak national bourgeoisie, having arrived on the scene of history quite late, when the world economy was already dominated by major imperialist powers such as Britain and France. Because of this weakness, at a time of acute crisis it was forced to turn to the State.

The banking crisis that erupted in 1931, starting with the collapse of the Austrian Creditanstalt, quickly spread across the whole of Europe, leading to a collapse of the pound. In Italy this meant the banks saw credit from abroad suddenly drying up, provoking a banking crisis in the country, which only the state could do anything about. Thus a massive bank bail-out was put in place.

From here onwards the state began to assume a huge role in the economy. At one point the state controlled 70% of the banks in Italy. All this culminated in the first few months of 1933 in the creation of the IRI (Institute for Industrial Reconstruction), a kind of State Enterprise Board, whereby the state took upon itself direct responsibility for production in several key areas.

One example of how the state intervened was the way it stepped in to save the mining industry. The Banca Nazionale del Lavoro (a para-statal bank) was ordered to provide loans for the marble quarries. The same happened in lead and zinc mining, as well as coal. The oil companies saw the state intervening. The list of companies in which the state was forced to intervene is almost endless. Almost the whole of heavy industry ended up under state control, as did the major shipping companies, the telephone company, etc. Many banks faced bankruptcy and only survived through direct state takeovers. Italian finance capital became fully aware that its only salvation lay in the state that could provide the back-up for failing banks.

As Grifone puts it, Italy had entered the “epoch of State Monopoly Capital.” He explains that in order to achieve the process of accumulation, concentration and centralisation of capital – and as this could not be achieved through normal channels of domestic and international competition – support from the state was required.

“Small and medium industries and internal trade are left to private initiative, but trade as a whole, banking and large industries, especially the arms industry, ‑ given that it was of such important public interest – are placed under the direct control of the State. The latter exercises this control through various means, depending on the circumstances, directly running the companies, or via its state holding company, the IRI, or by setting up joint ventures where State capital collaborated fruitfully with private capital.”

Thus we see the emergence of large state controlled companies, in sectors that go from mining to insurance, from steel production to textiles. Where private capital is not prepared to step in, the State takes over.

Accompanying this process is centralisation and state-isation of the banking system. Some smaller banks are allowed to go bankrupt, while others are fused together into larger banks. Through this system the state assumes the power to direct investment where it deems it is necessary.

Giuseppe Restifo, in an essay under the title “Economic policy” [of fascism] published in a collection of essays in a book, “Fascism, politics and social life” (October 1980, Italian edition] refers to the way capitalism was restructured in Italy after the 1929 crisis as a kind of “monopolistic planning”.

Emilio Sereni, an Italian Communist writing in “Lo Stato Operaio” [the Workers’ State] in May 1936 states the following: “Today… in Italy 80% of imports and 60% of exports are under the control of state-monopoly organisations.”

He goes on to explain that the three major Italian banks, the Banca Commerciale, Credito Italiano and Banco di Roma, were declared public banks. He adds that these banks directly controlled 70% of all the joint stock companies [i.e. those quoted on the stock exchange].

Thus Mussolini was able to boast that he controlled three quarters of the Italian economy. These are the words of Mussolini on May 26, 1934: “Three-fourths of Italian economy, industrial and agricultural, is in the hands of the state.”

Of course this is not to be taken literally as the state actually owning directly three quarters of the economy. Trotsky actually refers to Mussolini’s statement in the Revolution Betrayed and explains that there was a difference between Mussolini’s policy and what existed in the Soviet Union. Mussolini’s policy was not aimed at expropriating the capitalist class but saving it in times of crisis.

Italy had in fact become the country after the Soviet Union with the largest public sector in the world. This situation continued well beyond the fall of fascism. In fact after the Second World War the Christian Democratic-led governments did not unravel any of this, but actually built on it, incorporating more companies into the IRI. For example in 1962 they nationalised the electricity generating industry to create ENEL, the national electricity board. They also invested in huge projects such as the Taranto steelworks, to this day the biggest steel plant in Europe.

Right up until the early 1990s the state in Italy controlled 70% of the banking system and large sections of the economy. Figures for public ownership are not always precise, but calculations go from a minimum of 35% to up to 50%.

The Italian economy in the period that goes from the post-1929 situation right through to the 1990s, shows that you can have a capitalist economy with a dominant state sector. A large public sector does not automatically determine the nature of the system. Today in Iran 80% of the economy is state-owned, but no-one in their right mind would define Iran as “socialist”.

The state under Mussolini intervened not to abolish capitalism but to save it. But if we look at many aspects of the Italian economy under Mussolini we see some striking similarities with the economy in China today. Small and medium scale industries were in private hands. The state controlled most of the heavy industry. It also directly controlled the banking sector and gave it orders as to who they should grant loans to. Thus failing companies were kept alive and new ones were also built.

Of course, any historical analogy has its limits. In China we have seen the old centrally planned, state owned system breaking down, with a gradual move towards capitalism. In Italy we had a capitalist system in place already prior to 1929 with a national bourgeoisie in power, albeit a weak one. In Italy the state intervened to save capitalism that had entered into crisis. In China the bureaucracy of the old deformed workers’ state has pushed for the introduction of private ownership in some sectors and in those strategic sectors it wishes to maintain under state control, it has introduced capitalist methods, such as the profit motive, competition, etc., in order to maintain its own privileges while changing the economic base upon which the state rested.

Having said that, there are some striking similarities between the two systems. The main point is that the economy under Mussolini, although clearly capitalist, depended very heavily on the state, so much so that the state was actually guiding its whole development. It is yet another example of a weak, relatively underdeveloped economy requiring a massive state input for it to survive in the world market.