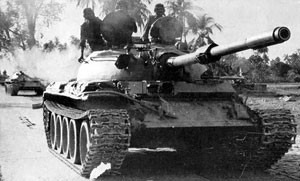 Air Commodore A. K. Khandker acted as witness on behalf of the Bangladeshi Armed Forces. The ‘Instrument of Surrender’ document signed in recognition of the defeat and transfer of power read as follows: “The Pakistan Eastern Command agree to surrender all Pakistan Armed Forces in Bangladesh to Lieutenant-General Jagjit Singh Aurora, General Officer Commanding in Chief of Indian and Bangladesh forces in the Eastern Theatre. This surrender includes all Pakistan land, air and naval forces as also all para-military forces and civil armed forces. These forces will lay down their arms and surrender at the places where they are currently located to the nearest regular troops under the command of Lieutenant-General Jagjit Singh Aurora.” Subsequently, around 93,000 Pakistani troops and officials were taken as prisoners-of-war by the Indian Army; the largest number of POWs since World War II.

Thousands of people celebrated at the ceremony in central Dhaka marking the liberation of Bangladesh and the victory of the independence war that began on 25 March 1971. In India there were triumphant exaltations amongst the ruling classes and the military’s top brass. Some generals wanted to ‘finish off Pakistan’ and have the next day’s Lunch in the grandeur of the Lahore Gymkhana club then at Lawrence Gardens in pre-partition Lahore, so famous and longed for for its sumptuous food and parties amongst the subcontinent’s elites. However Indira Gandhi was too crafty and cunning to have committed such a blunder that would have provoked another revolutionary upheaval leading to the overthrow of the edifice of the rulership of her class. As is usually the case, revolution erupts in the aftermath of war. She saved the system but just months after this ‘historic victory’ there was a revolt of the Indian proletariat that ultimately led to her overthrow. Indira the ‘Goddess of war’ and the victorious heroine of 1971 did save capitalism by this war strategy but had to part with her regime.

Meanwhile in Pakistan, a sombre state set in with the oppressed masses utterly confused and bewildered in the aftermath of the gigantic events that had triggered the unprecedented turbulence of revolution and counter-revolution. Apart from the military strategies and other blatant mistakes of West Pakistan’s ruling classes, the debate in Pakistan mainly focuses on episodic and superficial features of the defeat. Whilst it’s true that the end of East Pakistan and the creation of Bangladesh once more brought into question the relevance and validity of the two-Nation theory, nevertheless an examination from the people’s perspective or a class analysis remains very rare. In reality the war, repression, genocide and the defeat with separation of East Bengal were part of another strategy of imperialism and the ruling classes of India and Pakistan to divert, distract, derail and defeat the revolution of 1968-69. During this 39 day period the ordinary masses of Pakistan from Peshawar to Chittagong were, for the first time, united on a class basis - the only real and genuine relation of the toilers on which to unite and fight for their collective emancipation. The breakup of Pakistan also unambiguously demonstrates how world imperialism and the national bourgeoisie will go to calamitous extremes to preserve the rule of their system of capitalist exploitation.

History witnessed in those testing times the occupations of factories by the workers, the seizure of land by the poor peasants, the awakening of women and the valour of the students and youth, which fed into a revolutionary situation in both East and West Pakistan. The delay in the revolution diverted the movement on class struggle along national lines. It was the disastrous role of the Maoist and Stalinist left leaders in East Bengal that led to this disastrous nationalist digression of the social revolution. The Indian and world powers catapulted Mujib along with other bourgeois Bengali leaders to the helm. War euphoria was whipped up, which led to a ferocious civil war and the separation of Bangladesh. However in the aftermath of the Pakistani Army’s surrender in December 1971, a new conflict began in Bangladesh. In the areas lost by the Pakistani Army in East Bengal during the national liberation struggle, a form of soviets developed. The invading Indian army in connivance with the reactionary bourgeois nationalist forces of East Bengal tried to crush them.

It is significant that during this time the seventh fleet of the American Navy was anchored in the Bay of Bengal with marines on board. American imperialists feared that the Indian Army might fail to crush the soviets, which were mainly controlled by the Mukti Bahini and the socialist JSD (Jatyo Samajtantrik Dal), the left wing of the national liberation movement. Had the social revolution gone ahead in East Bengal, it would have been almost impossible to prevent it from spreading to West Bengal, where the left was already strong and where society had already become radicalised. In the post-war, crisis-ridden subcontinent, a red, united Bengal with its traditions of uprisings and protests would have led to revolution throughout the Indian subcontinent. This would have threatened not only the rule of capital in the subcontinent, but its impacts would have had devastating repercussions for imperialism on a world scale. The advent of the Seventh Fleet to the Bay of Bengal was not accidental. The Indian bourgeois’ state ensured that Bengal remained divided into East and West mainly on a religious basis.

In West Pakistan, the defeated, humiliated and shattered Pakistani army was in no state to resist a new mass uprising. There were uprisings in several garrisons and General Gul Hassan rushed from one cantonment to another to put out the fires and quell the revolts of the mainly young officers. The advanced workers had lost the majority of their supporters and were exhausted and bewildered. Bhutto went on a spree of radical reforms calculated to diffuse any new upsurge, but he was destined ultimately to failure in the crisis ridden capitalist system that was suffering from the first post-war recession of the world economy in 1974.

Pakistan was created not as a nation state but as a state comprising of several nations. This is crystal clear from the alphabets that its name is made up from. The failure of the nascent Muslim capitalist class to create the modern industrialised society it had dreamt of led to the decay of the state and the system. They got their independent market and yet such was the economic and technological incapacity of this bourgeoisie that they failed to complete the task of creating a new nation. National exploitation continued along with ever crushing class exploitation. Fundamentally the revolt began on the explosion of the class contradiction in 1968. However what was lacking was a Leninist party that could have led the revolution to a socialist victory. East Pakistan’s national liberation remained incomplete due to the failure to unite Bengal and to solve the basic socio-economic problems of the oppressed masses.

Almost four and a half decades later the situation in Pakistan has only worsened. The ruling classes have not and cannot learn any lessons. The political commentators and the intelligentsia of the ruling elite parrot the same old rhetoric of shallow patriotism and hollow sovereignty. Meanwhile class and national exploitation go on unabated. Massive upheavals and gigantic events impend on the horizon once again. The masses cannot tolerate this misery and deprivation much longer. The most important lesson to be learnt is to unite and take the class struggle to the finish. Rather than seceding, the movements of national liberation have to be linked and united with the class struggle. Such a mass revolutionary movement can overthrow this coercive system. In East Bengal this failed to take place and capitalism continues to viciously exploit the Bengali workers and peasants in Bangladesh. In Pakistan another 1968- 69 can emerge on a higher plane and its victory on a class basis can lead to the end of the misery and deprivation of the more than one fourth of the human race that inhabits Southern Asia.