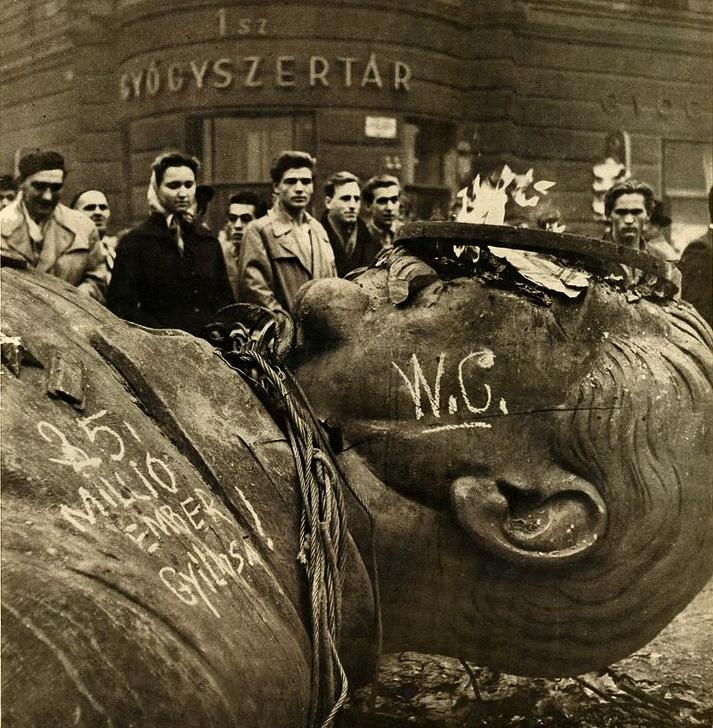 Hungary is in uproar as the 50th anniversary of the 1956 uprising approaches. Recent events make all the preparation for the celebrations that much more poignant as riots, continuous demonstrations and electoral irregularities have created a heightened level of tension in the country. In the general confusion that characterised recent events in parliament since 18th September, at the ballot box on 1st October and on the streets many comparisons were made with the events of 1956, some even going so far as branding the recent disturbances as a revolution, with one speaker in front of Parliament recently calling for an armed rising on 23rd October. Superficially it is easy to mistake demonstrations, even rioting, with a revolution and in the generalised ignorance about the events of October 1956 many have gone along with it.

However, as Leslie Bain, a journalist and eyewitness of the events of 1956 once said: "No event in recent history has been so much lied about, distorted and besmirched as the Hungarian Revolution". Fifty years on, the lies of the past have been added to by confusion due to the passage of time, the fading memories of eyewitnesses, coloured by all the events since, not to mention the new lies, which now serve a new elite, not a Stalinist, but a capitalist one. It is very sad to see how today's Hungarian youth has very little chance to find out what exactly happened in 1956 faced with this torrent of lies and distortions. It is the duty of every Marxist and Trotskyist to make sure that the history of the 1956 Hungarian Revolution is told truthfully and what is more, from the point of view of the working class fighters that were the backbone of that revolution, who with their unerring instinct moved towards a political revolution that would establish a free, independent, democratic workers' state, devoid of occupying troops, bureaucrats or a standing army ‑ society based on workers' councils as popular organs of the people's power and the executive arm day to day running society. [For a more detailed account read Hungarian revolution 1956, forty years on]

The 1956 revolution was one of several that arose from the extremes of oppression in Central and Eastern Europe in the late 1940s and 50s. But it was the only one that posed the question of both economic and political power by the masses in a stark manner, the only one where the freedom fighters established a beacon for the world revolution showing that Stalinism can be beaten and workers' power is a reality.

In the course of the events that started on 23rd October 1956 all these were either put into effect or were in the process of being established. The Workers' Councils, which were soviets in all but name, were in session most of the time during the revolution. They elected their officials and representatives and duly recalled them as soon as they felt that they did not represent the will of the majority. Duties were rotated by necessity, during the two massive general strikes, during the fighting and in most other aspects of life. As for no standing army: 1956 is a classic case study of the ability, willingness and preparedness of ordinary people to defend the gains of their revolution, if necessary by arms. Mark Molnar, an ex-officer who went over to the side of the revolution and fought with the workers of Csepel, described the efficiency of the fighting machine in the trenches, streets and factories of Csepel, an industrial working class stronghold of Budapest. "The routine was simple. Each man spent eight hours fighting, eight hours working in the factories manufacturing shells and guns, eight hours sleeping at home. From the very first moment I arrived, I was allotted volunteer medical students and I knew just where to put my casualties." The organisation, he felt "was far better than it had been on the Hungarian general staff, I had nothing to do but fight."

These and many other aspects of the events of 1956 are hardly known today. Publications are few and far between; the new right has hijacked the heroes of 1956 and painted them with the colours of the extreme right. Red and white striped flags adorn many demonstrations, recalling the House of Árpád and the early days of Hungarian Christianity. These representations make a change from the Stalinist lies, that called the freedom fighters reactionaries who wanted to re-establish capitalism or from those spread by the Western media, which saw no socialist content, only a move to get rid of the occupying Soviet Army in 1956. But whatever is their slant, their lies are still lies.

The socialist government of Ferenc Gyurcsány is planning a long series of spectacular events this October. Between 24th October and 4th November the square in front of Parliament will be reserved for official celebrations. Hundreds of people will receive "Heroes of Freedom" medals and the Prime Minister will make a ‘Freedom Declaration' in Parliament. Foreign Heads of State will be invited to witness the inauguration of the 1956 Memorial in City Park and the celebrations will go on until 4th November when the Day of Remembrance and Mourning will commemorate the return of the Soviet troops to put the revolution down.

This is all great, but when an awkward journalist asked Emese Danks, the PM's spokesperson, about how they are going to clear the protesters from in front of Parliament, she fudged the answer and quickly changed the subject. She, along with all officialdom will do anything to hide the real meaning of 1956 by drowning it in official events like raising flags and singing of anthems.

It is left to those of us who understand the real meaning of those heroic days 50 years ago to spread the word not only about who the real heroes were, but what their sacrifice compels us to do today. Any Hungarian who wants to honour the memory of the dead of 1956 should ignore the hypocrisy of those official celebrations and should instead look into the type of society the working class heroes of ‘56 tried to set up and fight for the same.

It is true that there is a great amount of disillusionment in Hungarian society today. Nobody wants to go back to the oppression that Stalinism represented, the rule by a bureaucratic elite that appropriated a big percentage of the nation's wealth and ruled with an iron fist to keep its privileges at all cost. But it is increasingly becoming clear that the capitalist system, which engendered such tremendous hopes in Hungary in the early 1990s, is also a system full of inequality and even a degree of oppression. As the vast majority of the population of Hungary sees no alternative, some will meekly accept the public expenditure cuts, reductions in wages, the social wage and higher taxes on wage earners. Even though a current publication of the Hungarian Rich List confirmed that while most people are looking forward to belt tightening, the 10 richest Hungarians very nearly doubled their wealth in the last 12 months. At the same time the top 200 companies have had their pre-tax profit increase by over 22% with a 2.7% reduction in the workforce. This creates enormous tension and frustration. This is what is pushing some young (and not so young) people towards the extreme right and a lot more people into depression and suicide. It will not be long before it will become clear to all, including those who are still willing to give this system the benefit of the doubt, believing that if only we could "balance the books" everything will be all right at the end, that their sacrifice would have been for nothing. It would have only made the owners of Hungarian industry - the multinationals ‑ of the Hungarian Banks and their shareholders richer. It would not have done anything to better the living conditions of the vast majority of Hungarians.

It will not be "all right at the end". It will only get worse and worse until people stand up and fight for better wages, better working conditions, a better social wage and a social system that spreads out the wealth in society equitably, "from all according to their ability, to all according to their needs". In other words: for socialism. There is no alternative. The heroes of 1956 knew that and that is why they put into their demands the following:

All these demands show clearly that the society they aimed for was one based on socialism, but with democracy and freedom added. In other words, no to Stalinism, no to capitalism and yes to socialism and workers' democracy.

Many Hungarians today look on the demonstrators in front of Parliament and the TV building as a rabble, partly because there is a hooligan element and an extreme right wing involvement. But there is also another reason: because these people are not really representative of the public at large. There is no popular uprising in progress and one should ask why not? After all there is a governmental crisis and a very serious austerity programme in the offing. There should be a popular uprising! However, an uprising or a revolution may start with what the masses are against, but it will run out of steam very quickly once they cannot find something that they are for.

There needs to be a force that will re-establish the legitimacy of the ideas of Marxism. The ideas that drove the heroes of '56 were: common ownership of the means of production, distribution and exchange, but without bureaucratic deformations, without the bureaucracy, the oppression and the one party totalitarian state.

XXIst century Hungary has the traditions, the culture, the belief and the fighting spirit to finish now what the heroes of '56 started.

Let's get rid of not only Gyurcsány with his property tax, two-tier health service, etc, but the system he represents!

Let's get rid of the multinationals! Take industry, the service sector, culture, education, health and all that makes for civilized living into our own hands!

Let's get political power into the people's hands! Let's establish popular organs based on direct democracy and recall of all officials who should be on no higher salary than the people they represent!

Look at the fall of Stalinism! A few years before 1989 nobody would have believed that it would fall to pieces the way it did. People's power was the force behind that.

We can do it again! This time let us get back what successive governments have sold off for a song ever since 1990! We can run society! We can share the wealth equitably and then we can show the world that the heroes of 1956 did not die in vain!