Brazil
Share
Tweet
On Wednesday Alan Woods spoke to 200 workers at the occupied CIPLA plant in Joinville, Brazil. He was invited to speak on Workersâ€™ Control and the Struggle for Socialism. 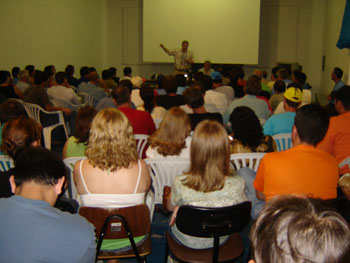 On Wednesday 6th December, 200 workers, delegates and shop stewards from CIPLA and other factories in Joinville, attended a meeting in the CIPLA factory, in which Alan Woods spoke on the subject Workers' Control and the Struggle for Socialism. There was a lot of interest among the workers, who were a mixture of young and old, men and women.

In his opening remarks, Alan explained how all the perspectives of the capitalists after the fall of the Soviet Union had collapsed, leaving a world ravaged by war, unemployment, poverty, terrorism, instability and oppression. He pointed out the enormous growth of exploitation and the concentration of capital and the intolerable and ever-increasing gulf between rich and poor in all countries.

He explained that in all countries the percentage of the national income represented by Capital (profits) had reached record levels, and that the share of the working class (wages) had shrunk to historically low levels. This was the real "secret" of the present boom. "This is a boom at the expense of the working class", he said.

He went on to point out that in the USA, workers are producing one third more than ten years ago, but wages had hardly increased and by some estimates had actually fallen. At the same time he pointed to the obscene increase in wealth at one extreme, while Hurricane Katrina revealed the existence of an underclass of millions living in Third World conditions in the richest country in the world.

On a global scale, the situation was far worse. According to the figures of the United Nations, 1.2 billion people are living below the poverty line, on less than two dollars a day. Of these, eight million men, women and children die every year because they do not have enough resources to stay alive.

"The worst thing is that all this is quite unnecessary," Alan said. "The discoveries of modern science and technology are more than sufficient to solve all the problems of humankind, providing they were at the service of a rational economic system. There is no need for anyone to die of starvation when farmers in Europe and the USA are being paid huge subsidies not to produce food. The problem is not lack of resources; the problem is that the productive forces are run for the profit of a few, not for the needs of the many." 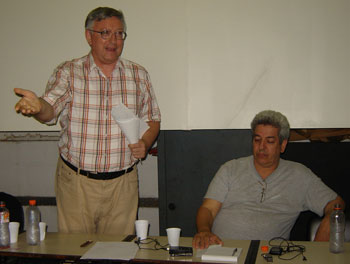 Alan went on to expose the unprecedented concentration of capital on a world scale. "Just take this year alone. In the first quarter there were mergers and acquisitions in the USA with a total value of ten billion dollars a day. In a 24-hour period, on the 19-20th November, the figure had risen to 75 billion. The total for 2006 must now exceed the record figure of 3.3 trillion dollars recorded in 2000.

"The whole of world trade is now in the hands of no more than 200 giant monopolies, mostly based in the USA. And this process of monopolization does not signify an increase in productive activity. Very often, the capitalists of one monopoly take over another company only to close it down. I believe that has happened frequently here in Brazil ("that's right!"). In fact, a US monopoly offered a large sum of money to buy Interfibra (an occupied factory linked to CIPLA) only to close it down [Serge Goulart explains that the workers drew up a deal stipulating that the US company could not close the plant for 15 years, whereupon the "generous" offer was swiftly withdrawn.]

"Even when they do not close the factory after a merger, they inevitably lay off thousands of workers." Even worse, in most cases, the capitalists raise the money for these mergers by taking out credit, since interest rates are low at the moment. This exposes the parasitical nature of the whole procedure.

"They are like cannibals devouring each other. The fate of these workers, their families and communities is a matter of complete indifference to them. They close factories as if they were matchboxes," Alan said. 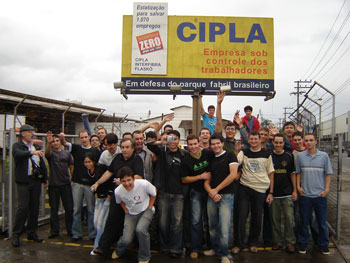 Proceeding to the question of workers' control, Alan praised the role of CIPLA, which he held up as a model of how to meet the threat of factory closures. He particularly stressed the vital importance of the proposal to reduce the working week to 31 hours without loss of pay. "This is an example for all workers to follow!" he said, but then he issued a warning: "It is not possible for CIPLA to succeed in isolation. It is not possible to create an island of socialism in a sea of capitalism. In order to succeed, you must take the struggle outside CIPLA, take it to every factory, to every trade union branch, to every branch of the PT, and organize a fight for the nationalization of the land, the banks and the big industries. On that basis it will be possible to organize a socialist plan of production under the democratic control and management of the working class. That is the only way forward, for Brazil, Latin America, and the world."

Alan's speech, which was ably translated by Serge Goulart, was enthusiastically received by the workers, who continued to comment on it after the meeting.