On July 2, Alan Woods appeared on Venezolana de Televisión, Venezuela's main state-owned TV channel, interviewed by Vanessa Davies on her well-known programme, "Contragolpe", where he explained his views on the FARC in Colombia. Yesterday he was invited by president Chavez to a caravan with the revolutionary people in Nueva Esparta.

Alan Woods on Venezuelan TV: “The only force which can defeat the Colombian oligarchy is the people”

On Wednesday, July 2, Alan Woods was the guest on Vanessa Davies' programme "Contragolpe" ("Fightback") on Venezolana de Televisión, Venezuela's main state-owned TV channel. "Contragolpe" is one of the programmes with the highest ratings of Venezuelan TV (watched particularly by the supporters of the revolution). Vanessa Davies is one of the most respected journalists in the country, and received one of the highest votes in the elections for the national leadership of the PSUV. 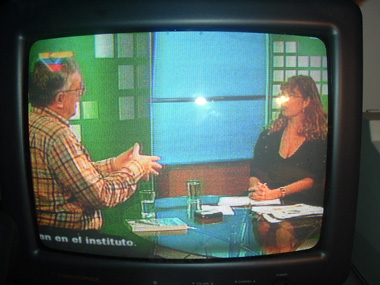 The first part of the interview centered on the news of the day: the rescue of Ingrid Betancourt and other FARC hostages on the part of the Colombian government and the subsequent media campaign organized by the Colombian oligarchy and imperialism internationally. They are capitalizing on it politically and using it to present as democratic the extreme right-wing government of Alvaro Uribe.

Alan started by explaining: "The first thing that I want to make clear is that, as a Marxist, my sympathies are always with the oppressed and the exploited and against the oligarchies wherever they are from. I am particularly against the Colombian oligarchy which uses particularly brutal and repressive methods against the people. I have my criticisms and differences with the FARC, but I cannot share the kind of ‘condemnation of terrorism' expressed by the US government. The biggest terrorist in the world is none other than George W. Bush." 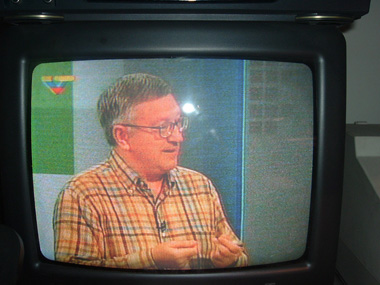 Comrade Alan explained how the struggle against the bourgeois state on the part of a small group of guerrillas isolated from the masses, far from achieving their aim of defeating the oligarchy, has allowed it to strengthen itself and "turn the country into an armed camp". Alan defended the need to struggle against the oligarchy and underlined that this had to be done by basing oneself on the masses. He also stressed that this point of view has nothing to do with pacifism and that what he was talking was about mass struggle: "I defend the arming of the people, also here, in Venezuela."

Regarding Plan Colombia, Alan described it as a fraud, the real aim of which is, first of all, to try to smash the guerrillas and at the same time to strengthen the Colombian army against the Latin American revolution, and particularly the Venezuelan revolution. The British Marxist explained that the Venezuelan revolution is an inspiration to millions of workers and youth all over the world. But, as he has been insisting in every meeting of his Venezuelan tour to launch the book Reformism or Revolution. Marxism and Socialism of the 21st Century, he warned that "in Venezuela there is a revolution but it has not been completed. And one cannot carry out half a revolution". Alan stressed the need to nationalize the banks, the land and the big industries under workers' control, and to democratically plan the economy and complete the revolution, as the only way of solving the problems of the masses. He also made an appeal to all revolutionaries to build the PSUV and defended the need to strengthen it ideologically with the ideas of Marxism.

After the interview with Vanessa Davies in VTV, which had a wide audience, on Thursday, July 3, comrade Alan Woods had planned to attend a number of meetings organized by PSUV candidate for governor, Adán Chávez, in Barinas. However, a last minute call from the presidential palace informed him that president Chávez wanted to invite him to an event in Nueva Esparta (Isla Margarita). An appointment was made for 8am on the presidential plane to fly to the island. President Chávez, as he explained to Alan later, had heard of his presence in Venezuela as a result of his appearance on Vanessa Davies' "Contragolpe". 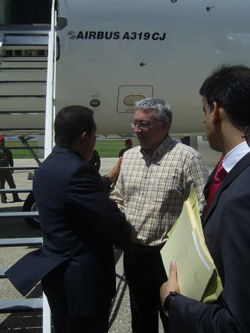 After a forty-minute journey, the presidential plane arrived in Margarita. It was received officially at the airport by foreign affairs minister Nicolás Maduro, communications minister Andrés Izarra, and several civilian and military authorities. A contingent of the armed forces with a music band and a large number of rank and file members of the PSUV with red flags were also there to greet the president. As he stepped off the plane, comrade Alan was greeted by Nicolás Maduro and Andrés Izarra. Minutes later, president Chávez descended from the plane, greeting comrade Alan in the first place and exchanging a few words with him about the nationalisation of Sidor and other companies. He also mentioned the book Reformism or Revolution, making a complimentary comment. Turning to Nicolás Maduro, he said: "He has smashed Dieterich! Alan has a very sharp sense of humour". He said that he thought that the section called "Worms and butterflies" was particularly funny. Then he was introduced to Carlos Rodríguez, a leading member of the Venezuelan Revolutionary Marxist Current (CMR), and Chávez replied: "Long live Marx! We need him more than ever!"

After greeting the heads of the delegation at the airport, the presidential procession went to the Hotel Hesperia in Margarita. The journey, which lasted 20 minutes, was by car, amidst a mass of workers and PSUV members with red T-shirts who were greeting the president. Chávez was in Margarita to attend the VII Gathering of Information Ministers of the Movement of Non-Aligned Countries. The meeting was introduced by Cuban Foreign Affairs Minister Felipe Pérez Roque, who spoke about the "media tyranny" that countries that attempt to throw off the yoke of imperialism are subject to. Then Chávez spoke for two and half hours addressing the ministers and officials gathered. In a fiery speech, Chávez attacked imperialism and capitalism and said that socialism was the only solution to save humanity. During his speech he mentioned comrade Alan on five occasions, every time he referred to Marxism and nationalisations: "Here we have Alan Woods, from the International Marxist Tendency. Marxism has been brought back to life!". He mentioned that he had seen Alan's interview with Vanessa Davies the previous evening: "Alan made some criticisms, which I took note of. From a Marxist point of view and I have great respect for Marxist opinions". 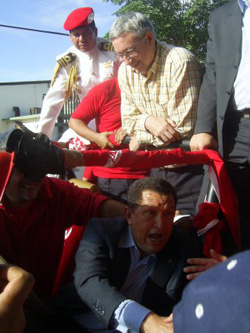 At the end of the event in Hotel Hesperia, a motorcade went through several municipalities in Nueva Esparta. This was led by a jeep driven by president Chávez and next to him was PSUV candidate for governor William Fariña, which is fighting the Adeco (oppositionist) governor of the state. Chavez was greeted with enthusiasm by the people. He then stopped the car and talked to those who surrounded it. At the beginning comrade Alan Woods was in another car a few hundred metres behind. But at a certain point a member of the presidential guard who was in the same car as Alan asked him: "Alan Woods? Is that you? A motorbike is coming to pick you up to take you to the car driven by president Chávez." So, a few minutes later a big bike picked up Alan and drove speedily, dodging the people and the other cars, until it reached the presidential car. Alan was lifted on to the car and he continued the caravan with the president. From the car it was clear how the revolutionary rank and file are still enormously enthusiastic towards comandante Chávez; men, women and children, all wanted to greet him warmly, showing their support for the revolution. During the journey, president Chávez talked to Alan Woods about several questions. In the middle of the fervour of the people, the president turned to Alan and said: "See, Alan, in spite of all the faults of the Bolivarian revolution, this revolution is still alive", something that could be clearly seen in the multitude which surrounded the car shouting "Viva Chávez!"

Then, with a gesture of frustration, Chávez said: "You see all this, and still we have not been able to win the governor here." And pointing at the candidate William Fariñas, he asked: "Alan, if this man is elected, what should he do?" To which Alan replied straight away: "He must listen to the people, understand their message and carry it out". "Precisely", said Chávez, "but that is the problem that we are facing. Some governors, after being elected lose contact with the rank and file. They surround themselves with rich people, beautiful women, etc. and lose contact with the people. This is an ideological problem. As long as we do not have governors who are ideologically prepared we will always have the same problem. We must win the battle of ideas. You are a good writer, why don't you write some pamphlets explaining the ideas of socialism in a simple way? Here we could distribute them massively."

Alan replied: "Yes, I can do that, and I agree that an ideological struggle in the party is needed, but also needed are mechanisms of control from below".

At this point, for the first time, the voice of the President sounded a bit tired: "I cannot do everything," he said. "It is absolutely necessary for the people to participate in this process and to take control in their own hands".

At that point the conversation was interrupted by the shouting and clapping of the masses, who once again surrounded and slowed down the car in order to reach President Chávez and give him their support, kisses and petitions. These are some of the contradictions of the Revolution which need to be solved.