Brazil
Share
Tweet
Yesterday, Alan Woods spoke at another meeting in the Camara de Vesadoria in Joinville, where around 200 workers had gathered to listen to him speaking on the general world situation. The meeting was introduced by Serge Goulart, leader of the occupied factories movement in Brazil, and present in the audience was also Roberto Chavez, the general secretary of the Bolivian Minersâ€™ Federation. 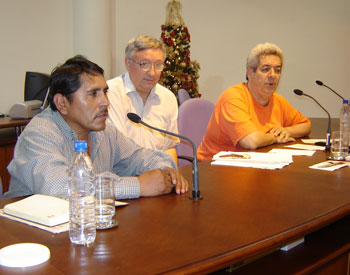 On the evening of Thursday 7th December, a second very successful meeting was organized with Alan Woods speaking to an audience of around 200 in the impressive modern building of the Camara de Vesadoria in Joinville. Among the international guests present were leaders of the Bolivian Miners' Federation, including the general secretary, Roberto Chavez.

The meeting was introduced by comrade Serge Goulart, who again translated from Spanish to Portuguese. Alan spoke on the general world situation, explaining that the general instability was a reflection of the impasse of capitalism on a world scale. He criticized the middle class "social movements" (pacifists, NGOs, feminists, ecologists etc.) who, while attacking the symptoms, were incapable of understanding the root causes or offering serious solutions:

"If you go to the doctor with a stomach ache," he said, amidst laughter, "you don't expect the doctor to get out a handkerchief and start crying. You go to a doctor to get a diagnosis of the nature of the illness and prescribe a cure. Only Marxism can provide us with a scientific explanation of the causes of capitalist crisis, and a guide to how to act." 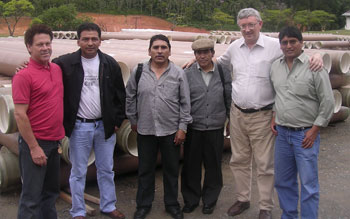 an then went on to stage a merciless attack on all those "ex-Marxists, ex-Communists, ex-Trotskyists, ex-Maoists etc.," who have abandoned the idea of socialist revolution and dedicate themselves to spreading confusion and scepticism in the new generation. He likened them to the dead fish one finds on a beach when the tide goes out. "The class struggle is like a tide that has ebbs and flows, and what is needed is a new flood-tide to sweep away all this rubbish and create new conditions for the revolutionary struggle."

He then proceeded to analyse the present situation of the world economy and the weak and fragile nature of the present boom. "Brazil has benefited from the high commodity prices in the boom, but what will happen to Brazil in the event of a slump, when prices will fall?" he asked.

"What is necessary is to organize the workers and peasants at rank and file level to fight to transform the PT, to fight for a socialist policy. It is necessary to nationalize the land, the banks and the big industries. Otherwise no way forward is possible for Brazil." 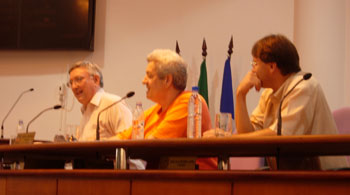 Alan sharply criticized those reformist intellectuals who have a contempt for the working people and talk about a "low level of consciousness" in the masses, that means that socialism is impossible. "It makes me sick in the stomach to have to hear this kind of argument, that I constantly hear repeated by these elements in Venezuela. In Venezuela it is the masses who have been the motor force for the revolution from the first day and who have saved it on three occasions from the counterrevolution. Was it a low level of consciousness in April 2002, when the workers overthrew the coup? Or in the bosses' lockout, when the workers occupied the factories, kicked out the bosses and bureaucrats and ran industry under workers control? No! It was a very high level of revolutionary consciousness on the part of the workers and the masses. And that is all we need to carry out the socialist revolution."

Turning to the leaders of the Bolivian Miners' Federation, sitting in the front row, Alan said: "The final answer to all these sceptics was given by the Bolivian working class, who in less than two years staged two general strikes and two insurrections, overthrowing two governments. I ask you: what more can we ask of the working class? What more could the workers of Bolivia have done? If they did not take power, it was not their fault, but because they lacked something that is essential to ensure victory: a revolutionary party and leadership."

In his short but effective speech to the meeting, Robert Chavez, general secretary of the Bolivian Miners' Federation, agreed with the fundamental points made by Alan. He agreed completely that the only solution for the Bolivian working class was to take power. "The working class must put itself at the head of the revolutionary movement," he said. He agreed that the proletariat could and should have taken power in the insurrectionary period that Alan had mentioned.

He said: "I want to make it clear that our union, as a proletarian organization based on a class programme, is not participating in the government of Evo Morales," although he defended the process against the reaction. "We demand that the government carry out the policies agreed in October 2003. The Bolivian Revolution is not finished, and we will continue to fight for socialist revolution."

At the end there were a number of interesting questions, but very limited time to reply. One speaker asked about Stalinism and the bureaucratic regimes of Eastern Europe. Alan replied that what had failed in the Soviet Union and Eastern Europe was not socialism but a bureaucratic and totalitarian caricature of socialism. He quoted the words of Leon Trotsky: a nationalised planned economy needs democracy as the human body needs oxygen.

Another speaker asked what a transitional regime to socialism would look like in Brazil. Alan said: "If you want a concrete answer to your question, go and take a look at CIPLA. There you will see how the workers are able to run a factory with complete democracy, with no bureaucracy or privileges. And if the workers are able to run CIPLA, why should they not be able to run the whole of society in the same way? Brazil is not a backward country as tsarist Russia was in 1917. The introduction of a nationalized planned economy in Brazil, with its powerful industrial base and large and educated working class, would not lead to a bureaucratic degeneration, particularly if it led (as it surely would) to successful revolutions in the rest of Latin America.

"Just look at this marvellous country of yours," Alan concluded. "It is a colossus, almost a continent within a continent. It has everything necessary to build a new and better life for all: industry, rich agricultural land, oil, minerals, water, forests, a vibrant and energetic people. If all these resources were mobilized under a socialist planned economy, what could you not achieve? In two five year plans, every man, woman and child would have a living standard higher than the average citizen of the United States. Then it would not be a question of the USA invading Brazil, but of US capitalism fighting to prevent a socialist revolution in the USA.

"The capitalists have had 200 years to show what they were capable of achieving in this great continent of Latin America. What have they achieved? They have turned what ought to be a paradise on earth into a living hell for millions of people. The capitalists have had their chance. It is high time they were swept into the dustbin of history where they belong. I am not religious and I believe that we only have one life. We must fight to make it fit for men and women to live in. Under socialism, we will turn Brazil and Latin America into a beautiful garden - a paradise in this world."