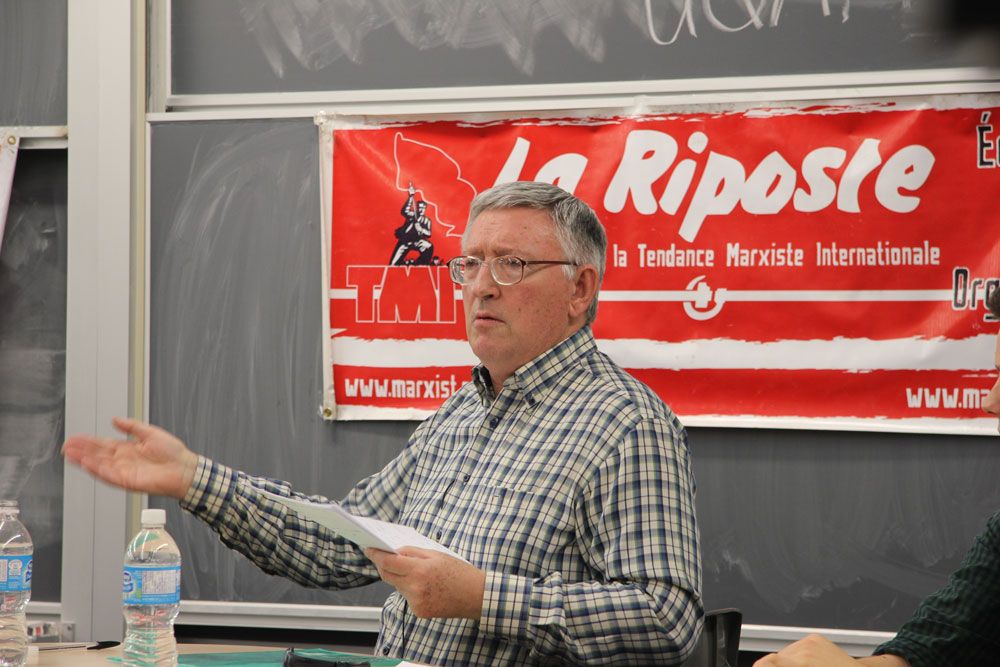 Over 70 people filled the room at the SH pavilion of the Université du Québec à Montréal in the first Québec event of Alan Woods’ North American tour. The event was a great success, with Alan speaking about the events of May 68 in France, a topic very relevant to Québecois workers and youth inspired by the recent student strike.

Alan began by congratulating the youth on their victory, and noted the importance of the struggle they carried through. He apologized in advance that though his French was once fluent, he hadn’t had opportunity to speak it in quite some time. But the audience was friendly, the apology was unnecessary, and he spoke in French for over an hour. The alternatives Alan had offered – to speak in Russian or Spanish – were also thankfully unnecessary.

On the events of May 68, Alan warned that it is vital not to make the mistake of regarding the events as purely a student struggle. He went on to explain how before the struggle began, no one predicted it. In fact, the bourgeois press held France up as an example, in comparison even with Britain.

Not only the bourgeois, but even the “left” in France dismissed the possibility of any sort of upheaval. They focused elsewhere, and many raised the idea that the working class either no longer existed or no longer played a decisive role.

But as Alan explained, all of these ideas were proven wrong by the facts of May 68. The student conflict may have begun with the bedroom politics of university residences, as one audience member very much wanted to remind us, but it very quickly touched off something much bigger. Alan pointed out that it was not the students that made May 68, but the general malaise that existed in society, needing nothing but a spark to light it.

When the Sorbonne was closed for only the second time in 700 years, the first being under the Nazis, conflict began with the riot police attempting to clear the occupied campuses. Students tore up the pavement stones and threw them at the police who were charging them. Barricades were put up, very much in the French tradition, as Alan put it. Soon workers were throwing their flowerpots from the balconies down on the heads of the police who were beating students below. A mass demonstration of 200,000 workers and youth, reflecting the indignation against the attacks, was organized. The main slogan was “De Gaulle, assassin!” And soon after that, strike action began, with places like the Citroen factory being some of the first.

It was not long before the strike paralyzed all of France. As Alan said, only 4 million workers were unionized, but at its height, the strike brought out 10 million workers. All this while the reformists leading the Communist party and the heads of the trade unions did all they could to keep the movement back, trying to treat it as nothing but an economic strike, but a general strike poses the question of power: “who is the master of the house?”

Peasants joined the movement, giving food to the strikers, and joint worker-peasant committees were formed. Alan mentioned that while the strike had paralyzed everything, food still needed to move or else the strikers would die of hunger, but the committees were formed so that this food would be under the control of the workers. Price controls were agreed with the farmers and, for example, milk which cost 80 centimes before the strike was now sold at 50 centimes. 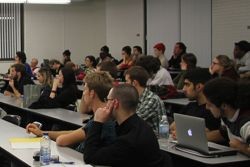 It was not long before De Gaulle made the analysis that he was finished. The American ambassador asked him, “What is going on in France?”  His answer was “the game is over; the communists will be in power by the end of the month”. He flew to Germany to speak to the French generals still stationed in the occupation there. There is no record of this conversation, and as Alan said, he was not invited for some reason, but he made a guess as to what the conversation was about. “Can the army be reliably used?”… “doubtful”. The Times of London made the analysis that the army could possibly be used, once, before it would shatter as soldiers questioned being sent against their families.

While the slogan of a popular government caught on, and everyone clearly saw that the possibility was there for something new, the Communist Party held the movement back and did not carry it through to the end. But Alan explained we must be positive, this movement shows that not a light bulb shines, not a telephone rings, not a wheel turns, without the permission of the working class. That the workers have an enormous power in their hands, and basing ourselves on this power, the movement can achieve victory.

We had a very interesting discussion following the presentation, with some audience members questioning the existence of the working class, ironically echoing the “lefts” half a century ago who said that a movement like 68 was not possible. This was responded to by a worker in the room, who said: “I’m a worker, I work in a mall, with my hands, and I find it odd to always hear students telling me how I do not exist”, a response which provoked laughter in the hall. Another individual questioned the power of workers to bring society to a halt, saying it has never happened. But of course, the discussion was about May 68, when precisely that happened, and facts are stubborn things.

In his reply, Alan comprehensively demolished the argument that the working class did not exist. Pointing to the light bulb, he said “Who do you think put that light bulb on? Was it done by magic?”  He sharply criticized some students for being completely out of touch with the real world. Quoting from Baudelaire’s poem “Les Aveugles” (The Blind), he said that people who denied the existence of the working class were simply closing their eyes to reality. His reply, as well as the speech, was warmly welcomed by the audience.

Overall it was a great step forward for the Montreal Marxists, who are enthused and ready to bring the lessons of ‘68 to today’s struggles. The comrades did not fail to make the parallels with the missed opportunity for a general strike during the Québec student struggle.

Alan summed up the meeting by saying in French, “Long live the heroic youth of Québec! Long live the unity of students and the working class! Long live the revolutionary struggle for socialism in Québec, in Canada, in America, and the whole world!”