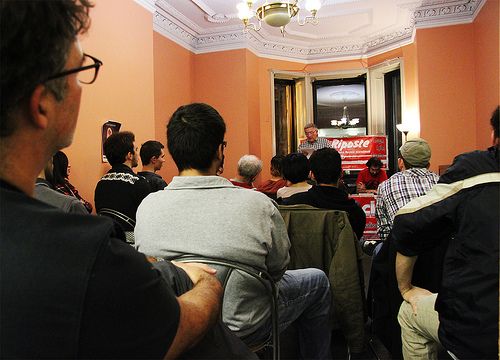 Alan Woods’ first tour of North America continues to be a big success. Over 50 came out on Tuesday evening to hear Alan speak at the Graduate Students’ Association building at Concordia University. This was the second event in Montréal, after the successful French-language event on Monday, and yet another important step forward for the work here.

The topic was “Prospects for Revolution in Europe and North America”, and the participants eagerly listened as Alan explained the crisis and the perspectives for working class movements in these vital areas of the world economy. Alan began by reminding the audience that according to bourgeois economists, this crisis was never supposed to happen. He demonstrated how these economists had taught for decades that the market would “self-correct” and that the kind of crisis we saw in the Great Depression is no longer possible.

After explaining that he has no respect for these economists, Alan contrasted them with another bourgeois “expert”, one who was more sober in his analysis, George Soros. Soros said the market was less of a pendulum drifting back and forth and more of a wrecking ball smashing everything on every swing. He quoted Paul Krugman, another more far-sighted bourgeois economist, who said that all the economic ideas of the last 30 years were, at best, spectacularly useless, and at worst, positively harmful.

Alan explained that many economists, who so thoroughly dismissed Marx’s ideas as “outdated”, have now run to read the three volumes of Capital, and can find no other explanation of crisis. Many now admit that Marx was right in his scientific analysis of capitalist economy, though that does not stop them from continuing to defend capitalism. 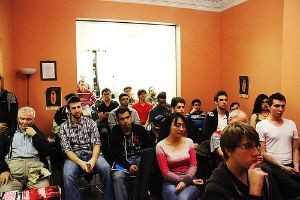 During the boom, obscene amounts of money were made by certain people, who would justify their multi-billion dollar bonuses by proclaiming that they “take the risk”. Of course, as soon as the crisis hit, these “risk takers” ran to the government begging for money. Alan asked, where is the risk in that?

Of course, these bankers and millionaires were bailed out to the tune of more than $1-trillion. But the state itself has no money and needs to borrow this amount.  In other words, we witnessed a massive transfer of debt onto the public purse. And Alan asked, who is supposed to pay for all of this? Greece is a perfect example of the results of this disaster.

Alan also spoke of the resistance that the workers and youth of Greece are mounting, with more than 20 general strikes in the recent period and the meteoric rise of the left-wing party Syriza. He showed how the same process is at work in Spain, in Portugal, and across Europe.

Directing the discussion on to the USA, Alan showed that the idea that the American workers are backwards and right-wing does not hold. He explained how the workers of Wisconsin, facing brutal attacks on their right to unionize and strike, took inspiration from the Egyptian revolution happening halfway around the world at that time. Faced with Governor Scott Walker’s offensive, they held mass demonstrations and raised the slogan, “Down with Hosni Walker”, comparing him to Hosni Mubarak, the deposed president of Egypt. Another inspirational slogan was, “Fight like an Egyptian,” proving that revolutions respect no borders. When the workers occupied the Capitol building in Madison, Walker sent the police in to clear them out, and they instead joined the workers. This is not the only example Alan brought out of how the mood in the US is becoming radicalized, but it makes clear that the crisis and the austerity are developing the class struggle.

As for Canada, Alan spoke of the student strike and warned that the students’ victory is not complete. The Parti Québécois cannot to be trusted, and that the PQ will raise tuitions once again, because the crisis leaves them no choice.

We had a very good and wide-ranging discussion period, including is the leadership necessary, what happened in the USSR, what is the class nature of China, and the national question. In his reply, Alan pointed out that Marxists are not nationalists, but internationalists. Our first duty is to defend the unity of the working class in its fight against the common enemy, the bourgeoisie. He pointed to the catastrophic effects of the disintegration of Yugoslavia into its component parts as a warning to where bourgeois and petty bourgeois nationalism can lead: “As a Marxist, I am not in favour of erecting new frontiers. I’m in favour of tearing down all frontiers and creating a socialist world commonwealth.” He warned that the bourgeois and petit-bourgeois nationalists always betray the national interests of the people, pointing to Ireland as a prime example of this. After 30 years of armed struggle, in which over 3,000 people lost their lives, Adams and McGuinnnes just put on smart suits and have joined a coalition together with the reactionary right-wing Ulster Unionists like Ian Paisley. “Today, the cause of Irish unity is further off than any time in history”, Alan added. He warned the people of Quebec to have no trust in the bourgeois nationalists of the Parti Québécois, but advocated support for Quebec solidaire and the creation of a strong Marxist tendency in that party.

Later, Alan explained that the reason why many young people reject the idea of political parties and leaderships is because of the disgraceful conduct of the leaders of the existing parties and trade unions who are not giving any lead to the workers and youth. However, he poured scorn on the idea that the class can do without leadership:

“The idea that we can do without a leadership is not even logical. If you buy a pair of shoes that pinch your feet, do you draw the conclusion that you have to go barefoot? No, you go and look for a decent pair of shoes. If you go to a restaurant and get bad food, do you draw the conclusion that you must stop eating altogether? The alternative to bad food is not no food, but good food. Why should things be any different when it comes to the labour movement? What is necessary is not to launch yet another “mass revolutionary party” — you already have too many small revolutionary organizations in Canada! What is necessary is to build a powerful Marxist tendency which is able to find a road to the masses through patient revolutionary work in the existing mass organizations of the working class.”

Alan finished by saying that he had not come to Quebec as some kind of academic lecturer but as a Marxist, a revolutionary, an internationalist and therefore a member of the International Marxist Tendency, which he invited people to join. At the end of the meeting, a large number of people indicated that they intended to accept this invitation.