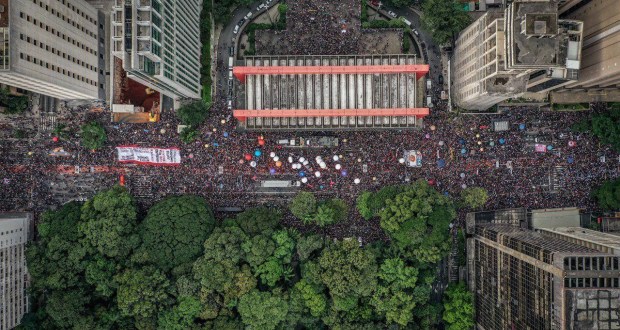 This statement was produced by the Marxist Left, Brazilian section of the International Marxist Tendency, after the mass demonstrations against cuts to education and the pension counter-reform in Brazil last week. It analyses the meaning of that outburst of anger, the splits within the government and the way forward for the movement.

The demonstrations on 15 May were massive, with strong youth participation, and expressed the militant mood amongst the masses. According to CNTE (National Confederation of Education Unions), about 2 million people took to the streets.

The rallies across the country reflect the sharp increase in the national political instability, a feature of the international situation, at the root of which is the crisis and decay of the capitalist system.

The Brazilian economy is stagnant. After meagre 1 percent growth in 2017, and 1.1 percent in 2018, the first quarter of 2019 will end with a fall of 0.68 percent, according to the Central Bank's forecast. The dollar rises and stocks fall. Unemployment continues to grow, with more than 13 million people looking for work.

Less than five months were necessary to break the illusions of a significant number of those who voted for Bolsonaro, believing that he would be an alternative to the existing system. Now they realise his speeches were a farce. Even before the demonstrations, popular support for the government had plummeted to 32 percent (according to Datafolha).

Pouring petrol on the flames

Bolsonaro's recent trip to the United States, with his entourage, in addition to the first one held in March, was yet another demonstration of the servile character of the government towards imperialism (he saluted the American flag, praised the US as a model, etc.). The Minister of Economy, Paulo Guedes, took the opportunity to announce the "merger" of Banco do Brasil with the Bank of America (in reality, a sale). There won’t even be the ritual of phoney auctions, such as those undertaken to privatise Vale do Rio Doce, or the subsidiaries of Petrobras. This is a pure-and-simple hand over of Banco do Brasil to a US bank: as "freely" decided by the finance minister!

The political crisis is developing rapidly and the president is throwing more gasoline on the flames. The fact that he called millions of demonstrators "useful idiots," "imbeciles," and "masses of manoeuvre" is clear evidence of this.

The bourgeoisie, which was already impatient with the new government, has intensified its criticisms after the demonstrations. On the day, Veja magazine published a report on the actions of the State Prosecution against the president's son, Senator Flávio Bolsonaro, on suspicion of money laundering.

The Bonapartist Bolsonaro is increasingly coming into conflict with the state institutions of the bourgeoisie, and his base of support is split / Image: Fábio Rodrigues Pozzebom

On 19 May, an editorial in the newspaper O Estado de SP entitled ‘The government against the economy’ concluded: “Jair Bolsonaro confirmed once again on Friday the government's ability, and especially that of its boss, to cause confusion and harm the country.” To harm the country, obviously, is to undermine the interests of the ruling class.

The newspaper refers to a particular incident, pertaining to an article published and recommended by Bolsonaro in WhatsApp groups. The article says that Brazil is "ungovernable" outside the influence of "conchavos" (conspiracies), and presents the Bolsonaro government as a victim of "corporations". The "corporations" would be the "politicians" (National Congress), the "trade unionists in togas" (STF and judiciary members), as well as "syndicalist servants" and "business groups well positioned in the web of power." In the days that followed, Bolsonaro maintained this line, and shared through social media a video of an obscure pastor, declaring that he was "anointed" by God to govern the country.

Bolsonaro's conflict with the parliament and the judiciary is progressing. He seeks to place himself above these powers, to reinforce the Bonapartist character of the government. His attempts to appeal to the masses is a characteristic of Bonapartist regimes, where the Bonaparte seeks to rely directly on the masses to combat the institutions that might restrict his actions. The aim is to impose a "government of the sword," which he directs without any outside control, to pursue his policies of submission to financial capital and imperialism, and to attack the working class.

In an attempt to respond to the demonstrations on the 15th, Bolsonaro supporters have been summoned to action on 26 June. The call included demands for the impeachment of Gilmar Mendes and Dias Toffoli, both of the Supreme Court; support for the Moro's anti-crime bill; support for the "New Social Security" and, of course, personal support for Bolsonaro. However, Bolsonaro's supporters are split. The result is that the character of the rallies is likely to be more fervent, but they will be far smaller. Government MPs Janaina Paschoal and Joice Hasselmann have come out in opposition to these rallies. The MBL (Free Brazil Movement) is also "unconvinced" about the call. The division in the ranks of bolsonarismo is becoming evident.

These demonstrations might gather a few thousand, but they will not compare to the mass, petty-bourgeois rallies assembled in 2015 and 2016 for the impeachment of Dilma, which had the advantage of being called with support of the Globo Network and against a government that was in the midst of a recession. They will also be smaller than the rallies in support of Bolsonaro during last year's elections, in the face of the government's loss of support. Obviously, a few million still support Bolsonaro, but whether they are willing to come out onto the streets to defend the government is a different matter.

What is certain is that these mobilisations will be quantitatively and qualitatively smaller than the rallies of 15 May.

The "Fora Bolsonaro!" (Bolsonaro Out) slogan, which was adopted by different demonstrations on the 15th, is on the rise. The Marxist Left has defended this slogan, despite the fact that leaders and organisations of the left have argued against agitating for it. Haddad, Dilma and the PT rejected the slogan, arguing that a “crime of responsibility” was necessary to ask for the president’s impeachment, maintaining their reactionary stance of defending the institutions of the state. They specifically defend Bolsonaro's right to fulfill his presidential mandate until the end. Using different arguments, other tendencies of the PT (O Trabalho, CSD, etc.); the PCdoB, PSTU, PCB; the majority of the leadership of PSOL and other tendencies of the party (Insurgência, MES, Resistência) also opposed raising the slogan “Fora Bolsonaro”. 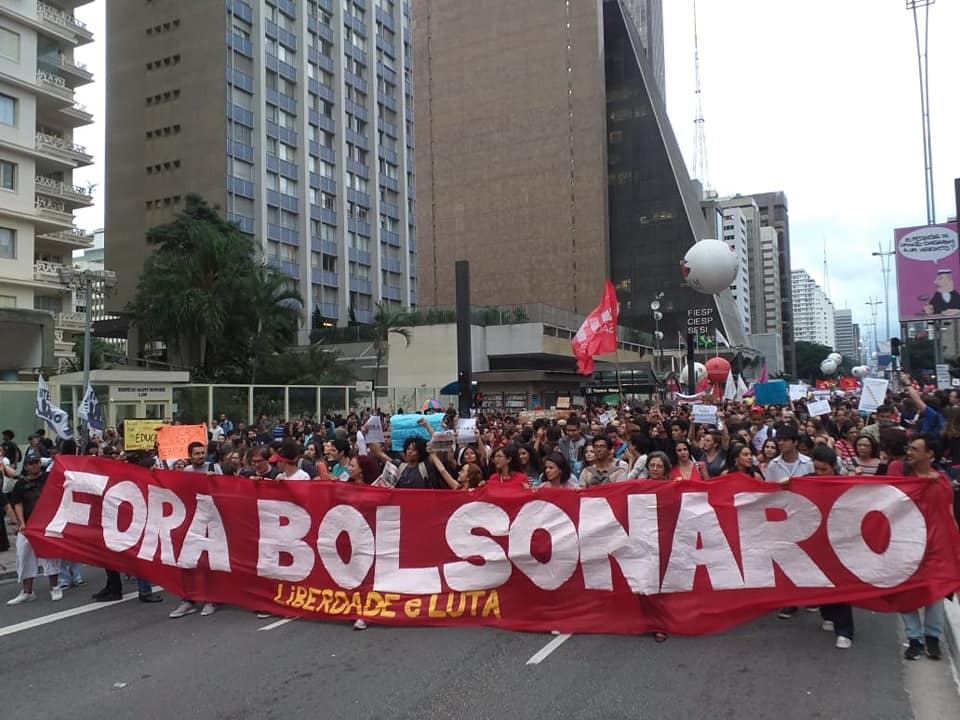 We raise the slogan “Fora Bolsonaro” because we understand that this fight has the potential to politically mobilise young people and workers, and could progress toward a revolutionary situation / Image: Liberdade e Luta

Day 15 was a lesson for leftist organisations that insist that we are going through a "conservative wave," or the rise of "neo-fascism." What exists, in fact, is hatred of the system, and an increasing willingness of the rank and file to fight back.

The bourgeoisie is distancing itself from the government, but it is not yet determined to get rid of Bolsonaro. Meanwhile, the deputy president, Mourão, continues to present himself as a more "sensible" alternative. Lula also tries to put himself forward as an alternative to guarantee social peace and revive the credibility of bourgeois institutions, this is the fundamental political message of his recent interviews.

The Marxist Left defends the slogan “Fora Bolsonaro”. We raise it because we understand that this fight has the potential to politically mobilise young people and workers. The fall of Bolsonaro would be a victory for the proletariat and a defeat for the bourgeoisie and imperialism. Such a movement could open up a revolutionary situation in the country. The Fora Collor movement in the 1990s was of this character, and was only restrained because Lula and the PT legitimised the swearing in of Vice-President Itamar Franco. Today, Lula and PT do not have the same authority over the labour movement as they had in 1992.

The precise way in which this situation will develop cannot be predicted. What is certain is that what happened on 15 May will progress.

The UNE (National Union of Students), under pressure from the mobilisations of the rank and file, has called new demonstrations against the cuts in education for the 30th. The CUT and the union confederations announced on 1 May a General Strike Against the Pension Reform for the distant date of 14 June. Despite the fact that the leadership is blocking the movement, resulting in the lack of a proper mobilisation of the ranks by the UNE and CUT, the masses must express themselves again on those dates. The Marxist Left calls on everyone to join the rallies on the 30th and the General Strike on 14 June. It is possible to win, it is possible to overthrow Bolsonaro, it is possible that a revolutionary situation will open up in this country to advance the struggle for socialism.

The Brazilian section of the IMT stands as a tendency of the labour movement, and as the embryo of the revolutionary party capable of helping the working class to take control of society. Great mobilisations and even revolutions can be defeated if a leadership capable of gaining the confidence of the masses is not built in advance. The movement of June 2013 was dissipated and diverted by the absence of such a revolutionary leadership, which the revolutionaries of today have the urgent challenge to build. Join us in this fight!

Down with the pension counter-reform!

Free public education for all! Against the cuts in education and science!

Non-payment of the debt!