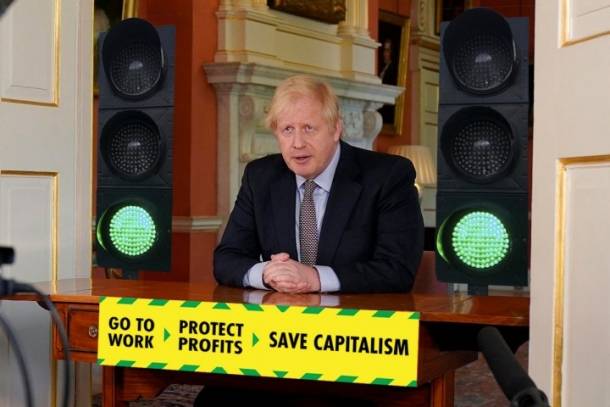 Last night’s speech by the Prime Minister has left everyone confused. But the main message was loud and clear: workers are expected to put themselves on the line for the bosses’ profits. The unions must fight for workers’ control.

The government’s much awaited ‘easing’ of the lockdown has ended up in a welter of confusion. In a pre-recorded speech last night, Boris Johnson left the entire country none the wiser about what comes next.

When Boris’ bluster and spin is cast aside, what is left? A green light for big business to call their workers back to work so that their profits can begin flowing again. Workers are being cast into the meat grinder in the interests of the bosses’ profits.

Construction and manufacturing are to start up as soon as possible. The message to these workers was: work from home “if you can”. No doubt managers everywhere breathed a sigh of relief. Builders, labourers and factory operatives await recall back to work.

Meanwhile, workers were told to use their car, cycle or walk, and to avoid public transport “where possible”. Where that is not possible, again for the poorest workers, they will just have to take their lives into their own hands on their daily commute.

Already the death rate among unskilled workers is three-to-four times what it is among managers and professionals. That gap will now widen as the Tory government courts a catastrophic second wave of the virus that will cost the lives of thousands of working-class people.

The headline-grabbing take home message from Boris’ speech is that the self-explanatory slogan, ‘Stay Home, Save Lives’ has been dropped. In its place is the new slogan of ‘Stay Alert’ - as if COVID-19 is something that might creep up on us.

The eagle-eyed have noticed that whereas the ‘Stay Home’ image included a red and yellow border, a universal symbol for ‘hazard’, the new ‘Stay Alert’ image includes a ‘safer’ yellow and green border.

Millions have been left asking, “What are you trying to say, Boris?” Does this mean we can go out or not? Or is this just a ‘green light’ to business that they have your backing in getting workers back in work?

Whatever he was trying to say, Boris solemnly assures us his message was backed by ‘science’. Presumably this is the same school of science that qualifies Dominic Cummings to sit on the government’s Scientific Advisory Group for Emergencies (SAGE).

To help the country get back to work safely, Boris’ boffins have produced for us a helpful COVID Alert System.

To prove this alert level is backed by ‘science’, a formula was flashed on screen: “COVID Alert Level = R (rate of infection) + Number of infections”.

All clear? If not, don’t think too hard about it. It’s all there simply to reassure you that the government isn’t just throwing workers in front of a moving truck because the bosses asked them to. The divisions in the government are what have led to this farcical response / Image: Socialist AppealAs government ministers tried to shed light on what was meant by Sunday night’s address, it turned out the general public weren’t the only ones confused. Dominic Raab in particular didn’t seem to know what the advice on meeting family members was. We were also informed that Boris said workplaces would open Wednesday; he meant Monday.

The confusion is hardly surprising when we consider that Boris actually presented the change of course as a fait accompli to his Cabinet on Sunday, in order to avoid a factious debate on the issue. The national address had actually been recorded on Saturday, a day before the Cabinet met to agree a way forward.

The divisions in the government are what have led to this farcical response. One part of the Tory Cabinet and backbenches - the part most closely aligned with big business - is desperate to end the lockdown. The billionaires are losing money hand-over-fist as long as the lockdown continues. Furthermore, the Treasury are worried about the accumulating cost of the furlough scheme.

Another section of the Tory Party wants to keep the lockdown in place, fearing a devastating second wave if it is eased (which SAGE predicts could kill in excess of 100,000 people). Above all, they are worried about the political consequences the government will face on account of their responsibility for it.

The product of this split is what we saw last night. On Sunday, as the Cabinet met, Boris began with an apology to the health secretary, Matt Hancock, for an attack on him in the Sunday press. It is hard to sympathise with a Tory minister, but clearly Hancock is being prepared to take the fall for Boris and the catastrophic response of his government.

In the snake’s pit, briefings and counter-briefings are the norm. As such Boris failed to give his ministers any preparatory documents for this all-important meeting, however. Why? Because they might run to the press with them!

His ministers, for their part, complained bitterly that the first they had heard of the notorious ‘Stay Alert’ slogan was from the daily papers.

Last week there were around 5,000 new cases of coronavirus diagnosed each day in the UK; and around 500-600 continued to die daily. The government could hardly issue the message that it is safe to go back to work.

The Tories want to urge people back to work and get profits flowing again. Yet they flinch at the thought of taking responsibility for such a policy. Hence the meaningless ‘Stay Alert’ slogan. The government is trying to make it look like it is doing something, while subtly shifting responsibility for containing the virus onto the shoulders of individual workers.

The dash to exit lockdown The lockdown in Wuhan - far more comprehensive and effective than the ‘lockdown’ in Britain - was only finally eased last month after three months in operation. But China was unable to reap any great economic benefit by being the first one out of lockdown. The Chinese economy depends on foreign exports, and most of its markets are now closed because of the lockdown.

Under this mad economic system, however, there most definitely is a disadvantage in being the last one out of lockdown. As demand partially resumes and your competitors make a dash to grab your markets, as soon as one or two countries come out of lockdown, the pressure is on for others to follow suit.

As such, despite the fact that the outbreak is far from being under control in Europe or the USA, and despite these countries entering lockdown at very different times, they are all beginning to leave lockdown in quick succession.

Austria began easing the lockdown on 1 May. While schools are to remain closed in Italy until September, factories, building sites and offices opened on 4 May. Belgium, France and Britain will begin reopening businesses from today. On 18 May, the government in Ireland intends to begin lifting restrictions in stages. Each is relaxing the lockdown out of fear of competition from the others.

The result will be a devastating second wave caused by the insatiable appetite of the bosses for profits, and their division into nationally competing gangs.

Germany may in fact already be at the start of a second wave of the virus. Only days after the lockdown there was eased, scientists have tentatively put the reproduction rate of the virus at 1.1. Anything over 1 indicates that the spread of the virus is accelerating. The Socialist Campaign Group of Labour MPs have rightly called Boris’ plan “a thinly veiled declaration of class war”. This is absolutely correct.

In the absence of any real leadership from the official Labour leader, the trade unions, who have a controlling influence on the NEC, must link up with socialist Labour MPs to put pressure on Starmer and the Shadow Cabinet to break with this nonsense about “national consensus”. There can be no such thing. Either the bosses will get workers back to work or the workers will stop them.

Reflecting the pressure from below, even the right-wing unions have been forced to oppose the government’s plan.

In a letter to the Observer, the general secretaries of the TUC, Unite, Unison, the GMB and Usdaw all came out against the government’s plan for returning to work. The content of that letter, however, indicates that the unions have not drawn all the necessary conclusions from the “class war” methods of the government.

The letter calls for an overhaul of workplace health and safety. In particular, it demands that the government force employers to carry out public risk assessments; that sanctions are issued against employers breaking safety guidelines; and that more HSE inspections are carried out.

But we cannot leave it to employers to carry out risk assessments. Workers on the shopfloor know best about what adjustments can and should be made, and what the greatest source of risk is for workers.

Furthermore, the bosses cannot be trusted not to cut corners to save a few pennies at the cost of our lives. The trade unions must raise the question of workers’ control as the only way to make workplaces safe.

We can’t trust the government to police the bosses, that much is clear. The bosses aren’t going to fear the sanctions of the government - because it is their government!

There has been too much reliance in recent decades on the ‘independence’ of the state and the law courts. The only ‘sanctions’ that will stick will be the ones that workers issue themselves - via strike action!

The trade unions must be prepared to carry out coordinated action to shutdown production and save lives.

A number of unions have already pointed out that there is a legal basis for calling walkouts without jumping through the usual legal hoops that the government has laid out to stop strike action. Section 44 of the Employment Rights Act (1996), for example, allows workers to be called off site if there is an imminent risk to their lives.

At any rate, if the unions call coordinated, joint action, the bosses, the government, and the courts will be impotent. There is no force on earth that can stop the working class when it is united and organised.